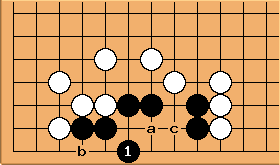 makes miai of a and b. At the same time, it protects against a placement at c. The shape composed here, recurs in problems 18 and 34. I'll call it the oki wants ikken tobi for now. 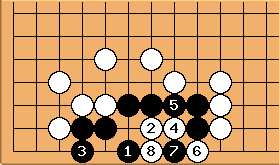 White makes a placement at

, but Black calmly takes the miai point at

. White seemingly connects underneath, but Black has the throw in tesuji at

White is in shortage of liberties. Look how

here, then White plays at

, threathening to connect at a. 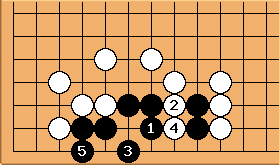 must not be played here! Then

lives, after sacrificing the two Black stones on the right. Of course, if

makes the mistake of playing at

to save the two stones, White plays the placement at

and Black loses everything instead. 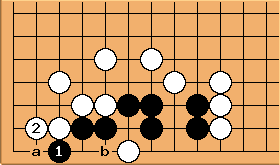 Black's strongest play is at

, threatening to make an eye in the corner. If

plays at a, Black can make a nasty ko at b. 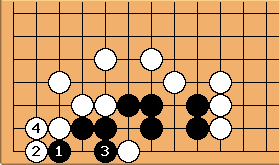 ChrisR: How does Black continue? Seems Black's group is dead. 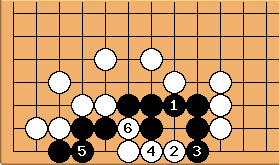 attempts to create a seki. However,

is a tesuji that will kill Black. 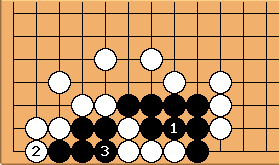 try to make a bent four. 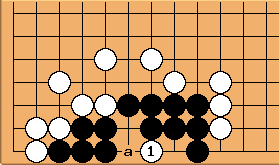 But the placement at

kills the entire black group. If

carelessly plays atari on the five black stones at a, Black lives at

instead, with the under the stones technique.

KarlKnechtel: For completeness, note Black cannot live via under the stones by sacrificing six stones either: 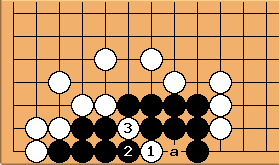 White is forced to capture at

(!) because otherwise Black captures at a and has two eyes. Black tries to continue via standard under the stones technique, but ends up almost filled with a dead shape (there is no need to force the issue with a play at a because of this filling):

Problem 37
Back to Kanazawa Tesuji Series