hotcoffee: Players feel free to add your name and add a move. 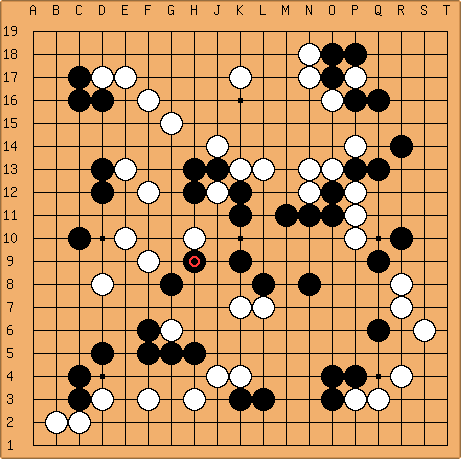 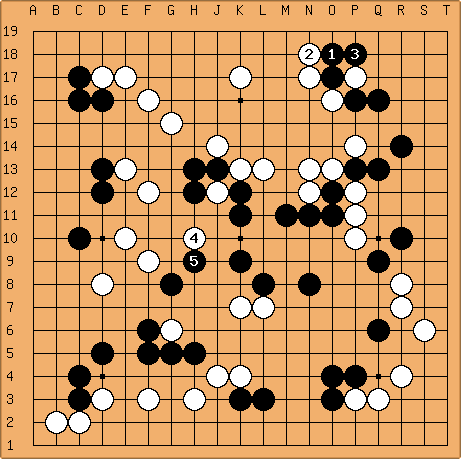 84: Alex: I think we're thick enough to tenuki. Furthermore, I'm still not willing to give up hope of an attack around here. 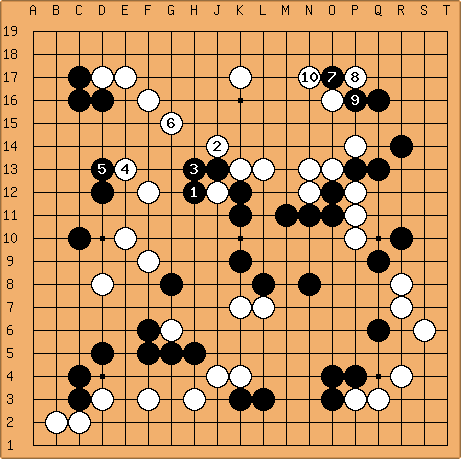 jwaytogo: Created a new board, same as usual. Maybe I will play a move, but will need to think some more.

72: QWerner: May be also the simple solution.

74: DJ: Uhm... better get the head in the open (sort of...)
Ehm, QWerner, have you considered whether the directions of your atari's (or the atari's themselves) are going to hurt some other of your groups? ;-)

Well, I want to save our territory on the top. But, you are right, so I have something to think. So (thx) seems you have to fix my 16 k misstakes :o)QWerner

76: Alex: It's slightly tricky reading, but I believe this connects our groups and also prevents much more intrusion into our territory.

77: IanDavis: Possibly a dubious way to settle the corner 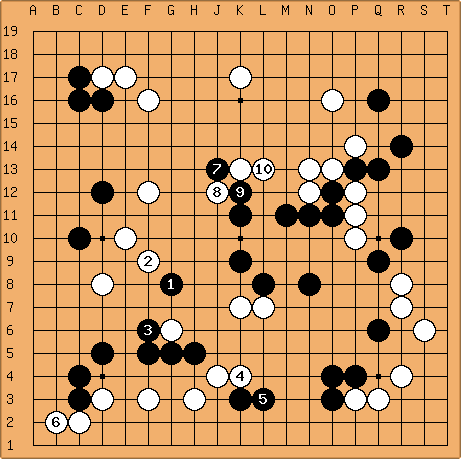 61. jwaytogo: Our opponents are looking thin. Time to cash in...

62: Alex: This seems to fix our cutting points and shouldn't be too bad for our shape if we answer kikashi skilfully. I know I'm not supposed to play two moves in a row, but I'm trying to keep the game moving.

jwaytogo: Cannot fault you for wanting to keep the game going, I have been playing the first move of most boards just to do so. =)

): DJ: Leave for the time being the kikashi stone as aji and inject some substance in our center. It's a move I've been wanting to play for some time...

66: Alex: I'm a bit concerned about the health of this group. This should keep it nice and safe, and is not small in terms of territory. As usual, I also have some ulterior motives.

70: Alex: Whatever happens next, I don't think we can afford to let Black play here. 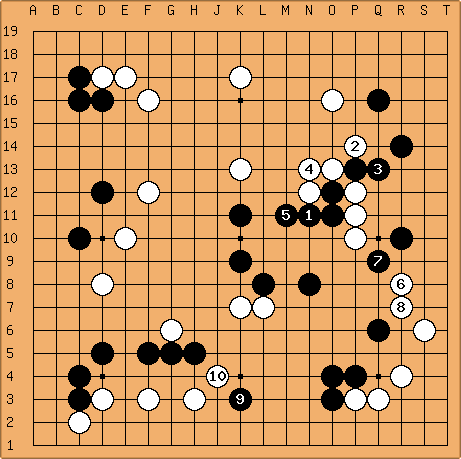 54. Alex: I think the 52-53 exchange was a mistake for us. I'd like our position better if we still had the option of the other atari. Either way, I think we still need this connection. Letting Black get the double atari and trying to squeeze is not likely to turn out well for us.

56: kokiri: no idea what dieter's talking about, but things have turned nasty in the centre

57. IanDavis: I have a feeling this may be weak, but weakness is why I played it

) DJ: Uhm, White lost something on this side, and two keima jumps make me uneasy... Let's reinforce, slow as it is!

60: Alex: I'm not too happy with how things are going, but I'm not going to give up on getting some sort of splitting attack yet. There's also some defensive value to this. 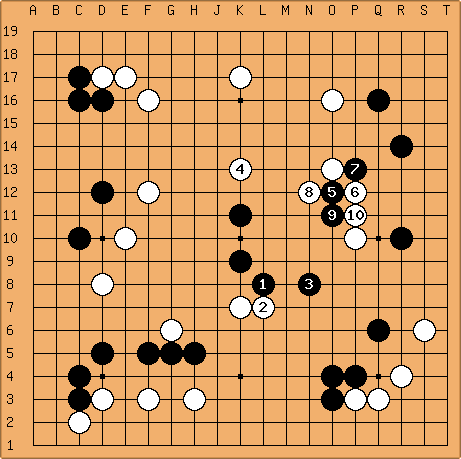 41: GoJaC Feigning self-confidence, start running.
Alex: When you play move 41, 51, 61, etc., you're supposed to start a new diagram. I've done it for you.
GoJaC Ah, now I understand. So in a way you play on "two boards" at the same time. (I thought new board was created on move 40.) Alex: Yes. The top board is to show the current move only. The boards below are kept (and a new board created every 10 moves) to keep a record of the game for discussion later. 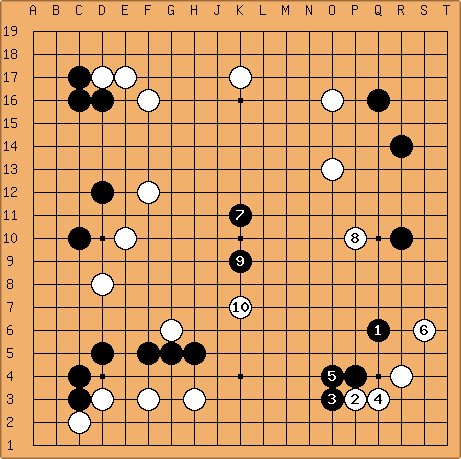 32: Mef: Trying to settle white, hoping this is the right way...

35: hotcoffee: Would not like to have to explain to my (hypothetical) sensei why I didn't automatically connect against this cut.

36: Alex: Would prefer not to get sealed into the corner in sente.

38: i was trying not to play 38, 'cos i have no idea what to do. Mistake ahoy! kokiri
QWerner: I was thinking about move 38. My choice would have been W K8. Can some one give me his thoughts about this move?

39: Definding the reduction stone, now that White stretches his sphere of influence, including a miai argument.

40: Alex: I'd really like to make Black heavy before attacking, but it's hard to decide which side to peep from and anyway, Black might not have to connect solidly. Therefore, I'm going to cap first and leave chances for kikashi later. 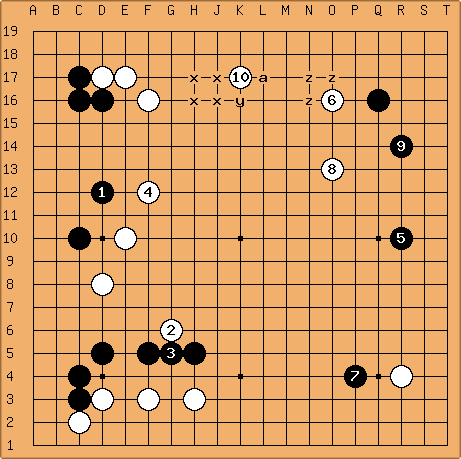 22: Alex - Seems like a useful kikashi on the road to light shape.

23: dnerra - connecting against peeps is one of the strong points in my game.

25: No idea where to play really IanDavis

hotcoffee - I'm glad it's not just me who couldn't find a move. My best guess was the hoshi adjacent to your move, but i frequently err towards influence at the moment.
DJ: My 2k mind would prefer to play

(move 25) in the other direction; then I would have difficulties in deciding among a pincer (points x), an extension (points y) and a shimari (points

and z). I was grateful that the white team could play

...
Could a stronger player please comment?
unkx80: I would think that 25 is in the wrong direction. Had 25 been played in the other direction, then White would have to worry even about the base of the stones in the upper left corner. When I meant I don't know what is the best play for 26, I meant I do not really know whether a move around a is better or another kind of corner approach is better. However, definitely the direction is in the upper side. Since I assess the situation to be unfavourable for White, I decided on the more aggressive 26.

27: revo: Taking the corner or attacking the 4 white stones in the lower left. White decides (I think...)

28: Alex: 27 feels like the wrong direction to me, so I'll tenuki. I think the top right is more urgent. However, I want a moyo, not the corner, so I won't make a double approach. This move feels good to me.

29: hotcoffee: There is great danger on the board, so the wrong move here could spell disaster - however black cannot risk another corner approach, possibly killing the hoshi, and certainly splitting it from 25. This move simply screamed at me to be played.

30: Alex: I didn't want to play two moves in a row for White, because it's kind of against the spirit of rengo, but it appears that no one else will and I don't want the game to die out. I think this, or one line below is pretty much the only move. 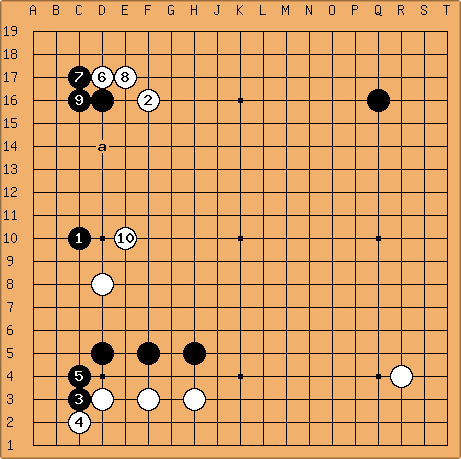 11: hotcoffee - i thought black might want a stone on the third line...

12: QWerner some influence on the upper side may be not bad

13: dieter: joining Black, who are shorter on dan grades.

16: kokiri: let's mix things up a bit
DJ: If you really wanted to stir up things perhaps you should have tried

18: Shaydwyrm: I don't like the looks of the crosscut, so I'll stick to the natural move.

20: DJ: Here I come, the Reckless DJ. Thought White has to do something here to contrast both Black's influence and framework... 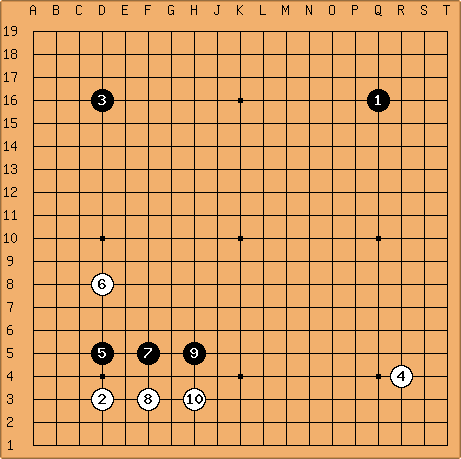 3:jwaytogo - Two rising stars are better than one.

4:Alex - Territorial openings are common for White in games with komi.

5: IanDavis this one's more popular than the Star Wars Rengo ;-)

6: Jared White is outnumbered 3 to two, both in stones, and players ... I'd better join up and play a stone to even things up.

8: Shaydwyrm: Can't get sealed in the corner here.

10: Mef: One good jump deserves another.

hotcoffee - I'm baffled by moves 8 and 10, but appreciate that they were made by players more than 10 stones stronger than me. Can anyone explain the reason why the one space jump was the ideal extension here?

Would a two space jump for

allow black to peep and gain thickness? If

was elsewhere (for example, settling

), would black have an intolerable advantage?

Perhaps a subpage for the discussion of moves 1-10 would be appropriate.

kokiri - locally i think a two space jump for

is ok (edit: see the joseki page) but that it would be hard to envisage a situation in which a one point jump with

then a two point jump with

was the right thing to do. Looking at the bottom right hand corner, it's noty clear to me that getting ahead of black on the left is important, nor can I see an urgent point that would lead me to tenuki at

. that said, neither looks like the end of the world

hotcoffee - Thanks for the link to the joseki page. My innocent mind had never been exposed to any more joseki than a simple "this is how to deal with a san-san invasion". Nice to see that my intiutive move 11 was well placed, even though it was badly timed by leaving some weakness under the black stones on the left.