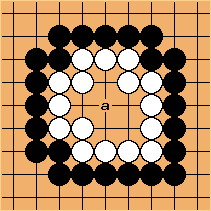 Of the six-point big eyes, only this one and rectangular six in the corner can be killed. Its vital point is a. It is known as the rabbitty six [1] or nutcracker. It is also known as the flower six, a direct translation of the Chinese and Japanese terms for this shape. 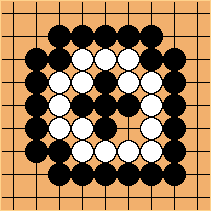 A rabbity six nakade can be almost filled to a crossed five (as shown) or a bulky five.

Robert Pauli: Problem 32 in David L. Silverman's Your Move (no other go problems): 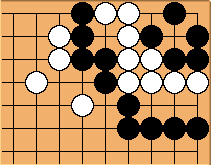 [1] The term "rabbitty six" was invented by James Davies. The shape vaguely reminds one of a rabbit's head; the ears are at the top left.

Robert Pauli: Did James really have the (t)y? In German the adjective-noun form sounds funny to me (hasige Sechs...ouch, not a hare, a bunny: karnicklige Sechs). BTW, is 'bunny'' also usable as adjective?
My favorite name for this shape is fish(y) six - makes sense in all directions.
Later...hmm, why not piranha six?

Andy James?: Can't say what Davies called it, but "bunny" is not an adjective in English (unless you want to invent a word for "like a bun.")

C.S. Graves: In his Graded Go Problems for Beginners books, Kano Yoshinori refers to it as the "Flowery Six".

anonymous: In Japanese it is called hana roku, literally flower six. I think rabbity six is pretty silly, especially since there is no English word "rabbity"

rabbity, a. Abounding in rabbits; somewhat like a rabbit. Also, suggestive or characteristic of a rabbit. Also Comb., as rabbity-faced, -looking adjs.

Pledger: I like the fishy six idea. The shape reminds me of those little goldfish crackers. Also, the common meaning of the word "fishy" (inspiring doubt or suspicion) works well here.

anonymous: Why don't we just call it the flower six? To me, it makes sense to use the same name as in Japanese and Chinese, instead of making up a new one.

afellig: Fishy six is a good title because it is representative of the shape while at the same time has a negative connotation that can help beginners remember that it is a dead shape.

fishbulb: um... is there any difference between this shape and the dumpling shape? looks identical to me, but with a silly name.

weston: A dango, or "dumpling shape," is more general but refers to a mass of stones without eyes and few liberties. A dango of six stones could be arranged in the same way as the empty points on a flower six, but not necessarily.

nowei: The Chinese 葡萄六(pu2 tao liu4) means "grape six", I assume this is partly because of the general shape but probably more because the killing move in the center resembles the seed of a grape. Grape six doesn't sound very cool though.