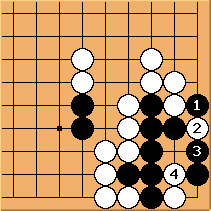 KarlKnechtel: (I'm putting in some "Advanced" level concepts here, but trying to explain them at a "Beginner" level. :) )

This is rather a sort of perverse case of "There is death in the hane", I suppose. ;) Black expects to make a slight gain by pushing into White's territory along the side, gaining one point basically. White throws a surprise by making a hane as well, even though it's in atari! Actually, this is a throw-in tesuji. Black captures, but when White plays at

, it's all over. There is no where for Black to make eyes.

So what went wrong? The mistake in

is that it lets White play

in sente. As seen on Ko threat exercise 3 where this diagram originally appeared, playing first at either

by Black will be enough to make two eyes. (The original discussion is about which is better.)

After the play at

, there is one eye at the bottom, and the top eye is sealed by playing at

. Those points are miai - since White can't play at both simultaneously, Black takes the other and lives. Note that miai are often a good source of ko threats, and indeed White would get one there. 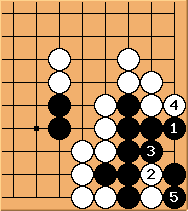 anywhere else, Black at

divides the space into two parts. This is White's first ko threat in this situation.

still divides the space into two parts, but White isn't done yet because of how the stones are positioned inside the bottom eye.

is the second ko threat, threatening to capture. Black must capture first, and is now safe. Of course, White would only play

as ko threats when an actual ko comes up; otherwise it's just wasting those threats.

Back to the original discussion. When Black plays

in the original diagram, White can play

and Black's safety is threatened - the player weak enough to play

probably doesn't even realize that at the moment, but is simply happy to capture a stone that White seems to be throwing away. Black is still doomed if he doesn't capture, though. For example, if he suddenly realizes the problem and plays at

in the original diagram to start making eyes, White plays at

and now that eye is destroyed - another miai situation. Once Black captures, he would like to play at

, making two eyes. But it's White's turn, and

Basically, Black got too greedy here. Originally either

would let Black live - but only if he played one of them right away. So those points weren't miai.

Now, I will work my mid-kyu magic, and remove four stones from the board without changing the situation! 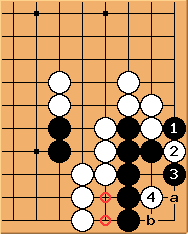 Here the same sequence of moves is played with the same result, despite the removed stones.

has reduced the space to bulky five and White, having the move, strikes at the vital point. (See life and death if you don't understand this.) Again,

would have resulted in life, as would

or even a, if I'm thinking clearly.

, but you have to realize that it doesn't really extend the eyespace anyway. The reason Black had enough space to live inside the rectangular six in the corner in the original diagram is, somewhat paradoxically, because of the stone at a (making it easier to divide the space) - though Black did need one liberty at

in the second diagram because of shortage of liberties.)