This page is in need of attention.
Reason: the page is in discussion mode and may be renamed to avoid confusion 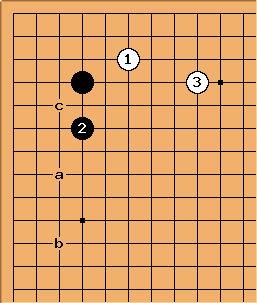 , leaves Black with a position which has bad aji with respect to the corner territory and the side.

If White later approaches from a, Black would maybe like to attack from the direction of b, but he cannot, since a white play at c makes it difficult for Black to get anything in the corner. If Black defends against White a in the corner, White can settle with b and later erode the corner from her stone at

. For this particular example, see also do not defend territories open on two sides.

Bill Spight: As I understand the term, aji has to do with flaws left behind in an established position. Perhaps a good translation is "aftertaste". Here Black's base doesn't really have defects. If Black does not extend along the left side, White can attack the two stones. I would not use aji to refer to this situation. 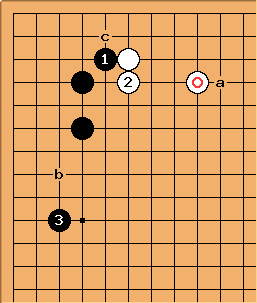 After the last diagram, it is not bad for Black to play tsuke at

, at which White must answer at

. This gives a slightly overconcentrated position for White, since she would have preferred

be at a now, but she mustn't be dissatisfied.

After this exchange, Black can best extend to

, in order to turn the upper left into a moyo that is almost territory.

is questionable here, if the centre matters in the game.

togo: There indeed is a problem with the assumption about White's answer: White could answer at c instead of

(and Black would have to answer that) or tenuki. Both would make

in itself does not gain much. Further into the play it could force White to decide between base and corner aspects; right now even corner invasion is still possible. 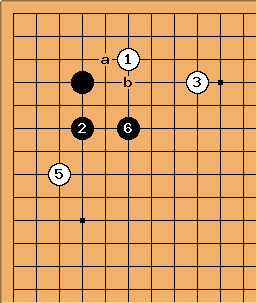 Black can also leave the position as it is, and play elsewhere. White can attack with

, and Black escapes into the center with

.
Without the exchange of Black a for White b,

has more effect on the white stones at the top.

There are many examples of aji including captured stones that still have their effect on the global position. I'll give a few of those shortly.

Hi Dieter, I see what you're saying, and I agree. My initial argument was that if Black left the position alone after

, he also left the corner and side open.

You suggest that the black tsuke, white nobi and black extension to

are a good development for Black and I agree. But the fact that Black has to play this (and loses sente) shows that the initial position had bad aji for him, no? I notice that b on your diagram had no comment in the text... I think that b here is still invadable, after Black 3, no? And, in my experience, so is san-san.

Another point is that with the hoshi-tobi position, Black clearly leaves the corner open in exchange for influence - it is not necessarily bad aji, but his fuseki strategy.