The diagonal jump, or hazama tobi, can be cut; however, one should read carefully what happens when one does so.[1] 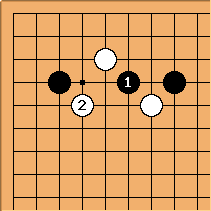 In this example, White has a good answer at

if Black tries to cut, so

is not a very good move.

3-4 point low approach, two-space high pincer has an example where this cut is strong.

Fan Hui explains in a recent book that this is bad shape for White, taken in isolation.

is called the "eye of the elephant". a and b are miai for Black - White has to avoid playing at one of these points as Black takes the other and White's shape suffers. The same holds for c and d.

Name change discussion (to be deleted sooner or later)

Bill: Since Cut the diagonal jump seems not to be particularly good advice, as the opening sentence indicates, how about renaming this page to Splitting the diagonal jump? (It's not really a cut, in go terminology.)

xela: I suspect that in amateur games it is often right to play in the middle of a diagonal jump, whereas pros are unlikely to play the diagonal jump if it can be split in this way. This is just my intuition, for what it's worth. Regarding a name change, I have no strong feelings either way (I think of it as a "cut" because if the other player plays at that point it makes a connection; but "splitting" also makes good sense).

Bill: The shape term, Elephant's eye, should have its own page. This page is about how to play. Maybe it should be a subpage of the Elephant's eye page.

Bill: A GoBase search revealed that, when there are no other stones nearby, the most common response in pro games was tenuki.

Bill: I meant that Black tenukis rather than jumping in between, not that White tenukis.

Malcolm: I guess that when pros play the diagonal jump, they always check that the elephant's eye move won't be good for their opponent.