I hope this question is not too ridiculous, but a recent game showed me again that I seem to lack a lot of the fundamentals of Go, so I would be greatful for every comment...

This is an early position in a 3-stone handicap game (me playing black against a 1-kyu): 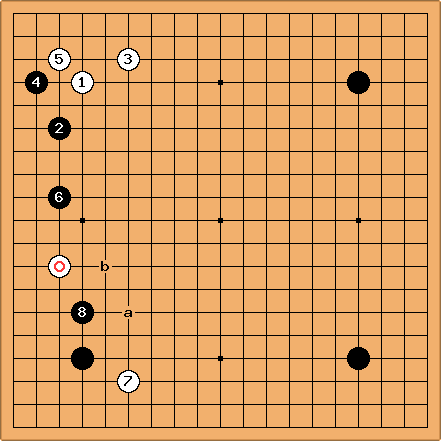 Singer - I recently learned that move 8 probably ought to be on the third line rather than the fourth, because White move nine can severely weaken the black corner position otherwise, but if the stones is on line three, it can still exert influence over the side and corner, but is more secure.

The question now is how to answer the last white move (circled). My thinking was that this stone was sandwiched between two stong black formations, so I thought priority for me was to prevent white from making a base and the game continued like this: 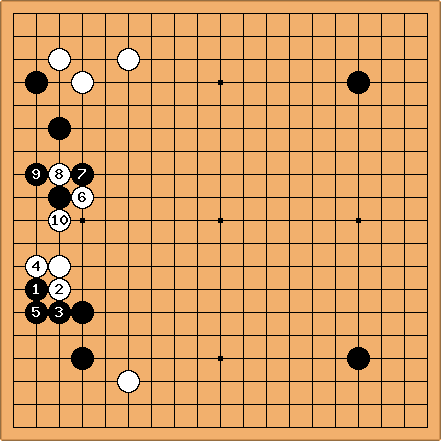 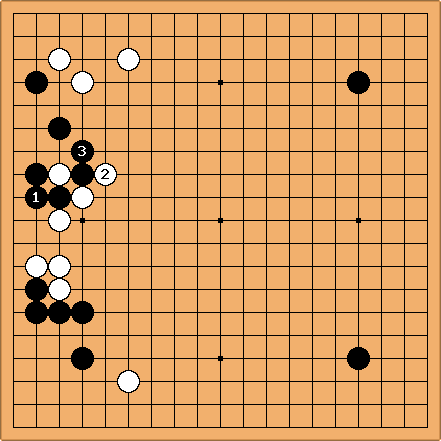 And white was able not only to settle his stones but also to create some influence.

After the game my opponent told me that playing at "a" in the first diagram would have been the proper response for black in the upper diagram and I had also been contemplating playing at "b", but I am still not too sure about it...

So could please someone explain how to properly handle the above position? I would be mainly interested in some general principles that would help me to properly address similar problems in the future. 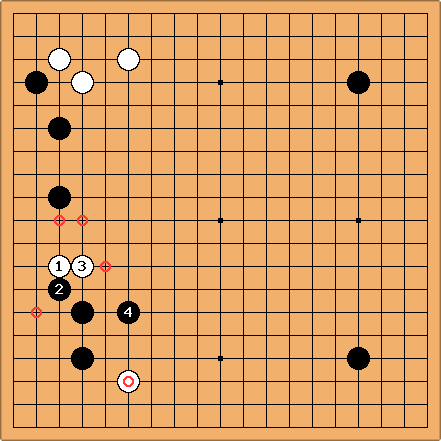 breaks the sector line and attacks both

. This is a natural, easy development.

iff: Go always looks so simple when is is demonstrated like this :-) Could you please show how white would handle the situation if black plays at 4 immediately (i.e. not exchanging 2 for 3 first)? 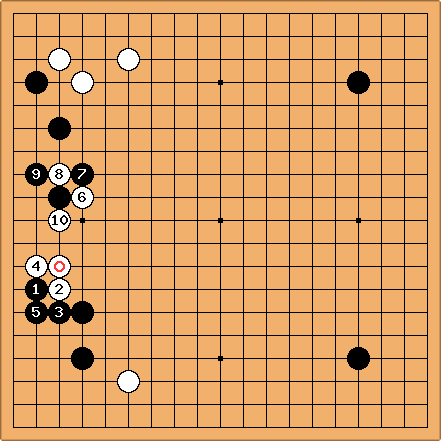 is a bit passive, and White can treat

, strengthening Black to no purpose.

is a natural reply, but in this case allows the crosscut,

, a light play which allows White to make shape with sente.

iff: Could you please elaborate a bit more why exactly after this 1 White can treat

in the above diagram white answers

. Is a black play at 3 in the above diagram so intolerable for white that a tenuki is totally out of the question there?

threaten? As for tenuki after the diagonal attachment, that's an admission that

Black should reflect upon the heaviness of

and friends and not allow White to play flexibly and make good shape. 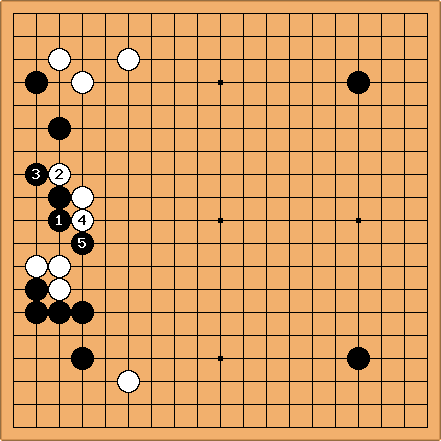 Bill: In a three stone game no one will criticize Black for playing

is the key point for White's shape. If

Bill: Black can make a misstep in the fighting, but this is the kind of fight you should welcome in a low handicap game. Black has a local advantage, and White has made some bad plays.

iff: Thanks a lot for your comments Bill. Clear and logical - very helpful for me. Could you also shed some light on the value of "b" in the first diagram (with the idea of confining white to a small life while creating influence for black)? Is that another sensible plan for black or is that nonsense?

Bill: I think that it's playable. However, it is a bit loose, leaving possibilities for White. Making White heavy before making the double attack is simple and strong. 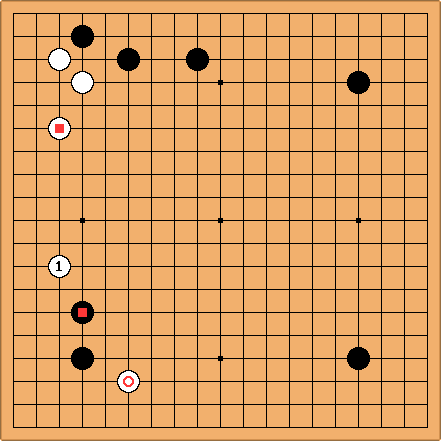 Suppose that the upper left looks like this instead so that

isn't sandwiched between two black positions. How should black play in this situation?

fractic: I'm not sure how to continue here, but why did black play

in the first place?

makes the left not very interesting for black so a play on the third line looks more natural to me.

AndyPierce: It's just an example. I'm looking for a contrast with ClumsyDoubleContact. 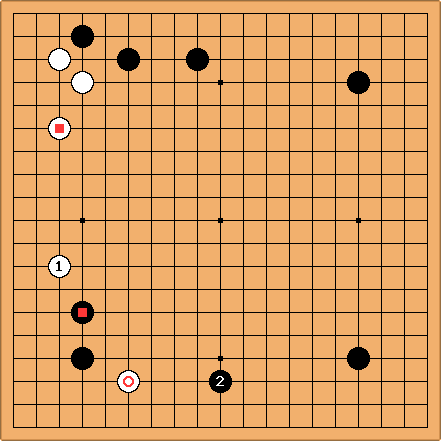 is the obvious choice. (It would have been my choice over

Bill: I have questions about /Earlier play.