Charles Matthews Here are examples given by Takagawa in an article translated in British Go Journal issue 8 from 1969. See

There is also a section on tsume at the beginning of the Takagawa Fuseki Dictionary.

John F. I felt comfortable with the examples given in the BGJ article. To me, the important thing is that a tsume has to block the expansion or development of an enemy group. A stable [bad word? obvious? viable? strong?] enemy group has to exist first. A one-stone group or a two-stone group three spaces apart does not look like a "stable" group to me.[1] Another way of looking at this, perhaps, is to regard tsume as a moyo-related term.

That was my initial reaction. I then checked the entry in the Fuseki Dictionary, and in my opinion it confirms my reaction. Under "Definition of tsume" it says: "We call an extension that presses closely against the enemy's sphere of influence[2] a hirakizume or simply a tsume." My emphasis: sphere of influence being what I regard as a stable or moyo-related group.

Later on it says a characteristic of a good tsume is that it combines two things: attack and defence; kills two birds with one stone and its value is heightened according to the weak points it exposes. Conversely, the injunction not to approach thickness still applies.

For those that have the book, Diag 12 on page 39 is interesting in that Black 1 is described as a "kind of tsume", although it's actually a bad move. 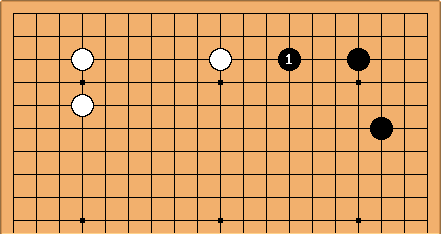 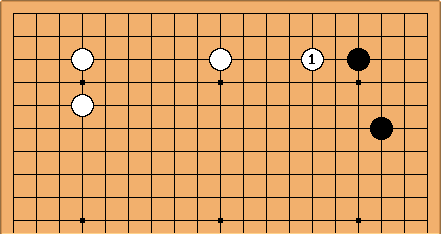 is not a checking extension.

Andrew Grant: I don't understand why this isn't a checking extension either. Explanation, please! 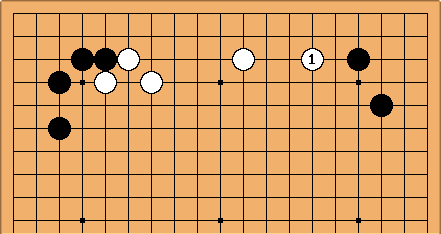 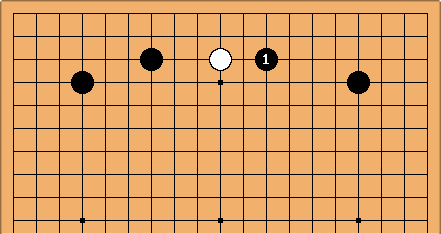 is not a checking extension. It is a pincer. 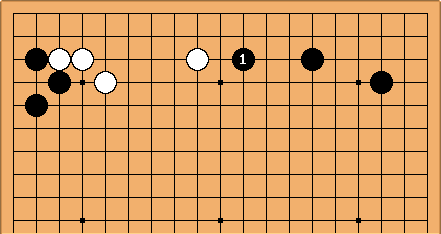 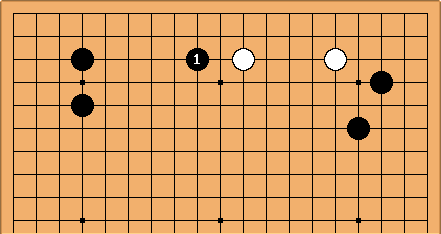 is not a checking extension. 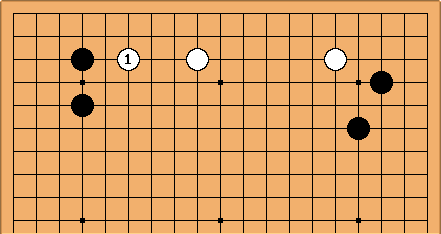 HelcioAlexandre I recently read Takagawa's article and I understood from the examples that a checking extension has a great effect on the board. It has dual purpose: at the same time that it makes your position secure, it will make your opponent's position unsecure. This is what I felt from them. In the examples that are given as not being a checking extension, you can see that they either don't make your position secure or threaten your opponent's position. Also, it's usually a key point for both sides. In Example 2, if white plays on the same point as black in Example 1, it is a checking extension. I still haven't been able to use this concept in my games since it is very new to me.

[1] Bill: I would not call a single stone or a weak two stone group stable, either. However, Takagawa calls

[2] Bill: In light of the usage in footnote 1, I think sphere of influence is typical rather than definitive.

John F. I think that's right. It's tempting to assume that the Japanese use their words precisely or consistently, but they rarely do. Also, they tend to impose a hierarchy. As in one example above, a pincer will usually override a tsume. This hierarchical principle applies to many other terms, and can be effectively applied in computer programming.

My suggestion is that if the enemy group already has a weak point (nerai) within it, before the (apparent) tsume, the move played against it is not a tsume. Therefore, in the extra example added by Bill above, the single white stone is not weak so can be tsume-ed. To repeat, I believe there is always a connotation of the tsume playing up against some sort of strength. After all, that is what is behind the native meaning - putting the lid on, stuffing into an enclosed space, cramming in. There has to be a bit of bounce/give/resistance in the thing you are cramming in, otherwise it just ain't cramming.

Charles Hmmm - some searching on the examples makes them look a bit suspect, except for Example 1 which is unexceptionable (for instance Example 4 has occurred in many pro games, without anyone playing the 'checking extension' urgently). What are we left with, here?

It seems that tsume corresponds to a play that

rather than being an actual attacking play such as a pincer. I'd tend to use 'cramping move' for some but not all of these plays

John F. I can't agree - maybe that's because I can't really see your own difficulty with the term. To be true to the Japanese term you need to acknowledge that tsume is an abbreviation of hirakizume and therefore you need "extension" in there somewhere. I think the idea of a target is just a spin-off - it's not inherent in the definition.

Charles Wasn't it more that you rubbished the initial checking extension page discussion, John? I'm happy enough with the wedge-type examples, but I don't feel confident I could teach anyone else to tell a tsume, yet.

John F. I begin to see what you mean (though the wedge bit still leaves me groping). On the other page I was (I think) supporting Bill and ultimately objecting to the phrase "extension with added value" because there is nothing in there about tsume (added value is too nebulous), and also because it makes extension too prominent. I think it would be useful to use the full phrase hirakizume rather than tsume simply because it keeps the hiraki portion in. Checking extension is, in my view, rather a good rendering (John Bauer's?). But if you want to nitpick you could say that it should be the other way round: tsume is the head noun and hiraki modifies it. Not suggesting this as a phrase to use, but "outreaching containment" may convey the idea.

fanfan I suggest "opposition" as in chess (assuming there is no idea of extension when one uses only "tsume", even if in most case it is a "tsume-biraki"). "Opposition" corresponds to the diagram below.