LovedInEmerald The trouble stems from a lot of players I meet being quite fond of the pincer and as I like to play at a more sedate pace than many other players around my level the game often gets pushed in directions I'm not too keen on. Anyway, here's one of the lines that's been giving me trouble. 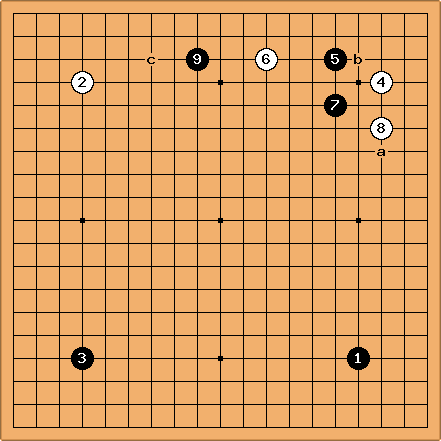 I'm not sure about how good my play is in this variation (White) but I have problems fighting before I've established some sort of base. This kind of play (in my experience) tends to lead to a very complicated fight with the fact that Black can always run away and White has to keep pace to avoid being surrouded. Is there a way of working this type of start from black to make the game less of a capturing race as a) I always lose them and b) I don't like games where there is one big group being attacked from two sides which will win the game if it lives and lose the game if it dies. I haven't seen this type of opening in professional games so I'm hoping there's a way to neutralise Black's aggression somehow? Thanks in advance for any help!

Charles It's a running fight. Not easy to summarise how to play these. Don't get shut in, anyway. Move out as rapidly as is safe (

should be at a, by the way). White could also take the decision to sacrifice

by playing at b then c: a bearable loss since Black can't completely capture it with one more play.

LovedInEmerald Thanks for the link :). To try and make this less of a general question... are there any specific techniques that are useful in a running fight?

Also, what would be a strong continuation for White in this position if she decides to sacrifice

? Obviously White would need to make up somehow for Black's fairly large framework on the side. I have read the 'b then c' bit but this doesn't seem to make up for the fairly large and quite deep framework that Black is building?

Anything really you can think of would be quite handy as this type of play is very, very common at Yahoo and it's too life and death orientated for me to be able to deal with effectively (I also don't want to get in the habit of playing a weak group based game as it doesn't appeal to me in general as a strategy). 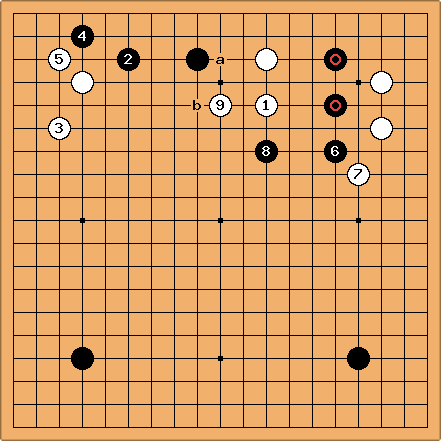 Charles Suppose we play the running fight forward a bit, just with normal plays. Then

settle one group, after which Black's problem is handling the

is characteristic: Black makes it harder for White to get clean out into the centre. Then

is a play aiming at the shape point a, while of course getting out and keeping the black groups separated. To play

at b looks a bit thin.

This is something like a fair result, with White taking territory in two corners, and both players having weakish groups. 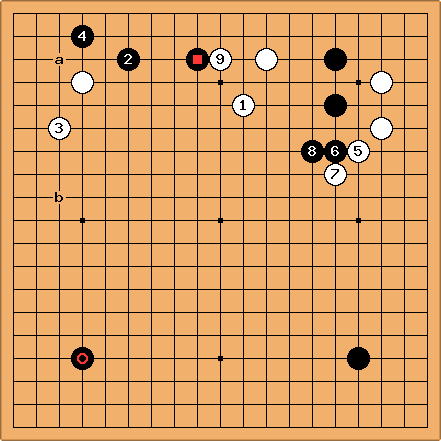 There are other variations that make sense. Here

jumps out with a knight's move, a technique for staying light. White plays tenuki in the upper left after

, figuring that if now Black at a, White at b, White is creeping towards the

White builds on the right side too. Then

will strengthen both players locally: since White considers Black strong in the upper left anyway, this is a logical direction of play. 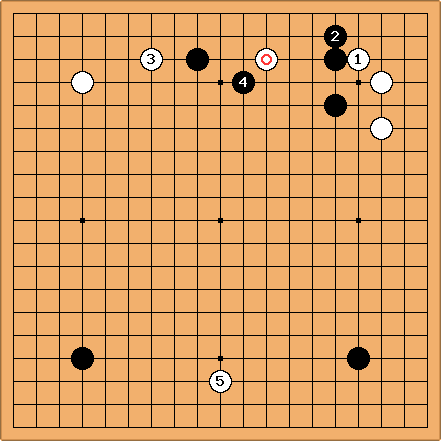 in the two previous diagrams is good, White also considers this way of playing. Some life is left in

the game slows down somewhat; and you can say Black hasn't yet made any solid territory.