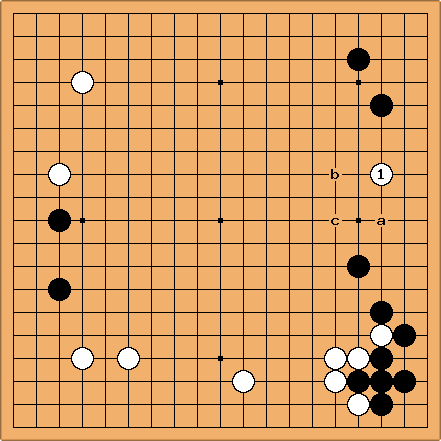 In diagram 22, p.80, of Lessons in the Fundamentals of Go, Kageyama criticises the invasion

of Black's right side framework without giving an explicit refutation or improvement.

Question 1 How should this invasion best be refuted? 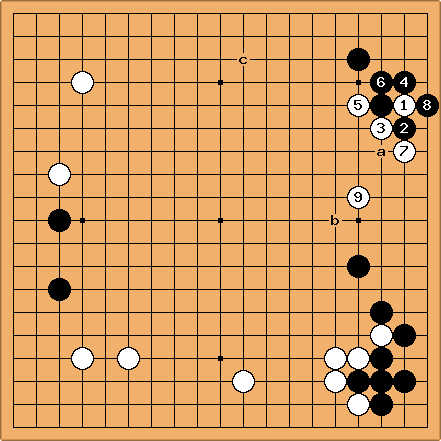 Later, in diagrams 25 and 26, p.83, in a similar but different position, he recommends an invasion that sacrifices three or four stones approximately as shown, followed by

Question 2 Does this invasion make sense in this position?

Question 3 How would you invade the right side framework in the initial position? Or would you simply play

at c or some such point?

Dieter: I would definitely play around c. I think that Black left of c would also be the refutation of invading the right side. The second diagram certainly is lighter than the first, but still the wrong direction I think.

Andrew Grant: My answer to Question 1: I also like the point left of c as a refutation of the invasion, but I'd like to play the 10-3 point on the right side first to deny White a base.

In answer to Question 2, Kageyama's point is that given the whole board position, any invasion is premature and thus wrong. Later he gives a different position, in which the invasion in your second diagram can be played; but as Kageyama says elsewhere, 'Play the same move with no regard to the surrounding conditions, and... at times you will receive praise, at times scorn.' In this respect your second diagram is misleading.

This is Kageyama's actual diagram[1]; I think it's stretching credibility to call it 'similar' to the first one. The position in the bottom right is totally different, for a start. And the top right shimari faces the other way. And this isn't a full board diagram either.

The answer to Question 3 follows from this: As White, don't play the invasion at all. c or the point to the left are both better by far.

Dieter: Thanks Andrew. I agree that the half board position is so much different that the moves make sense now. Still, I disagree about your Answer 1. If you play 10-3 White gets a second chance to play the proper direction. There is always a chance she realizes in time. Your punishment for her tenuki on the right side cannot be big enough for allowing her to patch up her earlier mistake.

Andrew Grant: Well, I understand what you're saying Dieter, but 10-3 on the right feels like an urgent point to me; it doesn't matter if you can't punish the weak group straight away. Whereas an extension at the top is merely a big point.

To get back to the original topic - An important point of difference between Kageyama's diagram and Grauniad's second diagram is that Kageyama's diagram is not a full board diagram. Therefore it is not possible to make a whole-board judgement of this position. Kageyama's text asks for the best way to invade. In part-board problems it is not legitimate to reply to the question "White to invade" with "Depending on the whole board position, it might not be right to invade at all." The assumption is that an invasion is correct, the only question is where. You can't equate this with a full-board position in which a full-board analysis can be carried out.

Bill: I want to second Andrew's last paragraph, and agree that White's play is on the top side instead of invading. Any invasion is premature.

As for Black's response, I agree with Dieter that Black should ignore the invasion for now. Black is so strong in the bottom right that I cannot agree that the 10-3 (a) is urgent. As White my next thought on the right side is to jump out at b rather than approach a strong group. As Black, then, my aim is the boshi at b, and if White follows at a, a further boshi at c. To prepare for that attack I want to extend on the top side.

Charles Matthews But see probe popular misconceptions; I seem to be on a mission to track down those responsible for telling us this is a middlegame joseki.

Added later: It's an odd example, by the way. The only examples I find are both from 1844. And this area of the board was treated as non-urgent by Honinbo Shuwa.

Grauniad: Thanks everyone for this excellent discussion!