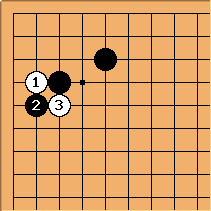 is a mainstream reply to White's probe

in Black's enclosure. White cuts at

, an interesting play based on ideas of light shape.

This sequence occurs for example in Strategic Concepts of Go. It is something like a textbook example of a certain kind of play (formation of what you could call 'screening kikashi'). It does seem to have led over time to at least its fair share of misconceptions. Some of these are to do with inappropriate thinking (equating middlegame joseki with joseki in the sense of adequate set patterns).

Firstly, how does Black respond? 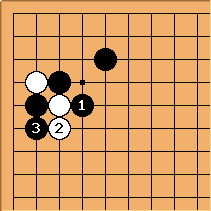 This seems to be the common continuation in contemporary pro go. This is stern resistance from Black.

are severe plays, Naturally enough they give White scope for action in the corner, though. 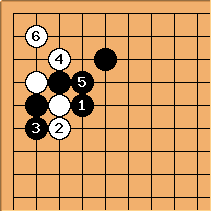 Chris Hayashida: This depends on a ladder, right? If the ladder going southeast favors white, does this continuation seem reasonable for White? It looks like ko for life in the corner, and two groups of black stones in trouble. 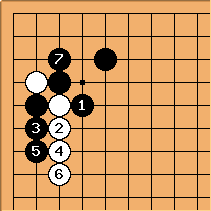 Chris Hayashida: I'm not strong enough to tell, but it seems like White got the short end of the stick here. I saw this sequence when White already had a group of stones further down the board. Otherwise, the group seems heavy to me.

unkx80: Apparently this is a common side pattern. 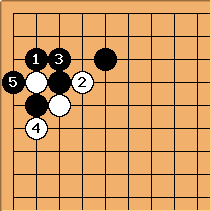 here is clearly mostly concerned with corner safety. It means White has kikashi to play at

: for Black to play

, forcing Black to connect (it's a picnic ko for White).

The attraction of this sequence for teaching purposes is the handling next of White's position. One does wonder though if the message given, that Black can play submissively like this, isn't misleading. 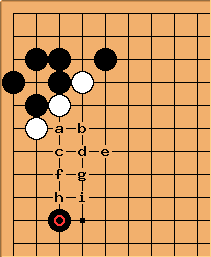 Then there is the question of White's continuation to make light shape.

White a and b are heavy, and that's the initial lesson. Anyone who simply looks for such plays, and no further, can almost certainly improve by considering what is wrong with emphasising connection here.

If the marked black stone is there, for example, White b will be answered immediately by Black c, a perfect attacking peep.

Therefore some other choice must be found, out of c to i. Here the point e is included out of respect for 'Strategic Concepts', which uses it as an exemplar of light shape. In pro games, however, this isn't such a common sequence in the presence of the marked stone. A Takagawa-Sakata game had White continuing at i.

Granted that this is a good example of something, it does seem that it is high time that it was reconsidered, in the database search era.

eretan?: Can anyone give the normal (popular) continuation, if there is one? If not can anyone who knows any continuation of this position show me how this is to be played? I've seen this shape a few times in teaching games and lectures, but forgot the continuation that was showed... This sabaki shape seems common, and I would like to learn more about it. 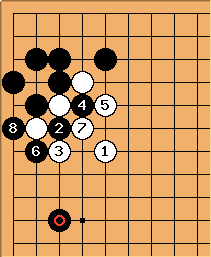 A possible continuation if white plays lightly at e in the previous diagram: If black tries to get an attack by cutting, white persists in playing lightly. He is prepared to sacrifice his kikashis.

But it may be argued that in this result, the location of white 1 is still a bit heavy. So perhaps white should be looking for even lighter and more flexible moves like i in the previous diagram.