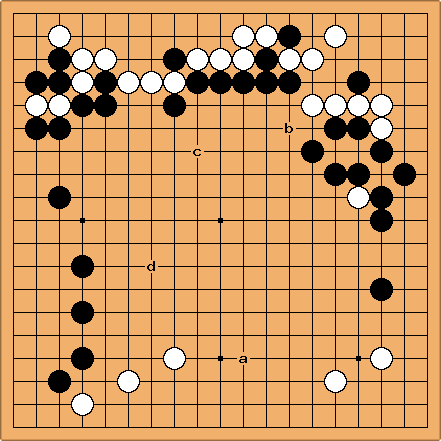 Mark Wirdnam This seems like the position where the knowledge (which I don't have) from reading Attack and Defense - the book would come in very handy. I'm happy to have sente, and to be able to do something against the black thickness which has been growing steadily. I also believe I've been able to equalize the handicap already (other judgements on this issue?).

In the game I immediately dismissed a or thereabouts as being too modest.
I spent a while considering b, thinking that it tries to counter the completion of a big black framework.
In the end I decided it wouldn't do the job well enough. So I started to look for a good move smack in the middle of the board. This I find very difficult. Except for tengen, which has a big dot on it, I don't know where to start looking, because I don't know which sequences leading into the middle of the board could possibly occur in a big space like this.
I ended up playing c, which acts towards some possible cutting of the black position. Buts it's definitely too close to the black thickness. I think it was a mistake, but still don't know what a better move would have been.
Would something like d have been best, maybe?
It would be great to see a discussion on this, thanks! -Mark

Charles First, I think Black is ahead on thickness, to the extent that White has problems. 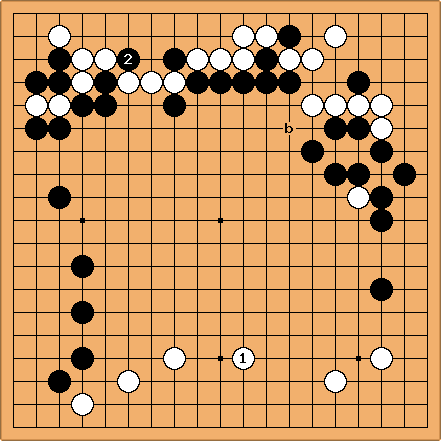 is played - reasonable looking at the overall position in broad terms. Then I think

In fact I believe in the initial position White's play at b is more like the right idea: try to make Black's upper wall a weak group. But the tactics around 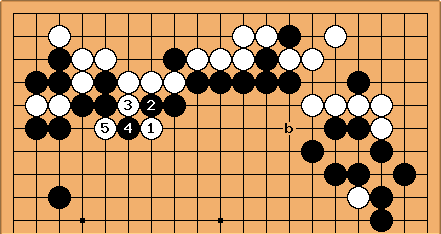 This potential double atari may be the most significant tactic around the board. It combines with the White b chance. 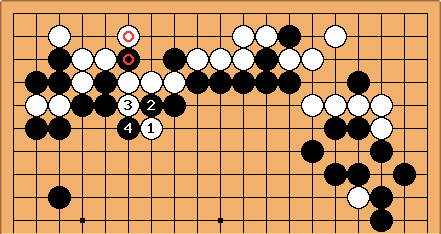 Obviously if Black can get in the 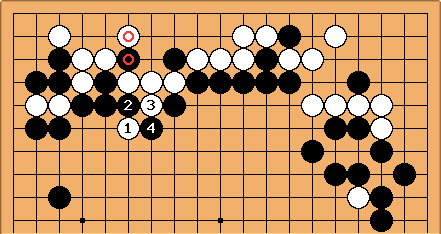 Thank you, Charles. It seemed to me during the game - and now that I've read your sequences I still think so - that White can't move into the center from the top left. That was why I was looking for a move coming from the whitish bottom (expanding my framework while reducing Black's).

Charles Actually I thought the point is that White must, immediately. 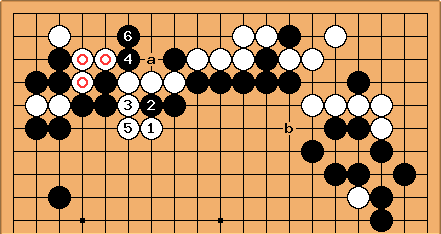 Mark: Here's what I could come up with. Jumping out gives Black a large corner, but come to think of it, why not? Next instead of connecting with a maybe straight to "plan b"?

Charles Next at a isn't quite right. Reading exercise: how to make the best use of the

Mark: "update: in this paragraph I missed the atari, so the sequence shown doesn't make any sense..." I dont' know what you mean. I can see 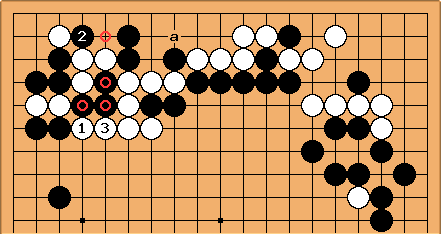 and also that after playing a from below Black can't connect, or the white stones suddenly come back to life. But that ends up being the same thing.
Now: if Black really gets the corner, then I need to decide whether it's worthwhile to crawl out anyway or not. It looks interesting actually. But if it isn't, then I'm back to thinking about a play from the bottom.
I wonder what I'm missing!

Charles That's rather clearly worse than White starting at the circled point, from the point of view of a squeeze on the 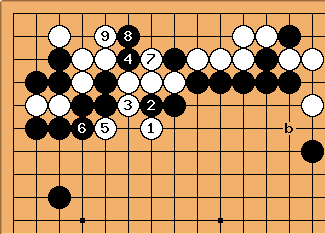 DaveSigaty: It seems to me that if

, White can play atari with 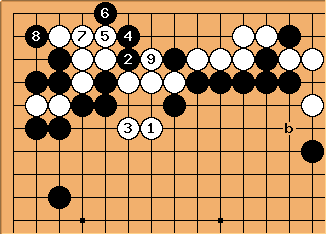 Dave: So the immediate cut at

here may be better. White plays

to keep sente after

. After Black captures the corner in gote, who stands better?

Mark: Yes, I think you got the order right, cut at

immediately.
But until now no one has decided whether this exchange is any good :-)!
I like the positive attitude it displays (have the big corner, you won't be getting much more from now on...), and it inspires ideas for continuations. The main problem I had with the alternative was precisely the absence of continuation ideas.

Charles Dave's intervention seems to have undermined my idea of using this as a source of reading material, more in the way of Tesuji the book than Attack and Defense - the book, I'd say. But are we done here yet? 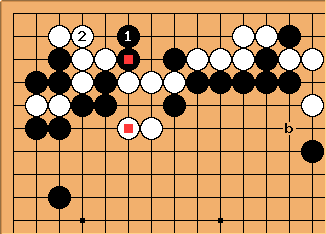 here, both in the previous context, and now assuming the

JoelR: Interesting... I wonder if the sacrifice of 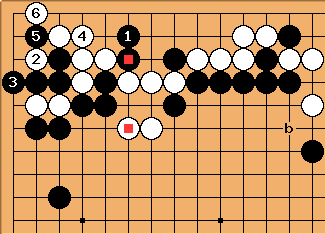