This is the strangest fuseki I've ever seen (I was White). I wasn't quite sure how to play against it. I won the game by about 15 points (with komi), so I'm not exactly sure what my question is... but... what would you do? How do you play against this? Is it at all reasonable as an opening (my opponent said he saw a 2d* on IGS play it)?

The only other thing I've seen like it is the "Great Wall" fuseki (this one might be thought of as the "big cross"). I've played against that, too, and won that game as well, but both games were... disturbing. I didn't feel comfortable playing, because the nature of the game was totally different. 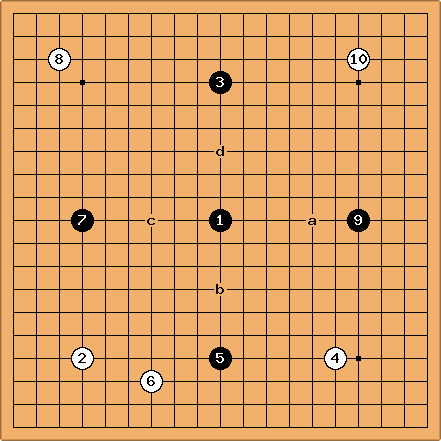 I've used this type of fuseki as Black to very good effect before. The purpose of the five black stones is to maintain boardwide communication in a series of very bloody fights. Best way to combat this is to disrupt that communication - labelled caps are a good way to begin this. -lavalyn

Alex Weldon: I just played safely, made sure everything lived. He still managed to start a few bloody fights, but I just continued with the strategy that starting with all four corners gave me a huge territorial advantage, and just concentrated on not letting him kill anything. Sure enough, my groups were a little bit cramped, I had a bunch of small territories and no big one, but he ended up with pretty much no territory at all, just lots of dragons spanning the board.

lavalyn: Perhaps your choice of corner plays has something to do with it. The Big Cross has serious problems fighting against 5-3 and 5-4 openings, as the Cross stones are more for influence than territory. Even though 5-3 and 5-4 technically don't claim the corner, they exert great influence on the "easier to make" territory regions.

What Big Cross really hopes White will do is open on the san-san or hoshi stones. The stones are ideally placed to support the shoulder hit or 3-3 invasion.

Alex Weldon: That was sort of the thinking behind White 4; that I should try to counteract Black's influence-oriented strategy. But then I got scared because with Black having all four sides, if I let Black invade every corner, I'd have nowhere to make territory, leading to 3-3 and 3-4 point plays with 8 and 10. My thinking was that with White 4 and 6, I was better than Black for fighting on the bottom side, and the 3-3 and 3-4 point on the top could essentially fend for themselves, so I'd leave them alone for the time being and give Black the fight he wanted on the bottom, but on my terms.

lavalyn: One could argue that the Cross should never be allowed to complete - so even White 8 might be better positioned at 9.

I say all that above with the qualifier that I'm an 8k player that enjoyed using this opening, so I have an accurate sense of what I'm afraid of when playing it...

Alex Weldon: Yes, it seems bad for Black if White plays 8 at 9, except that then Black can play in the top left, getting a kind of loose framework encompassing the top left quadrant. However, it's said that White shouldn't let Black complete the Great Wall fuseki either, so I suppose that White 8 at 9 is, in fact, correct.