This is from a recent game in which white chose not to complete the joseki in the lower left corner but played a corner approach instead: 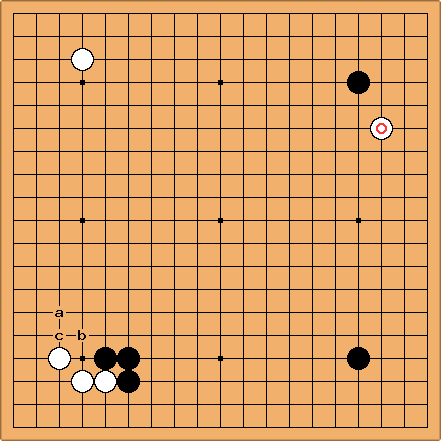 Is this a viable option for white or is playing at either a or b too urgent for white to be omitted?

is a mistake, it should be at a or b as you say. If I had black in this position I would play c right now.

The game continued as follows: 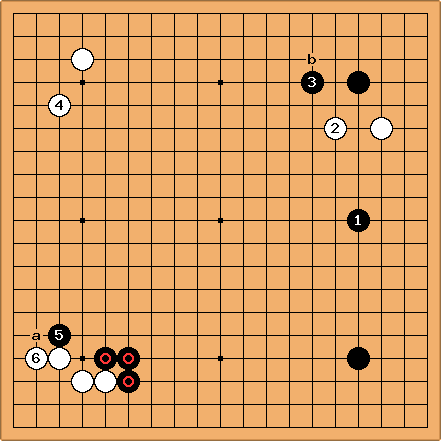 LukeNine45: I played something quite similar in a game a while back. I think it's way better for black (everyone who saw the game agreed), and in fact in a joseki book, I saw

at a (which is definitely better than this), with white crawling on the second line: it was still listed as quite inferior to the normal moves.

Bill: A search on GoBase indicates that the tenuki, allowing

, has become much more popular in recent years, especially when White has a play that reduces the influence of the

stones. (That's not the case here, so maybe the tenuki is not so good.)

Now my questions are: Was

the proper way to play for black or would an immediate play at 5 (or at 3) have been better? I consider

to be a rather weak move (allowing both

looks non-sensical to me) - is that correct?

looks wrong. If white is going to play this way,

at b or at 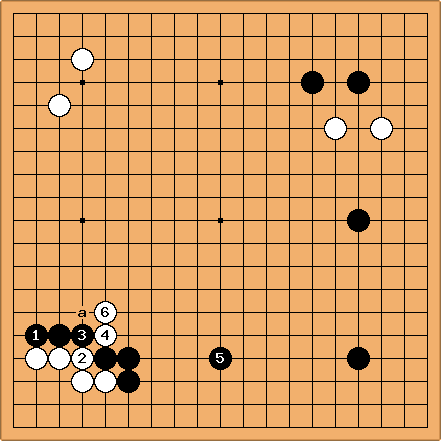 , even though the ladder doesn't work-- that way black gets to play a move on both sides, and white is worse off, I think. Because of that possibility, I think it's too early to cut. There may be a black move instead of

to seal in and leave no cutting points, but I don't see it. Maybe

My thinking was that even though white managed to separate the black stones, white is confined to the corner while black develops at both sides and should have a better game (considering the large framework and the weak white groups). Was that the proper way to look at the position or should black have prevented the cut at

In the game it was an easy win for me (as black) but I am not too sure that I have a proper understanding of this position, so I would welcome any comments.

LukeNine45: Even with the cut, I think black is still ahead. (all my comments only have a 2k warranty...)

in the last diagram seems like a mistake to me. Bad shape and a cutting point just to block an open skirt on a side of the board that's already small? What's wrong with this? Gote, sure, but Black has control over the centre of the board now. 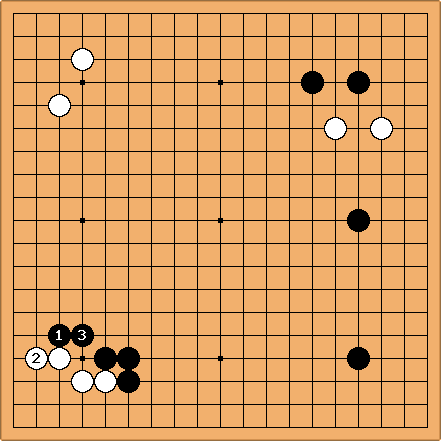 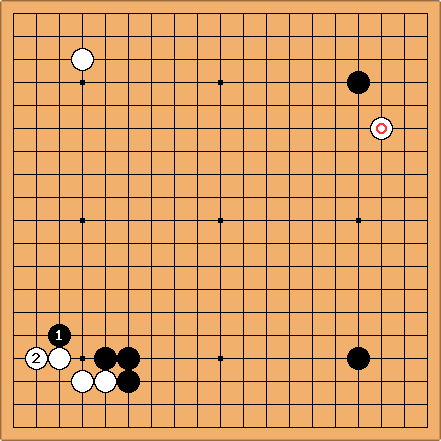 iff: I am convinced you can do better than that (not being sure is easy - even I can do that...). At least you could give some variations to illustrate why you are not sure about the next move... 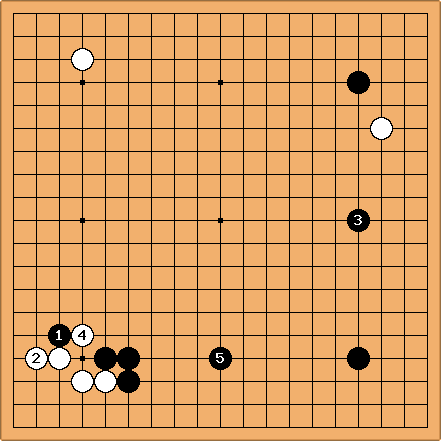 Bill: OK, here are a couple of variations.

and then Black plays

form a joseki shape, after which if Black plays

, White will surely not play

. So Black has a clear advantage, but is it enough?

Dieter: There is aji in the left bottom corner, while the exchange is 2-1. In return Black has simple, big points

. That seems enough to me. 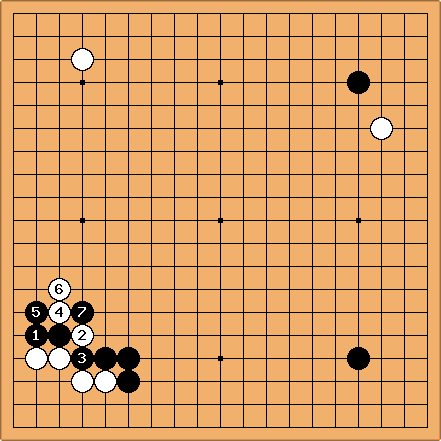 does not work because of a ladder or two. Similarly, White cannot play

and then cut. However, 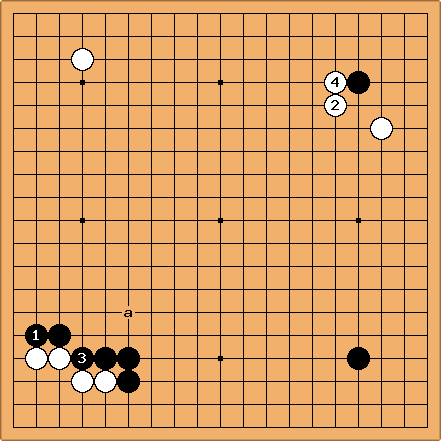 is a ladder breaker. Now if

, Black seems to be better off, but by how much? Is it enough? What's best?

Anonymous:Isn't the ladder breaker made irrelevant by the net at a? 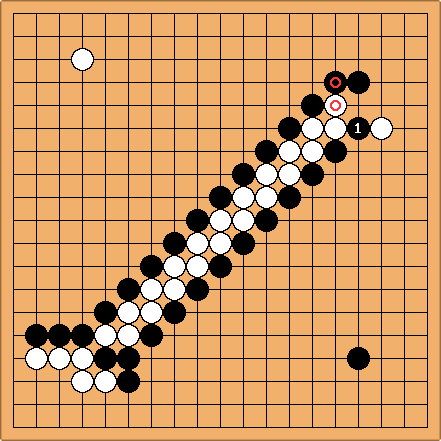 Bill: Upon reflection, it seems that

is a good response to

. That makes the osae look better.

(BTW, this diagram shows the problem with illustrating why you don't know something. You may reveal how much you don't know. ;-)) 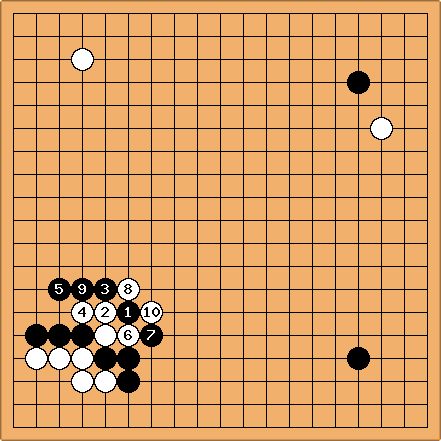 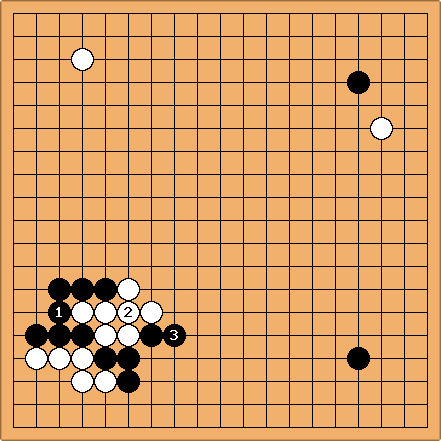 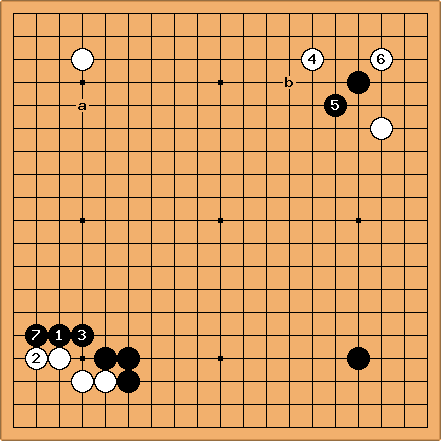 is solid, but allows

. Black looks better, but White's corner is not completely surrounded. If now

, Black will wish that

were on the star point.

looks slow. A and B are faster 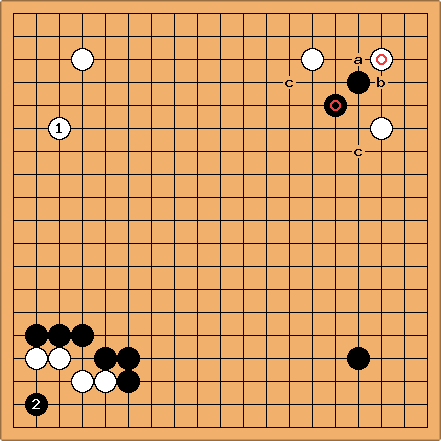 iff: First of all thank you very much Bill (and all the others) that you've added some of your thoughts. For me all this BQM-discussions (regardless of wether or not a final conclusion can be found) are extremely helpful.

I have one more question regarding the positon in the upper right corner: In my games usually both black and white rush to play on either a or b. The thinking seems to be that white cannot be permitted to have both a and b so whoever plays first can at least choose which point is better for him (or her). Is that the proper approach or is that too amateurish?

Bill: Over 30 years ago Maeda Nobuaki came up with a new way of looking at the exchange,

. Black's idea is to cede the corner to White without allowing White to contain Black with a play at

. Then Black plays elsewhere. Black can do that because the corner has become less urgent. Often Black threatens to play at a or b by playing on one side or other, and White plays there first. Sometimes Black will play on one of the c points instead (or both). Sometimes Black will sacrifice both stones. 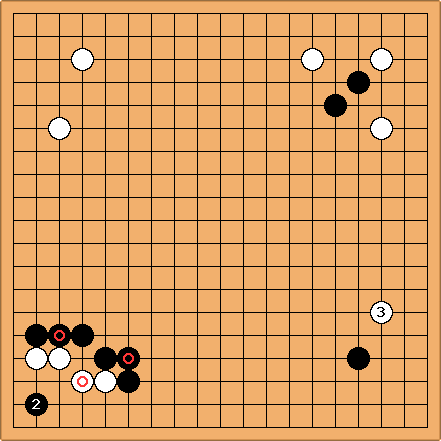 Dieter: no tsumego, but sacrifice was in my mind. Black has three stones more - imagine three black stones at the marked spot. Still I agree that all but one Black's stones are on the outside, whereas White has sacrificed four. So it cannot be good for white. 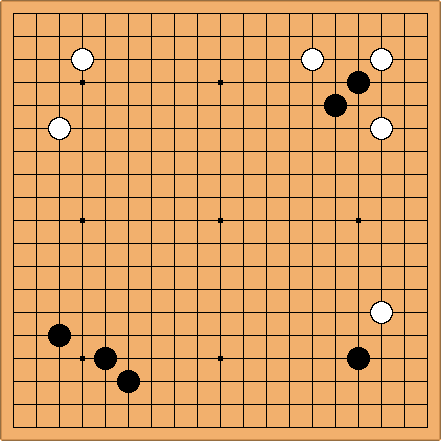 Bill: For comparison I think of this enclosure, which you sometimes see. In this diagram I think Black has fallen behind, but Black's wall in the comparison diagram is much stronger. 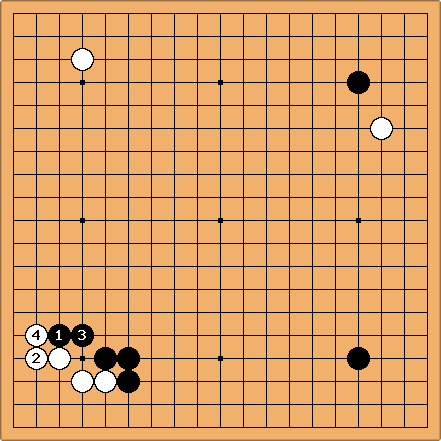 Bill: If White needs to respond with

being labeled thick. So it cannot be left unplayed I think, even if on the second line. Hence,

two diagrams back (at the same spot) is not slow either, as I first thought. 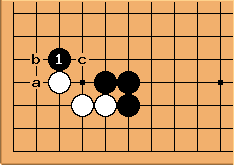 xela: Most of the discussion so far seems to assume that white will reply to

with a. Is that really the best move? My first instinct would be white b, and I'd also be wondering what happens after white c (it's probably a mistake, but worth reading out).

Bill: I assumed that play because that is what White played in the actual game. Wb is better. Wc is tricky. (Aren't these plays in Kogo's joseki dictionary?)

Dave: I think there is too much discussion above :-) 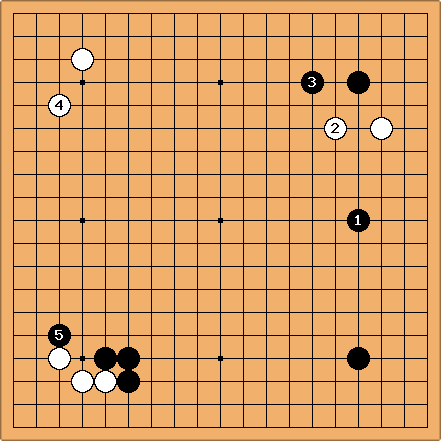 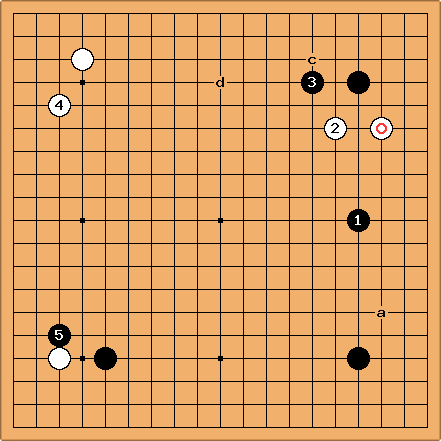 Dieter: But Dave, the

exchange is so bad that it cannot be taken for granted, or isn't it?

Dave: The original question is about White's options in the lower left and White chose

in the upper right as part of the game continuation, so I presented it that way. The issue can be limited to the lower left. Is White better off for attaching underneath in game or not? Too often we think in terms of "is that viable" or "can White get away with that" in the sense of not being destroyed. However, the real question is always simply "is it better". To answer my own question, it is inconceivable to me that White is better off for having attached and drawn back in the lower left before playing in the upper right. White strengthens Black on the lower side and leaves behind excellent aji for Black affecting the left side. The question of what is the "best" way to proceed in the lower left seems almost irrelevant. Fundamentally White has given Black the advantage.

BobWhoosta: Imo tenuki was a viable option, although better in Dieter's second diagram (to maintain flexibility). I believe that since black is building influence on the bottom left, white's approach to black's corner (

) might be better in the lower right (something like a in the diagram above). This limits the potential of any black framework in this area. Of course this leaves black to follow up in the lower right, then hopefully get sente to approach in the upper left. I guess you can't call a move like

bad per se, but

was definitely bad imo (what is white developing/hoping for??), although I'm not sure how I would respond at this point (probably changing directions with c aiming for a possible kobayashi style follow up at d). Tenuki after

exchange was definitely bad imo, as white is just playing so busy as to be flighty. What is his goal? As of this point the only strategy for white seems to be starting various and complicated fights throughout the board, as his stones look disjointed, and out of place. Black on the other hand seems to have every stone working appropriately, and together.