BruceWayne: if black is going to choose a side to block on for his next move, i believe that it is correct for black to block at 'a' rather than 'b', in order to build a wall facing his star point stones. my opponent (white) seemed to agree that a play at 'a' is common, but was very resolute in claiming that blocking at 'b' is a different way to play and is in fact playable. i couldn't and still don't understand his reasoning. do you any of you see merit in blocking at 'b' rather than 'a'? if so, please let me know. 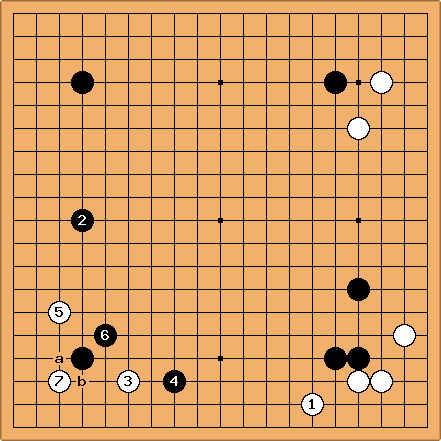 for me, "a" is better. Black becomes extremely overconcentrated on the lower side, whereas You have sente to play something at the top.

ChrisBall: There is also a tesuji in the position after "a", which might lead to B being able to swallow the stone that is cut by "a" as part of the chase.. 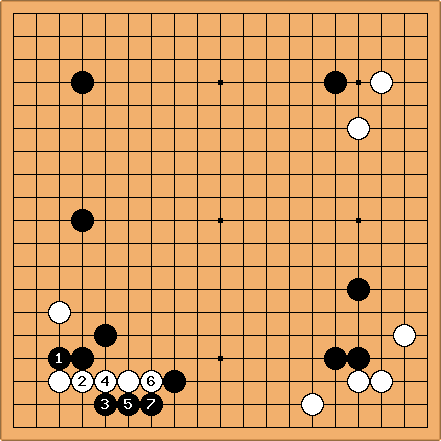 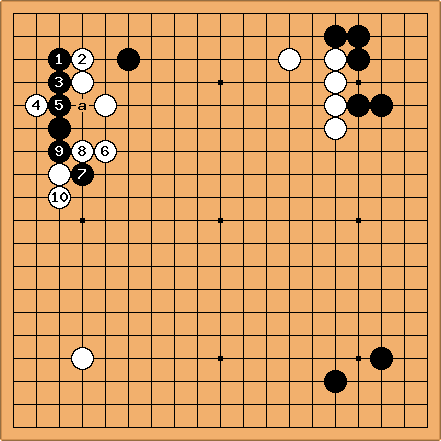 Dave: The only game that I find with the immediate play at 4. Note that White here does not pull out

immediately. Why not? The basic idea is for White to seal Black into the corner. So White reverts to

. So why bother to play

at all? This is presumably to discourage Black from playing at a, a "normal" play in this situation. It does not work though... 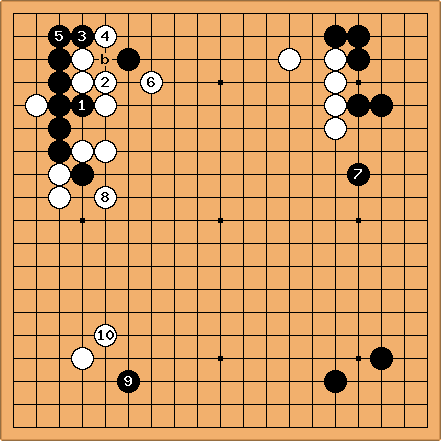 Dave: Black goes ahead and plays

anyway. White is unwilling to make bad shape by connecting at b and so plays

Bill: I find it hard to imagine that an amateur dan player would block on the short side here. But it does not seem so easy to explain why to someone who does not get it. Let me take a stab at it with a simple comparison. 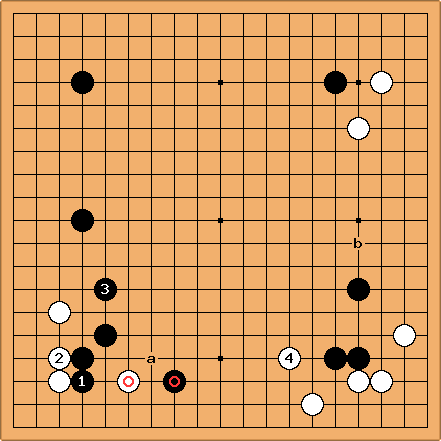 Bill: I suppose that

is attractive because it nearly captures

. If you are overly in love with territory and captures that makes sense. But the flip side of that is that, because

is so close, it is easy to sacrifice

Bill: With this sort of thing you can get lost in variations. Let's look at some simple continuations to get an overall picture.

is simple and reasonable. Ditto for

Bill: How does Black stand after this exchange? White has a secure group in the bottom left corner, and Black has some outside influence and probably a little territory around

may still run later, perhaps at a.)

reduces Black's influence while at the same time threatening Black's group on the right. (Wb is a good attack.)

may still slip away. (And if Black played

at, say, a to nail it down, he would be overconcentrated and get much less influence. 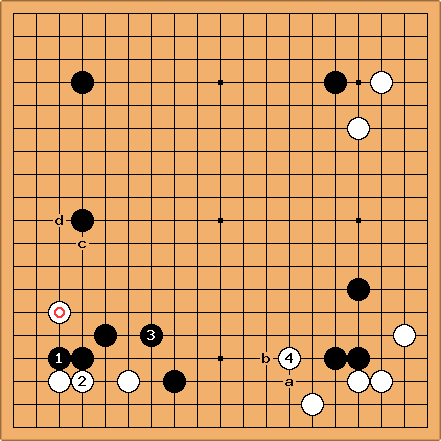 Bill: White's group has gotten much less in the corner, because it is hemmed in. As against that, Black's gain is more nebulous, all influence.

is far from dead, and is easily strengthened, for instance with Wc.

Bill: Another thing Takagawa said was to attack on a large scale. Territory solidifies in the ensuing fight. A small scale attack is easier to ignore. Black is attacking

on a large scale. The iron pillar at d is quite good now, not only attacking

but also strengthening Black's framework on the top left side. In fact, White might prefer Wc to

is an example of miai strategy, looking at both making a large framework on the bottom side and center and attaking

on the left side.)

Bill: The gains from

may not be so obvious, since the payoff in territory is down the road. But at this stage of the game, obvious territory is often too small.

ChrisBall: Bill, am I missing something, or does your (3) also set B up to kill W (as long as B surrounds loosely rather than tightly) using the (3) in my diagram above? 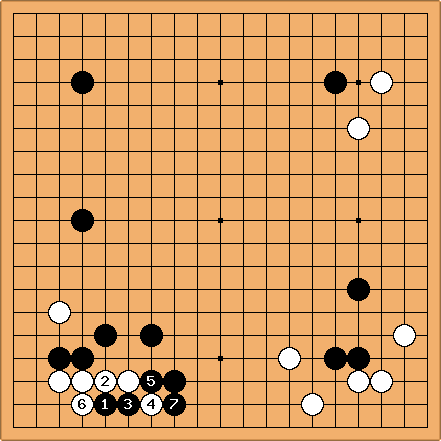 zinger: Is it even necessary to exchange

directly seems to work. Is this an example of the 1-2-3 principle?

. However, here the effect of

on the right side needs considering.

Velobici: In the diagram, White ends with sente. Should White play

Bill: The question before us is whether Black can kill White with this attack. To tenuki would be to give up. However, see the sagari diagram below. 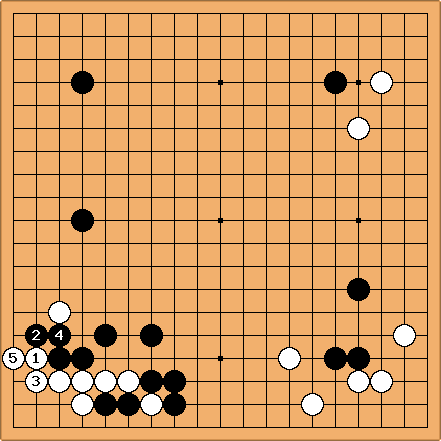 Bill: White can then make the L+1 group in the corner to live.

Bill: Not that this is best play. Black has different attacks, and White can run out instead of living and making Black thick. As I said, there are plenty of variations to get lost in. ;-)

ChrisBall: Ooh, I see. Thank you for the variation! 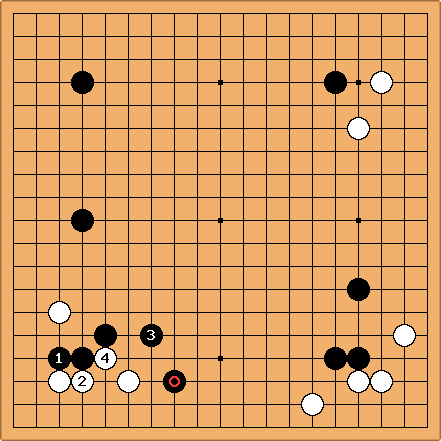 as shown immediately when the marked Black stone is present. Black struggles a bit to make sense of his shape here. 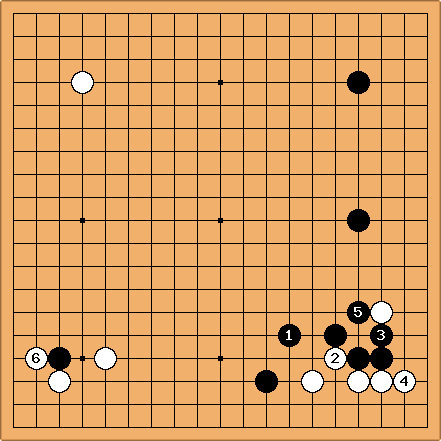 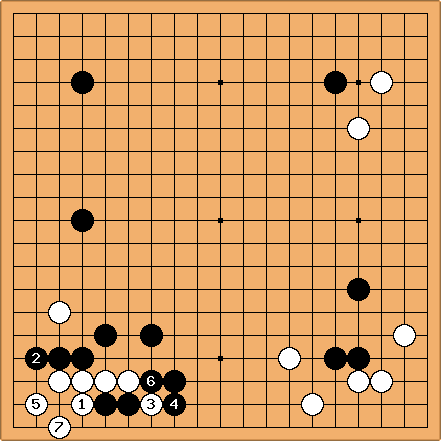 Bill: Velobici raises the question above of whether Black can tenuki if White plays

. In a real game that is certainly a possibility, but we want to know whether White can live.

does allow Black to switch the attack to the other side with the sagari,

blocks on the bottom side. White can still live with

zinger: Perhaps then white should play the hane and connection first, then decide about the bottom edge. 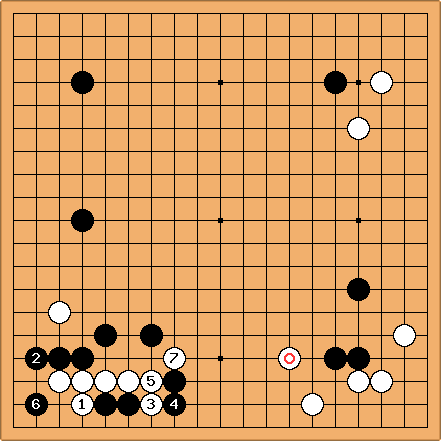 Dave: I think that White naturally connects at

. Particularly with the marked stone on the right White is not going to fear the fight. Black can not afford to play 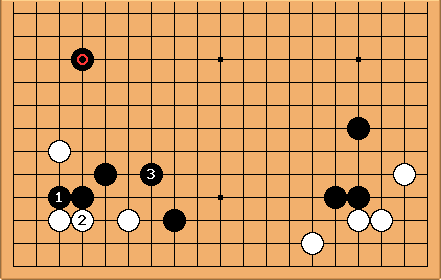 Dieter: I have fallen in love with the terminology Minue uses, so I am going to analyze the position from that perspective. During a game you want to keep your existing stones safe (stability), while creating a lot of room for bringing future stones safe (development). Here, White has a stable group, but her development is held in check. Black is connected and open to the outside, creating a big scope for development, while the marked stone completes the base the black wall needs for future eyespace. 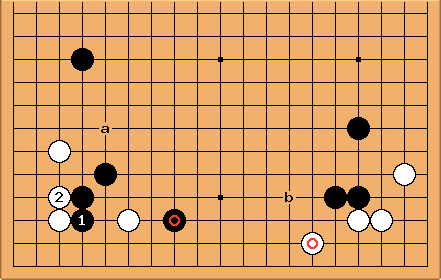 Dieter: Here White is also stable, but she keeps more scope for development. Black's group may be more stable here, because the marked extension is closer, but his scope for development is reduced by the presence of the marked white stone, which is part of a stable group. In order to build a big central sphere of development, Black needs both A and B. White will treat these moves as miai (equivalent) and play the one Black omits.