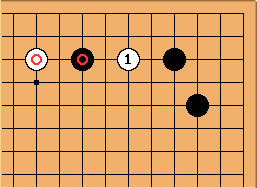 This is a practical application of Invasion Of Third Line Three Space Extension. Black has a corner enclosure. The stone

may have been played as a wedge on the upper side, then the tsume of

has been played as an extension of the enclosure, to which White likely responded by making a base for

on the left (not shown). Next, White can invade at 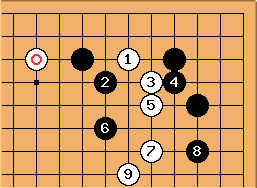 Of all the variations to the invasion, the attack by

can be considered standard, since this is Black's sphere of influence. Up to

can be expected. Black turns his original enclosure into actual territory while White leads in the running fight between the invading group and the dislodged extension.

may need some explanation. 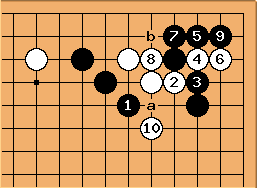 here, there is funny business in the corner. White creates that aji so that

cannot be cut at a. Incidentally, Attack and Defense notes that it is better for white to force with

here so there are no ladder issues for white and to prevent black from linking up at b.

can also be at b: 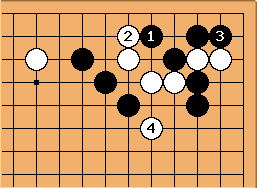 fixes the shape, leading to a similar result. 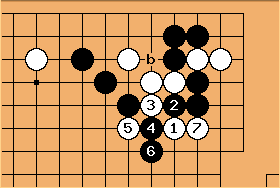 is important, because now the Black ladder starting at b fails. 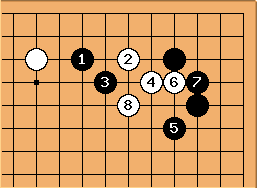 If the result of the standard pattern is not to Black's liking then Black can choose this variation, as suggested by Attack and Defense. 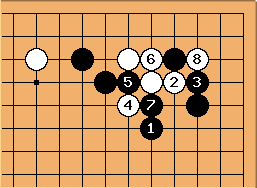 is a futile attack, since White easily lives in the corner.

It must be clear that the above standard patterns and variations are greatly affected by the whole board position. 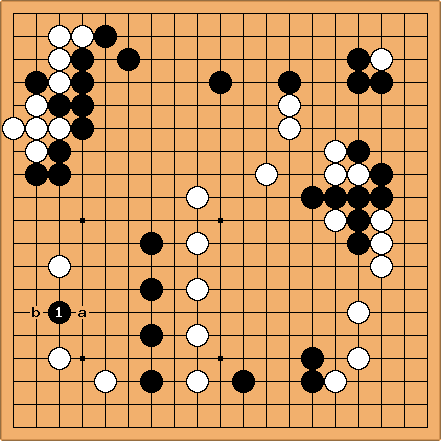 Here, Black has a lot of power to run towards. Connection should be White's priority, to which a can be used, resulting in a ponnuki that overlaps with Black's influence (See the invasion) or b to likewise connect but now with the intent to harass the black group in the middle. All depends on White's strategy here but given the Black thickness at the top, fighting is perhaps not called for globally.