These questions arose when considering how I might use my go program and attempting to recreate a little of that program's search capability using GoBase against a position in one of last night's games. 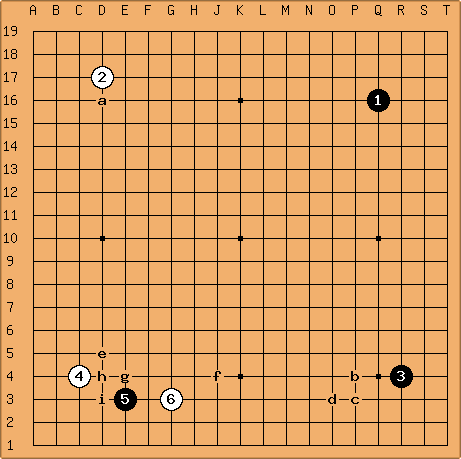 This position does not appear to exist among all the 35,000 games stored in GoBase. Does that indicate that the position is so fundamentally flawed that professionals simply will not play this way? Moving

to a does not change the search result...no hits.

Returning to the original position, white komoku in the upper left (

to hoshi, and removing

, GoBase contains only 64 games for these four stones. 47 of those 64 game have black's fifth move at either

Backing up one more move, removing

What can we conclude from these results?

Harleqin: I would not try to draw conclusions about the game from statistics. The truth lies on the board, not in the past. For a study on the position on the lower side, see Opposing Komoku.

Velobici: The program appears to be based on the idea that the frequency with which professionals choose specific moves in any given situation is a strong indicator of the value of the specific moves. As a gross measure, this is probably incontestable...the number of games where either player's first move is on the first line is zero.

While truth lies on the board (this is certainly incontestable for any of the games of no chance), opening theory, joseki, and tesuji are the accumulated wisdom of innumerable games played over centuries. The past contains our best current understanding approximation of the truth (the true situation on the board).

So the question remains can we learn from the frequencies of specific moves in professional quality games? I expect that the answer is yes, regardless of how much I like the idea or its implications for how computer go might be able to improve.

Bill: The relative frequency of professional moves in a given position has very little meaning concerning the relative values of the plays. Why? Because of the very strong selection effect. The fact that a professional chose a move is a far greater indication of its value than the fact that a different move was chosen more often. Pros do make mistakes, but they also follow fashions and trends. Very few top players started on the 4-4 point until modern times, for instance.

If pros do not choose a move, that's a strike against it. But if more pros choose one move over another, that does not mean so much.

Velobici: If I understand you correctly, you are stating that:

Its that last statement that presents some difficulty. While I agree wholeheartedly with you that the difference is far greater, that does not mean that there is not significant information in the frequencies of the choices.

Idea: That the whole board situation is of primary importance in choosing a joseki. (See Yang Yilun's Fundamental Principles of Go for an example of four perfectly executed joseki, even local result, that are each selected to demonstrate a great difference in whole board result.)

Given that idea, seeing which approach moves professionals choose, thereby limiting the possible joseki, is a strong indication of their understanding where value lies in the whole board position. By looking at the frequencies (absence is 0%), we can try to determine their estimation of the board. (possible conclusion: dont play symmetrically in kenka komoku. Indeed, mirror go might be an extreme version of this idea...Oh! You think that is the best move? I'll play it too ;)

Bob McGuigan: I think it might be correct to say that a move that appears frequently in professional games is a good one, but I doubt that much can be inferred from the absence or very low frequency occurrence of a move. For example, 25 years ago a database would not have included many Korean professional games, and much of the modern Korean research would not be available, so their innovative moves would not appear in the database.

Bill: A great number of the modern ideas in the opening sprang from the mind of one man, Go Seigen. E. g., opening on the 4-4, mukai komoku by the same player, the keima response to to the keima approach to the 4-4, the large avalanche joseki. The list goes on. (Not necessarily that he was the first to play them, but he showed their value.) What did the game collections of the time say about those moves? 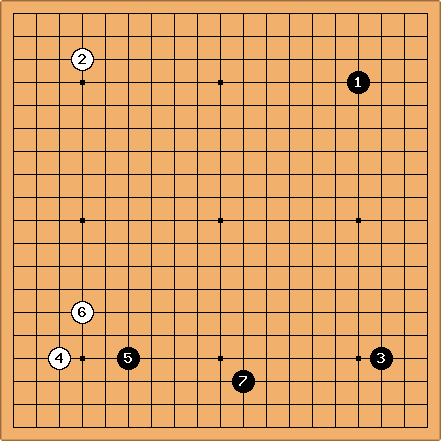 for opposing komoku. How many times does that appear in the database? Zero is my guess.

Anon: (Corrected): In this position

is the program's top pick. But there are no exact fuseki matches, half-board is the best.

Velobici: A database is a representation of accumulated wisdom, not a oracle to the future. As Harleqin says The truth lies on the board, not in the past.

For those of us that are not on Go Seigen's level, perhaps we can learn from the past.

Bill: I am not suggesting ignoring professional choices in particular positions. What I am saying is that does not do much good to strain at gnats. In most cases, all pro picks in a given situation have merit, though some are mistakes. In many cases there are other moves that also have merit.

IMX, most amateur go players suffer from not seeing enough possible moves. To try to determine the best play by polling the experts is dubious in the first place, and may narrow the vision and stifle the imagination.

Dave: Polling the experts via database searches alone is pointless because the continuations quickly expand to unique branches. At that point the polls reveal no further information. The student needs to be able to draw some understanding of the differences in the lines chosen in order to continue play. This can not be derived from the statistics alone. The statistics can be fun (in my opinion :-) and can raise interesting questions of the , "Why this instead of that?" variety. However, they can only raise the questions, they can not answer them.

There are already some questions in the above diagrams: