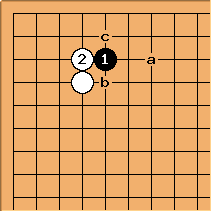 kado against the hoshi in quite a few games by 10-15K players on KGS, but nowhere else. It is typically played in the opening instead of a regular kakari.

My question is not so much how to respond, because

seems obvious (unless blocking on the other side produces a useful wall) but where did these players learn this? Is it legitimate in any way? The one pro game I found where this is used it was an obvious ladder breaker but that doesn't seem to be the case here. Calvin

Alex Weldon: It's bad for many reasons. It induces W to close the corner and make a large amount of territory there. Meanwhile, it leaves the B stone in a bad place. B's best option is probably to tenuki or jump backwards, to a or further, but either of those options make the

exchange look like an almost total loss. To be consistent, B would have to play something b or c but both of those are bad; b plays into hane at the head of two, inducing W to make further territory, while c is a case of playing on the second line when you shouldn't need to, and just asks for a turn at b.

Barring very special circumstances, I think it's safe to say that this play is pretty much never good. As for why double digit kyus play it... probably because it pretty much guarantees the response at

. Kyus seem to have an affinity for playing moves that force a predictable response, even if that response hurts them. Perhaps it's a case of "better the devil you know." ;-) 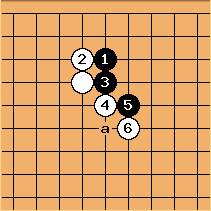 AdamMarquis: I agree with Alex insofar as the go is concerned: White gets a solid corner and black gets a stone too close to strength. I disagree with his reasoning about the kyu rationale here. Answering a bad move with a bad move often makes the original move look pretty good, and I think that happens pretty often. I've seen this kind of sequence go badly for White on KGS, and others like it, simply because White saw advantage and either plainly overplayed or tried something strange that didn't work. I don't think that it gets played because kyus fear change, I think it gets played because bad plays can go unpunished often in that strength range.

On to a slightly changed subject: even at 6k I often see the play at

on the side. I think this is, again, because it goes relatively unpunished. As often as not, I see

at a, which seems to me to be too passive and forgiving of Black's weakness here. 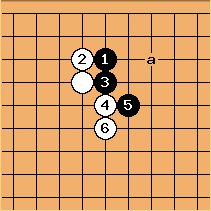 is not as active as a double hane, I would not shoot it down. Depending on the overall situation, it leaves quite a bit of aji at a, so I think it is playable too.

Alex Weldon: I'm going to stick to my guns... pretty much however W plays after

can be considered a trick play, even to a double-digit kyu. The extension at

isn't bad at all, though the double hane is more severe.

When it comes to kyu reasoning, I think I have a fair amount of insight because of the number of teaching games I give. When I ask why a player made a certain move, one of the most popular answers is "because he has to answer." Meanwhile, when I suggest a better move, they often say something along the lines of "yeah, I thought of that, but I didn't know what would happen."

I still believe that the reason a lot of players make moves like this and other ones of the sort is that they know more or less how they'll turn out. Because the result doesn't involve the death of any of their stones, they don't understand how bad it really is, so they'll choose it over a more complicated line that might get them into variations they couldn't foresee and possibly end with them getting killed. 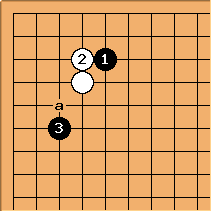 Calvin: Still amazed by the inexplicable incidence of this move, I searched the KGS high dan players archive. Eliminating handicap games where weird moves are the norm, I have found this variation a couple of times. It struck my memory that I have had this

played against me in a tournament! The combination of this appearing in handicap games (but by white instead of black!) indicates to me that it's probably a known "trick" move. I don't study hamete. Assuming now that it is a trick move, what are white's options in responding to

, and what could be the trick? (Yet another common variation played up to 3 kyu (but not by high dans) is at a instead of

Blake: Sometimes, when I play against a move like this, I panic and react idiotically. (I'm about 11k, so that's pretty much a given.) The idea seems to be that White will become afraid and turn inward for easy life... while Black connects on the outside and gets a wall at no cost to himself. A swindle that isn't so easy for double digit kyus to see, perhaps. "My group is alive, haha! His attack was futile," while the opponent has built a wall instead of two dead groups. 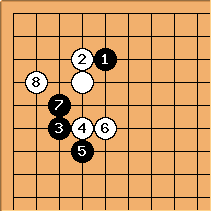 Bill: Thanks to the exchange,

, White can reply with

Dieter: I think that nonsensical moves by White in handicap games, have the purpose to take Black out of the well known patterns and test his real strength at technique and fighting. The first move may be bad, but followed up by a lot of good ones, the result may favour White, especially if Black makes bad mistakes.

"nonsensical moves" may be taking a risk (Often may be punished? maybe "not common"'s slightly better?) but going away from recognised patterns may indeed show the real strengh - The one used in calculating the handicape... Although on the other hand, normal play by both sides should be okay as well as long as the handi's correct. Reuven