We are told to play away from thickness. But sometimes stones are played and then the thickness is created.

Here is an example from a game. 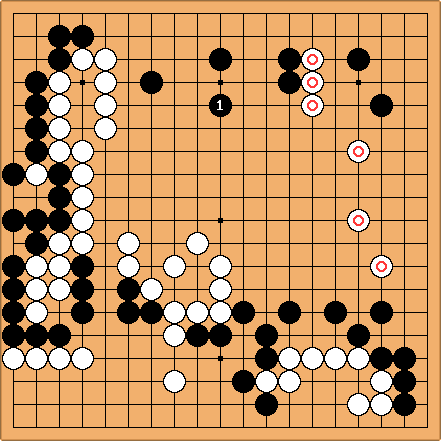 White's wall was created after the Black stones were played. Black played

to strengthen his stones for the coming onslaught.[1]

These questions also go for the bottom right (though to a lesser extent).[3]

In the actual game, White used a series of reducing moves to press into the territory controled by the Black stones, and as a result built a wall that surrounded the third side of a central territory. The reductions of Black and the wall were enough to generate a White victory.

Chris Hayashida: This isn't quite going to answer your question, but the proverb you quoted, "Play away from thickness" generally applies to earlier in the game than presented here.

Earlier on, White could have used his wall to invade the weaknesses in the black group before he protected. As the board stands, all of the groups look more or less stable, with the possible exception of the shimari in the upper right, if it gets shut in the corner.

As for Black, I think the best chance is to undercut or split the

stones and try to even out the game that way. Passively answering as White pushes down on the group at the top is definitely the wrong strategy.

[2] Charles In a sense this is nearly the endgame. White must count the game right now. That is the first piece of advice. If White has a win by converting thickness into secure territory, this is probably the best way. /Moves for White

[3] Charles I don't understand the comment. There is a reading problem connected with the lower right, which is quite important. /Lower right