In the following position, normally black will play atari at a. I think I understand the moves up to here, but I (14k) am having a hard time determining why black can't simply descend at 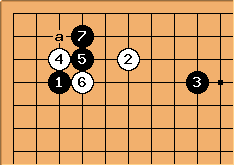 Note that if the pincer at

is used instead of

in the previous diagram, the following is joseki. I don't know why the position of the pincer matters in this case. Calvin

Dave: First of all we should realize that although the descent play at

is mentioned in Ishida, it probably can not be considered joseki. AFAIK it only appears to have been played once, Takagawa tried it as White in a no-komi game against Kitani in 1957. One time does not make it joseki.

Calvin: Point taken. It's hard to know what to think when you see a stone in a useless position like

in a joseki. Of course, that's supposedly okay because black lost two stones, and

may be in trouble now, too, depending on the rest of the board. But something about it feels kind of nasty, and I prefer the normal alternatives for white given later in this page. I'm not at the point where I think exchanging bad shape for something else is just like any other kind of exchange. 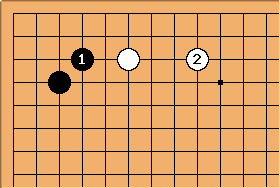 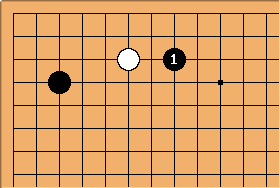 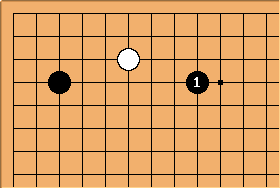 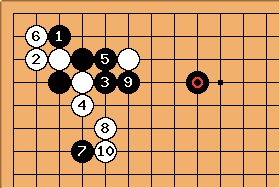 Black decided the usual joseki was not interesting. 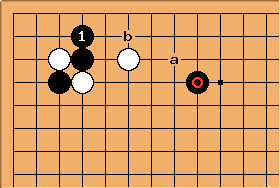 Note that when Black descends with the pincer at a there is a follow-up play to connect at b. That does not exist with Pincer 2 here. The Black descent is fundamentally less dynamic here. 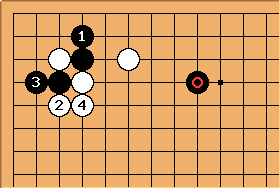 What if White simply plays

? The corner is relatively small. Black has to answer. Presumably White was interested in playing lightly when she chose the large-knight approach. Should Black be satisfied here? We can only know in the context of the whole board.

Bill: I, too, think that Dave's last diagram is a normal development after Black's sagari. Here is a possible continuation. 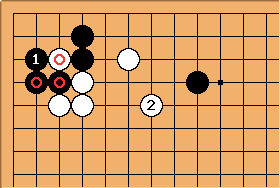 Since White has only one stone,

, in the corner, it is easy to sacrifice. That reveals a problem with the sagari. If Black plays atari on

instead, White will extend, making two stones, a larger investment for White to worry about in the corner.

This does not mean that the sagari is wrong or unplayable. It is on the passive side, and does not bear much relation to Black's pincer, however. Still, in the variation Dave and I give, White does need to patch up her shape. Also, if the variation in your Joseki diagram is considered an even exchange, Black would be better off with the hasami stone further away from White's strong stones, as in this case. (Do not approach strong stones.)

In general, don't worry whether a play is joseki or not. Joseki are standard patterns that typically yield an even exchange (more or less). Depending upon the situation, a joseki play can be bad and a non-joseki play can be good.

Dieter: Bill, I find it intriguing (but not surprising) that you choose this move

for making shape. With my fallible and often too rigid notion of shape, ... 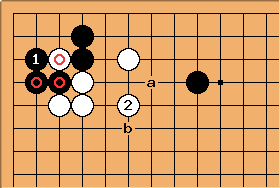 I would instinctively play here and see no objections for the natural move. Can you elaborate ? Now that I'm forced to think of it, I can see a couple of reasons :

Bill: Dear Dieter, your reasons seem good to me. :-) Anyway, I am far from an authority on shape, myself. While the keima was my first choice, I also considered the one space jump (never bad, hehe), but rejected it because of the peep at Ba. I also had the following diagram in mind. 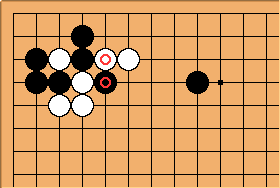 I am reminded of a remark of Prof. Berlekamp's during our analysis of the first environmental go game about a play of Rui Nai Wei's, to the effect that she always plays as far away as possible from a tactical situation to achieve her desired effect upon it. I expect that she does not always do that, but doing so ties in with the ideas of work and dual purpose plays. (The danger with trying to do that, OC, is becoming thin.)

After Black protects the corner, he has a major threat with

. What is the most efficient play for White to make that reply possible?

Charles I think Bill's play is superior to the plain table shape, in this case. I looked at Shape Up to see what was the closest example to this one. It might be problem 6 in the first problem set (see

http://gobase.org/studying/articles/matthews/shape_up/). Anyway, it is a good example for flexible thinking.