Environmental Go, also called "coupon go", devised by Elwyn Berlekamp, adds an environment of simple gote to regular go. This environment consists of a stack of coupons with certain values, usually one with each value between 1/2 and 20. At her turn a player may take a coupon instead of playing on the board. Taking a coupon, like a board play, removes any ban on taking a ko.

Click here to view a video of Dr. Berlekamp describing this variation.

Patrick Traill: This sounds like a sum of games, except for the usual problem with loopiness, or am I missing something?

One purpose of environmental go is to find out the opinions of professionals about the size of the largest play at any time. If the stack of cards were thick enough, with a very small increment between the values of coupons, then the largest play would always be the best play.

Jiang Zhujiu and Rui Naiwei played the first Environmental Go game in April 1998. Since then they have played a couple of more. An analysis of the first game has appeared in ''More Games of No Chance'', R. Nowakowski, ed., in 2002. See

here for the analysis.

Some of the Environmental Go games can be found

NickGeorge: Can someone explain this to me: 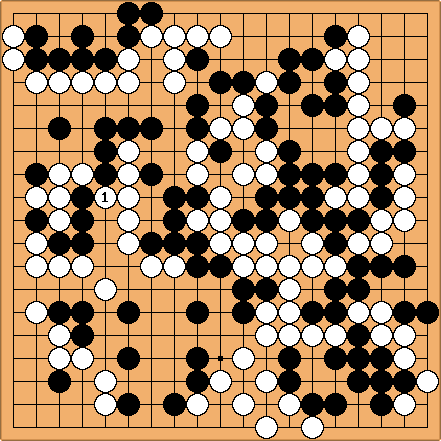 Bill: Without going into detail about the board play, let's consider taking the 5 point card. If Black takes it he gets 5 points (+5), while if White takes it she gets 5 points (-5 from Black's point of view). The difference is 10 points. By a common way of counting plays called deiri counting, taking the 5 point card is worth 10 points. By another method, miai counting, it is worth 5 points.

, as pointed out, is worth more than 8 points by deiri counting. That puts it in the same ballpark as taking the 5 point card.

NickGeorge: I considered miai vs. deiri counting, and decided it didn't matter which I used since both were gote. I was considering a 6 point gote play on the board and taking a 6 point card to be miai. They both cost a move. I guess the difference is that the card has a 12 point turn around, while the move is only a ~8(I think more like 11) point turn around. Perhaps a Gedanken experiment will help me...

(for ease of thinking, we'll call that cut 10 points by derriere counting.)

White cuts, black takes a 6 point card, both players trade equal moves for the rest of the game. I see white winning by 4. On the other hand, if white takes 6 points, black defends... white wins by 6. Brilliant. Thanks.

To assess gain and loss use miai counting.

Alex: To clarify for future readers (though it's now probably years after this discussion originally took place), the point is that either player can take the 5 point card and get 5 points from it. Thus, the difference between White taking the card and Black taking the card is 5 + 5 = 10. On the board, however, capturing the stones gets 10 points for White (6 territory + 4 prisoners), but connecting doesn't make any points for Black, so the difference between Black playing first and White playing first is 10 + 0 = 10.

There are 4 parts for the main talk, and then 3 parts for Q&A.