This is a postion from a game I'm currently playing on DGS (the game moved way far from this position so it should be safe to ask without good answer affecting current game). I'm playing black with 3 stones of handicap. 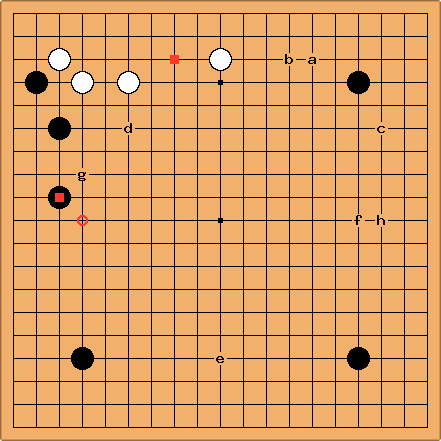 At this point I had a problem with finding a good move. It seems white group is strong enough that I have no useful way to attack it. On the other hand I don't have weak groups as well. Given that I'm ahead because of handicap stones I though I should just play safe and enforce one of hoshi stones by making an enclosure. The question is which one and in what direction to make an enclosure. I decided to play at a because: 1) it prevents white from ideal extenstion at b 2) it makes c less interesting for white (which I think is the point white should play next if I play in other area)

On the other hand I probably could play d to flatten white group or just take big point around e or f.

PurpleHaze: I would play f, and think it obviously superior to e which is the only other move I'd consider.

JTV: Why do you think f is superior to e?

Because f will leave a position where every black stone has another black stone as close or closer than the nearest white stone. The secret to handicap go is to pull all your stones together.

I'd rather have white near e where he will have a long run across the board to reach a friend, than near f with a shorter run.

phenomene (1 dan european) : I think the area around a is rather small because the white group is already stable. A move at d is not proper shape and it's difficult to build a moyo from this kind of low position anyway. Biggest points are e and f, of which I prefer e. The reason is that it builds a nice framework that white will have trouble to reduce. The upper right corner stone is in no danger at all. On the other hand, if black choses f, the san ren sei has only half of its value as there is already a white strong stone on the upper side to reduce its influence. I think white will then be happy to play a wedging move one line under e to split black position into two smaller parts (alternatively he could play an approach move on the lower side). Usually one big group is better than two small ones.

Alex Weldon: My two cents. First of all, I do agree with the general consensus that e and f are the only moves worth considering. Forgetting that for a moment, though, I wanted to say something about the original thinking behind a. There are two misconceptions at work. First is that you seem to believe that making an enclosure from a hoshi stone is a good idea. It usually isn't, except when it serves another purpose as well. Komoku is for enclosures. Hoshi is for making wide extensions, like e and f. Second, you say that you're preventing White's ideal extension at b. Ain't nothing ideal about a White move there; two-space extension is ideal from a lone third line stone. Here, the White group is already strong, so any extension from it is a big endgame move at best. Disabuse yourself of those two misconceptions (especially the latter), and you'll be at least a stone stronger.

Now, as for the question of e vs. f, PurpleHaze's comment notwithstanding, there is nothing obvious about which is superior to the other. I would side with Phenomene, though; e looks better to me, because it has Black positions on both adjacent sides, ready to expand the moyo, while f has a strong White position nearby, ready to reduce. The idea that a White wedge on the bottom has a long way to go to connect to the White top position doesn't hold water, since the whole idea of a wedge play is that it is guaranteed a base and can take care of itself.

A broader strategic idea to consider: this is a handicap game. If White plays fleet-footedly and tenukis often, you must attempt to exploit the weaknesses in her position. However, here White is playing slowly and solidly. All you need to do to take advantage of your handicap, then, is to develop on as large a scale as possible, hence e or f. Small, slow moves like a are precisely what will allow White to catch up.

kokiri: I agree broadly with the last few posts, that I would play at e. f looks like the second best to me. The reason that I would prefer it to f is because the black stones in the top left are helping to build a moyo. However, I would feel happier if I'd played the marked black stone at g as I think this goes better with the resulting position.

Bob McGuigan: I, too, would choose e over f because both the flanks of the san-ren-sei are clear. However, the black stones in the upper left are not much help in building a moyo. They are low, defensive stones so it is not efficient to build a moyo using them. For example, White has a good reducing shoulder hit at the

White's formation on the top is not invulnerable, by the way. It has a weak point at

which Black might well be able to exploit later in the game.

Bill: Let me join the chorus who feel that e is best. Let me also reiterate that a is crummy. First, it is not an enclosure. Second, it has little prospect, since White is reasonably solid on the top side.

However, in a three stone game I think that there is a good case for f (or even, <gasp>, h), especially at the kyu level. The reason is that White is threatening a kakari at c, and f or h forestalls that. This is in accord with the general principle of playing a fuseki that is easy for your side.

Klaus: I guess, that unless you are 3Dan or higher, it doesn't really matter weather you choose e or f if you choose eather one of them. Playing a might be considered a mistake, even at a lower level. Playing wide extention from a 44 Stone is the thing to be learned here, at least for us lesser players and not which extension might be 1.5 points better than the other.

Alex Weldon: True, but I would like to say that one of the beautiful things about Go is that any question can be approached on many levels. Though the first priority on a BQM page should be to answer the question at the level of the person who asked it, I think it would be a shame to let that preclude discussing the question at higher levels as well.

I also suspect that, against a strong enough opponent, the difference between e and f is more than 1.5 points. 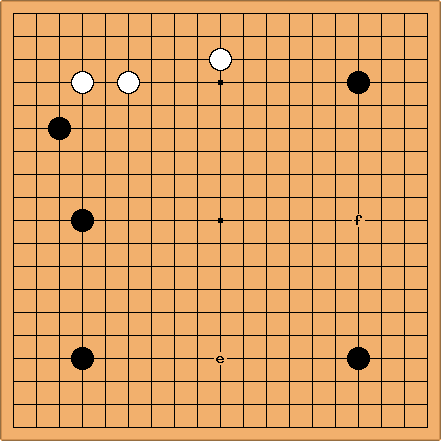 Klaus: In a position like in the second diagram, I can understand the difference between e and f, but I the given game, It might not matter to much. Given the low position of

, I would call It a matter of taste, because even pros seem to play seemingly "inferior" moves, when they feel like it.