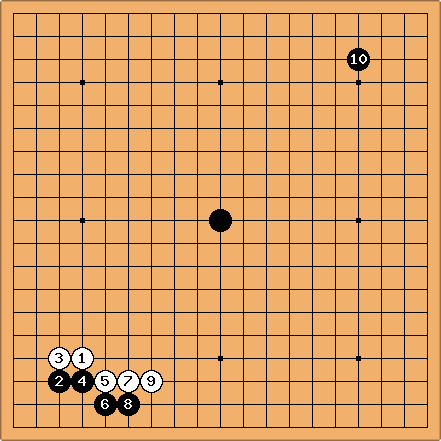 a reasonable tenuki, or will White be able to punish Black severely in the lower left (or elsewhere)? Thanks for the help.

AvatarDJFlux (2k): IMVVHO there is no need to tenuki, as the complete joseki sequence is pretty sente for Black. Especially with the black stone on Tengen I think White cannot afford to leave cutting points behind (a in the dia below), so she has to connect at

. Black can the play

.
Whether this is a viable fuseki for Black I do not know. "Tengen" games are veeeery difficult... 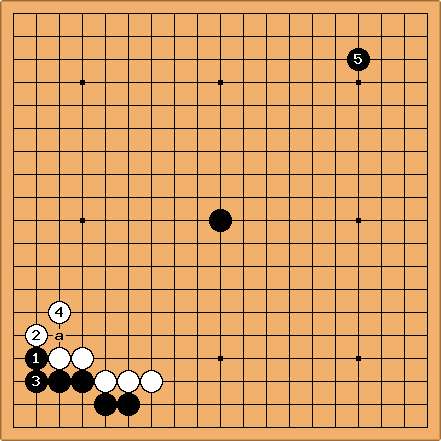 Rich: Well, it's not really an opening joseki to leap straight to the 3-3 invasion. Unless black has something outside the wall to counter the white influence, this is seen as advantageous for white. See 33PointInvasion, or read LessonsInTheFundamentalsOfGo.

SnotNose: First move of game, tengen. Not bad, just hard. Third move of game, 3-3. Likely bad as it seems inconsistent with tengen. 11-th move of game--tenuki from sente joseki. Bad. If Black continues this way, he is making the game harder than it need be. Established patterns exist for a reason. Breaking them is often (not always) bad.

But me wanted to know how White punishes in the lower left. I don't know if White can kill but she can sure shut in in sente. That's bad enough. 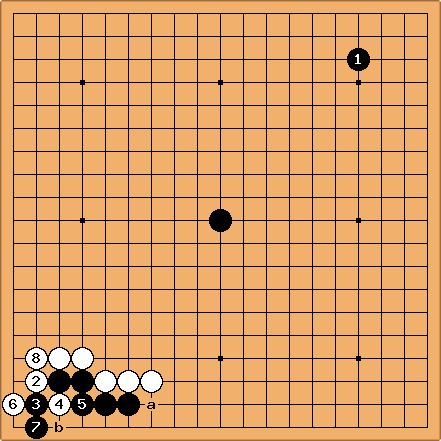 Hans Now a is sente for White. And Black is reluctant to play there since it is not good to crawl on the second line.

Bill: I think that Black does better to play

at b. Now 'White a only threatens a throw-in two stage ko that Black takes first.

Hans: 7 at b seems also possible but why is it better to leave behind the possibility of a ko instead of living unconditionally? 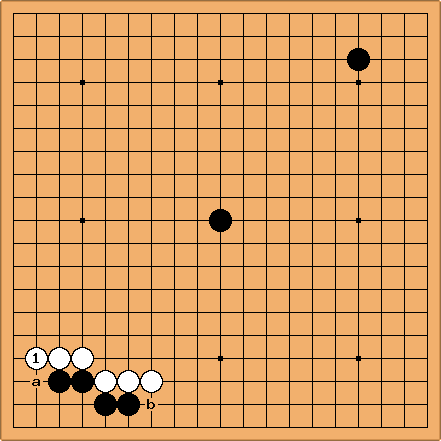 Charles I feel that Black is playing unreasonably: go really isn't like that. But it's a different matter to prove it. [1]

Perhaps White could play steadily with

here. Black must answer, to live; but if Black a, White b is sente. Therefore Black probably crawls once more at b.

The result is that Black gives away even more influence. One can't do more than indicate that this is an odd way to start a game.

BobMcGuigan: I agree that this is an odd way to start for Black. It seems greedy to me to switch to the upper right corner with

. And if White strengthens herself in the lower left a la Charles then it becomes unclear whether the tengen stone is erasing White's thickness or is a target for attack.

Klaus: I guess, Black must tenuki once again at that point! defending seems unreasonable, on an almoust emply board. By the way: which is the propper killing move for white?

I would't even try to punish the unreasonable tenuki right away. What about just playing in the empty upper left corner?

Charles Then Black can live in sente in the lower left.

is effectively double sente, though one can't speak like that at this stage.

A summary from me:

Tell me if this is basically what has been said: the first tenuki is unreasonable (aka greedy) because the 3-3 joseki ends in sente anyway. But, the reason White will play out the joseki and not deviate is because she knows that tengen will not negate her influence and she will be able to use it to defeat Black.

I feel this is the gist of it and is sufficient proof for me. Thanks for your time everyone. I have learned a great deal from you.

Charles A somewhat more subtle version of this kind of invasion was seen in the (very unusual) Black Sheep Rengo 2003 opening, from Black 11 onwards. There I think it all became truly difficult, for about 80 moves after that, to see whether White's thickness would be good enough.

[1] SnotNose: I find this an interesting statement, and one I agree with. One develops a sense of the unreasonable well before one can prove the unreasonable. And there are likely circumstances where the proof would be too long to be practical. A beginner might find it hard in this game as White. An experienced player will know that, slowly but surely, she can make her influence work. But it may not be until many moves later that Black collapses. Thus, ideas that go against basic principles of Go don't appear so odd to the short-sighted in the openning. Later the blame for loss might be mistakenly placed on some misread or other. But, the truth is that it is a long game and a bad opening will matter in the long run. Patience wins and Black has shown little of it here.