Solutions to the second series of quizzes

Well, nobody tries to answer, so here are the solutions.

This famous game was part of a 12-player team match, sponsored by the Mainichi, between the newly founded Kansai Ki-In (the West Team) and the Nihon Ki-In (the East Team). The match, which was a manifestation of the rivalry that already existed between the two associations, was won by the Tokyo team 7-5, a honourable result for the younger association.
This game, no komi, was played in Nagoya on February 11th and 12th, 1950. White was the great Hashimoto Utaro 8D, the Kansai captain, and black was the up-and-coming young star Yamabe Toshiro 5D, who played for the Nihon Ki-In.
When Yamabe defiantly played his first move on Tengen, Hashimoto instantly replyed with a kakari: in an escalation of fighting spirits and of unheard-of moves, Yamabe capped the white stone. What better start for such a match! 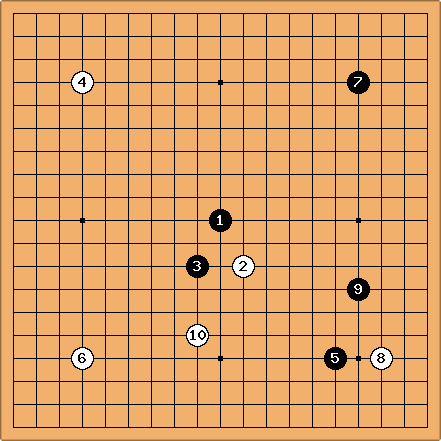 It is instructive to see how Hashimoto played two hoshis to counter Black's center influence.

Rest of the game record moved to its own page.

This one was very easy, and in our Library there's already a page on this event.

This was not easy at all. The player in question is Su Yoichi? 5D.