Do Not Peep at Cutting Points/Discussion 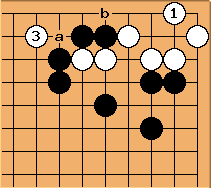 Comment: Depending on the situation, if White plays at

alone (instead of playing kikashi at b first) , then later the peep at

aLegendWai:
A 3-dan player once told me that

is generally bad. It is a typical thank-you move. It helps to enclose B's weaknesses without any good gain. (But there're exceptions.)

See also Do Not Peep At Cutting Points.

Anyway, it is just my little opinion. You may disagree with it.

Mef: as far as I've understood it, that proverb means that you shouldn't peep somewhere where the cut will work. In this case if white where to actually cut, black would kill the cutting stones quite handily. I think the question here is which side the forcing move would be more useful for white (i.e. is what's behind black solid territory, or is there aji white can use).

aLegendWai: I don't know much about the hidden meanings of this proverb. I just remember this page and link it as a reference (or relevant materials). By the way I think knowing the truth/facts are more important than trying hard to interpret the proverb, trying hard to think of some kinds of directions to justify the proverb. It is my special style anyway :P

The below is the facts (which I know). I once had a game with a 3 dan on the Internet. The situation is very similar to this one. I peeped the cutting point. After the review it said it is very wrong. You just helped the opponent. Yes, it helps the opponent to connect and raise its liberties.

Normally you won't achieve something good when you attach to the thickness so closely and help your opponent to enclose a weakness.

But different situations are different. It may be okay in special cases.

Alex Weldon: Do Not Peep at Cutting Points is another very ambiguously-phrased proverb, because it requires understanding what it means by "cutting point."

In the diagram above, a is not a cutting point, because White will never be able to cut there without a stone at

or b. Therefore, it's fine to play either of those points as a kikashi, as long as B can be expected to connect (if the cut follow-up is small enough that B will tenuki, that's a different issue altogether).

If W tried to cut at a at any point, his stone would be caught in a net, starting with Black b. Therefore, a is not a cutting point, and there's nothing wrong with W peeping at b (at least as far as this proverb is concerned... again, there could be other reasons not to peep, if B could resist or ignore). 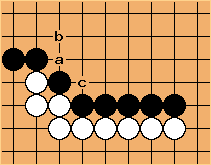 Now the point marked a is a cutting point, because if W plays there, B connects at c and W runs out at b, then there's no local way to capture the cutting stones. Therefore, peeping at b will very often be a bad idea. If Black is strong enough locally that cutting immediately is a bad idea, then it's better for W to leave it alone for later, or to play a move somewhere a little further away that aims at making the cut viable.

Of course, there's a foggy middleground, where the cutting stones can be captured, but in a way that leaves aji, or that is complicated and expansive enough that several different moves in the vicinity qualify as peeps. In those cases, you can't really use the proverb, and have to rely on experience, intuition and reading.

Chris Hayashida: I think I remember something like this in Lessons in the Fundamentals of Go. The wording there was slightly different. I think it read "Don't peep where you can cut." A little less ambiguous.

(Sebastian:) I love this wording! This sounds much more like a proverb, too. If "Do Not Peep at Cutting Points" is not already honoured by centuries of usage, I would prefer if we could rename the page to the straightforward version.

Still, there's something vague that needs clarification: the little word "can". I think aLW captured it well with his wording "[1] you simply cannot cut (or [2] will not cut in the future)". In the "Comment" diagram the proverb does not apply in the narrow sense [1], but it does apply if you take future possibility in account. For me, the wider sense admonishes me to seek an opportunity like b before bluntly peeping. 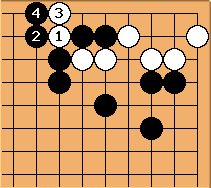 Chris Hayashida: I thought it might be easier to illustrate the point with the original diagram. If White plays

, Black will easily capture the stone. Therefore, White can't cut, and peeping with