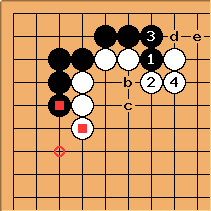 aLegendWai: 2 parts in this question.

Funkybside: I would guess, if this is the early game and is occuring the upper left corner of the goban, this exchange is not good for black. (Depending on the location of this group and the whole board situation of couse).

Remember: Forcing/sente moves are not good moves simply by virtue of being sente! Only if you can clearly see yourself in a better position (and hopefully your opponent in a worse one) is the exchange good. That is not the case here.

If this is early/mid game, then a black tenuki should be more valuable than erasing the potential at

- espically given the positions of the squared stones. IMHO, if there were a black stone at the circled point, then "maybe" this sequence could be played in an attempt to make white heavy by attacking near c with

. (If there are other stones around, that changes everything.)

Coconuts: White probably played this sequence looking for influence in the center and across the top of the board. Allowing white to play at

just seems far too good for her for black to allow.

Funkybside: Don't forget that if white does play at

, it's gote. Again I assume this is early in the game, where sente can be worth quite a bit. I also don't see a large difference between playing to

(at least as far as influence on the top/center and sente/gote is concerned). In fact, not playing the

sequence, and white playing at

leaves more aji in white's position, while black gets a free tenuki.

If this is later in the game and black is concerned with whites devlopment along the top, then playing this sequence followed by

at e may be a good tactic. Of course, a week from now I could have a different idea entirely :)

aLegendWai: Although I am the questioner, I still have the answers in mind. In fact, I feel B should not play like that.

I assume it is in early game.

But I am not sure if I am correct. I am a weak player anyway. So I asked questions in hope that the author will clear things up!

I am very happy that Funkybside and Coconuts kindly answered my questions. :D