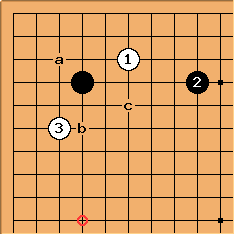 In the absence of the black stone on the side at the circled point,

is joseki: a double kakari here isn't an overplay. Alternatively,

may be played at a. The high kakari at b is a variation with only a slightly different flavour. For the jump answer at c, see catenaccio joseki 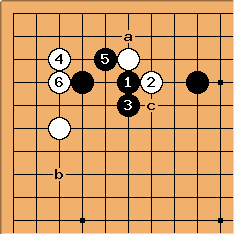 After the double kakari, matters can be expected to take a definite course: up to

here is a very well-trodden path in joseki.

After that Black a and b are joseki continuations. Black c is no longer: this variation died a sudden death in 1992 amongst the pros.

(See also BQM362 which starts with this position asking about one of the variations given in Kogo after a).

It turns out that white here can also play this way , from move 6 there are many variations , though the most common is show here . 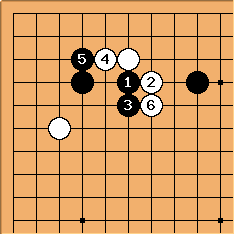 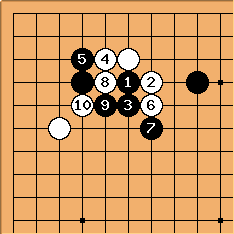 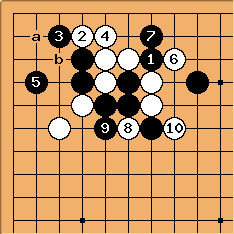 The variation is expected to go this way If white 6 at a , black ends up doing a squeeze against white by playing b. 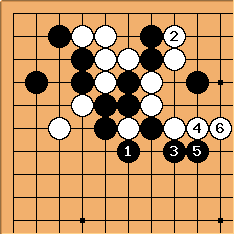 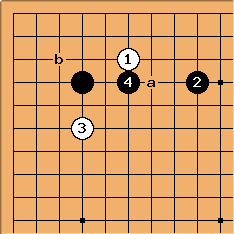 high is also possible. Then

is still good shape. Next White at a may be the expected answer; but White directly at b has been played consistently enough in pro games since 1994. 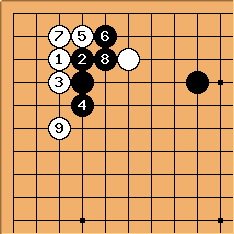 If White invades the corner to get settled, up to

is a common joseki. Alternatively,

can also be played at

Most likely, Black nows plays tenuki. There is some question about Black's play here, if Black does add a stone. 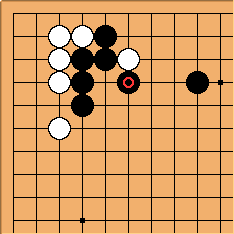 is taught as honte.

Dieter: We should cite a reference for this teaching, since it is not present in any pro game in database search on gobase where the upper right is not yet played out. Instead, Black will invariably tenuki to play in the upper right. (eoc) 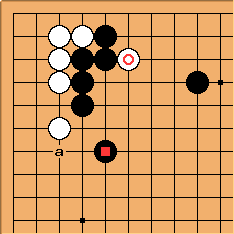 is normally treated as sente by White, because Black's move next at a feels severe.

- White a is often seen here before Black takes the initiative to play in another area of the board. With the play at

, Black is trying to confine the

stone on a larger scale. Naturally,

still has plenty of aji.

Dieter: Again, database search completely refutes this line, at least if the upper right is not played out yet. (eoc) 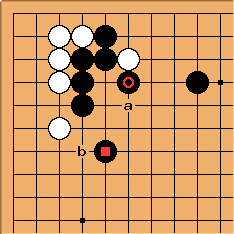 It is inefficient to add both

, though. This is Overconcentrated shape. See more at Honte / Discussion.

A compromise is for Black to play at a. This may have been invented by Kubomatsu in 1931. It gives Black a good next move here at b. 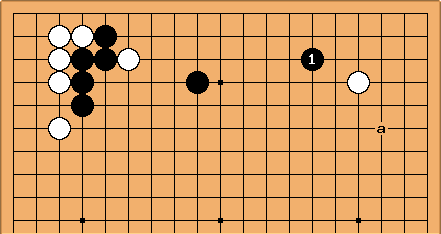 is the next move. In 11 games, interestingly most of which had Cho Hunhyeun? playing. Next there are two main variations. 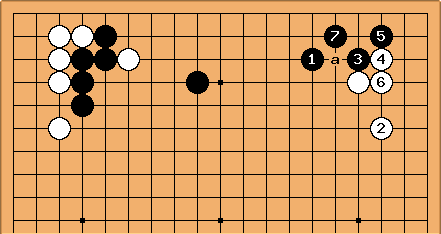 is low. Next, the attachment

follows in 19 games. In 11 cases we get this final result, where Black creates a solid top right. A similar result is reached in 8 games, where

is at a first but some complexity is involved. Search the position to learn more about this joseki. 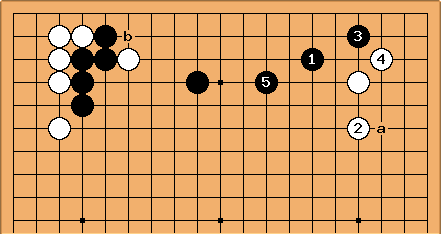 is common (15 games). The same sequence is also played in 11 games where

was at a. Next, play disperses.

In most other variations, either of the players will tenuki. But if Black tenukis from the upper right, it can be to launch an attack on the top left stones at b.

The point from this database search is that professionals use this joseki, as Black (or White, in reversed positions) to take sente and expand towards the upper right (or another corner, by transposition). The suggested moves in the above diagrams are not conceived. 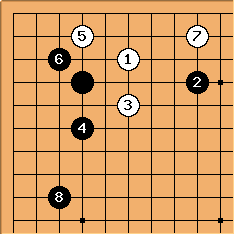