This is a question about the 4-4 point low approach, two-space high pincer, without side stone. 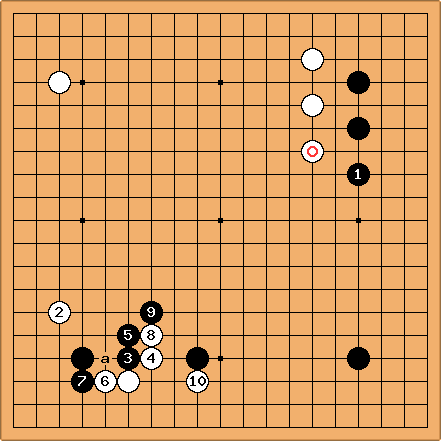 After the unfavorable exchange of

, White returns to the bottom left with

, where the aforementioned joseki starts. At

, Sensei's Library mentions a as the only move. In this game however, White plays

to reinforce her group. I find this a difficult move to cope with. 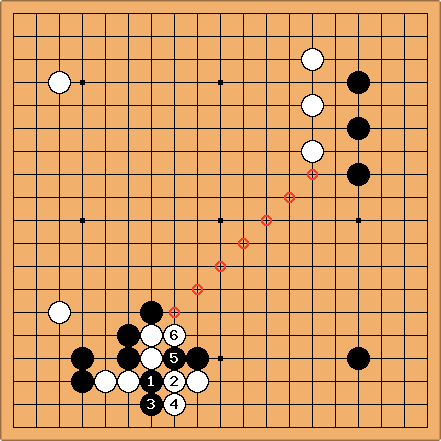 The first thing to notice is that the cut at

does not work because the ladder works for White. So it looks as if White has set up this position very astutely.

The calmer move of

here leads to a number of branches. Black must choose to defend the cut at either a or b with moreover multiple techniques to do so.

If Black defends with

. To my positional judgment, Black did not at all benefit from having the first move in the bottom left and is scattered.

here will force Black to sacrifice the two stones that block White's access to the centre, because Black cannot fight now. Up until

, Black gets nice territory and the influence of his tiger mouth towards his bottom right corner doesn't look too bad either. However, white is very thick and has sente.

And while I'm writing this, the answer knocks on my door. In the game, Black wedged at

here. When White cut at

, Black blocked and got into trouble with the fight, losing the corner and getting some influence.

But of course in this case too Black must simply yield. Now, after

, White is clearly overconcentrated and not as thick because the second eye may still require some definition later. Black on the other hand has the same territorial gain and one almost ponnuki