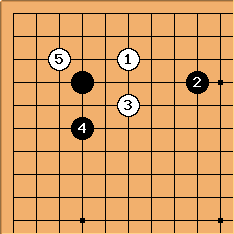 How should Black answer

? (This used to be a joseki variation of the already unpopular catenaccio joseki. 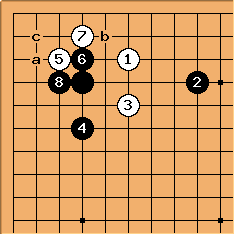 seems to be overconcentrated White doesn't get many points.

White a : Black plays b and cuts White. White lives in the corner in gote.
White b : White connects in gote. AJP: better for white to connect at c instead. 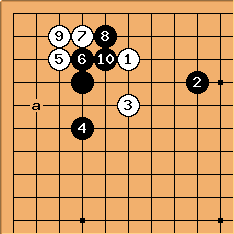 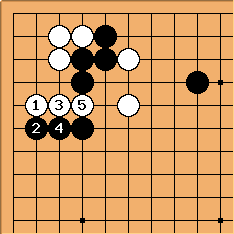 I got trouble in a game with this... how should Black play ? 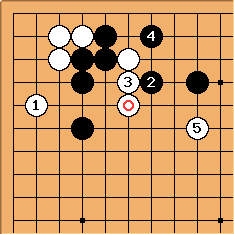 Anonymous: A Japanese 6-dan told me : Tenuki after

Bill: I wonder about the Japanese 6-dan's comment. Maybe there was no

stone in the position discussed. It is urgent here to attack rather than be attacked, it seems to me.

Bill: (A little later.) I did a search on GoBase. White's 3-3 invasion has occurred in very few games, as you might have guessed. When it has, Kogo's variation is typical, but without

unkx80: A likely reason why this "joseki" is rarely played out is because the one-space jump followed by the 3-3 invasion is not really following the flow in most cases - the feeling is that White wants to make moves both outside and inside the corner, which appears somewhat greedy. (Compared to the usual joseki where White directly enters the 3-3, White sacrifices the outside for a fairly large corner.) This results in a smaller corner, while the outside stones are somewhat heavy and subject to attack. 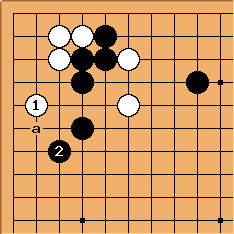 unkx80: If you must play on the left side, then

is a much thicker reply. a is way too thin.