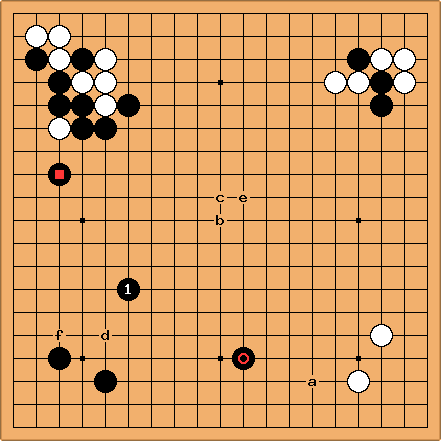 This is the 3rd game of the 29th Meijin title match between Cho U Honinbo (white) and Yoda Norimoto Meijin (black) [1].

The game was developing in a very strange manner.

First of all Cho U played kakari on move 2. Then all corners were taken by komoku - no hoshi stone in the fuseki is a rarity these days.

Then, on move 31, master Yoda played this strange

. Even if one could convince oneself that a moyo forming move is the best in this position, it is difficult to say why this particular point was chosen, as the stone does not seem to be connected well to anything else.

Yoda won the game rather easily.

I would like to understand how such decisions are made. And if this was the winning move in the game, how did it happen, that White allowed to have a lost position after 30 moves only? 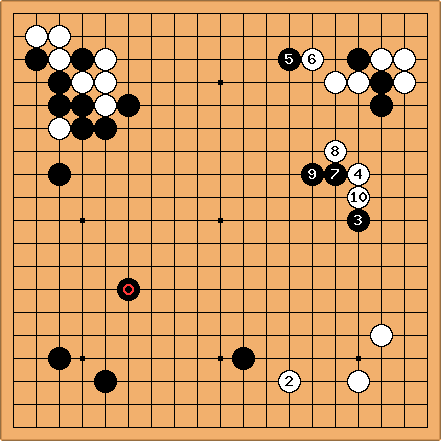 When I replayed this game first I was surprised, then delighted that Yoda Meijin could come up with such a move!

I think that what we can appreciate is the choice of a direction of play, the idea that Yoda found "natural" (?) to expand his moyo instead of doing something else. On the other hand, the choice of that exact point is, of course, beyond my comprehension span . . .

I've found some comments from Robert Jasiek on RGG, posted 2004-09-29. Here they are - I've just slightly edited them to make them more readable:

For B it is miai to reduce the upper or the right side. therefore increasing the value of his own moyo is a good idea.
a (in the diagram above) hardly construct the moyo on a big scale.
b or c offer W an ideal reduction like d but reduces the potential of the W moyos. However, the latter function does not outweigh the severeness of d.
d may be at the centre of both edges that construct the moyo but

is also far. I.e. d does not really prevent W reductions of the B moyo.
Although 31 does not prevent invasions or reductions, either, it constructs both moyo sides on a larger scale. If W invades, then B might get a chance to enclose either side as 6th line territory. Besides 31 prepares to make the moyo huge with another stone around c or e.
Summarizing, 31 increases the territory value of the B moyo.
Locally, 31 offers a good balance between the left and the lower sides and 31 mantains a reasonable shape connection with the corner.
31 is a move with multiple purposes, good balance, and tactical reason.
I would also have played 31. The reasons above let it be convincing. I do not know whether Yoda uses reasoning or feeling, though :)
Interestingly, only a few amateurs would find a move like 31 and all I know and that might choose 31 are EGF 5d or stronger (from fewer than half a dozen European players I would expect such a move). 31 is not a book move (not even a book's typical "one's best guess") but requires some non-standard insight.

The day after a certain i kraken posted the following comment about Japanese newspapers commentaries on the game:

from what i've seen, the details that the newspapers' websites give are a little underwhelming, but 31 doesn't seem to come in for much comment, nor 32, both of which surprised my struggling 2 kyu brain. Yoda thought for over an hour though on 35.

kokiri - a certain i kraken is me, I must confess. My comments about the websites is a general comment about the lack of interesting information on most of the newspapers' big title pages.

On another page, Charles Matthews makes reference to a possible weakness around f in the diagram in the layout that was played, and as it shows in the discussion, Cho did indeed play something similar in the continuation.

I would add that, interesting a move as 31 is, I'm not sure that anyone is calling it the winning move. IIRC, I read somewhere someone blaming something like 114 or so as the losing move . . .

John F. I've just seen the comments in Go Weekly. I don't think they support Robert in any way, though that's a side issue. My summary follows:

1. The other pros watching were surprised, so it wasn't what they would regard as a logical move. They'd never seen anything like it. A "usual" move for them in this position would have been one point below 31, a haengma move not mentioned here.

2. Yoda played it quickly, by feel.

3. Cho was nonplussed, so decided not to invade or erase yet. The move being looked at by everyone was two points above 31 - again conspicuous by its absence among the experts here.

4. Yoda did not treat it as a moyo-building move - at least in the sense meant here - he switched to 33 on the right.[2] Ryu Shikun, doing the NHK commentary, also expressed doubt that Black could win by surrounding the left side as territory (which would start two points above 31). At least he couldn't do this by ordinary means - there was too much risk of the moyo being erased, which would lose the game.

5. Yoda obviously agreed, and chose the strategy of 37, 39. This is referred to in Japanese as stereo-isation, or 3D-isation (rittaika), of a moyo, and it's another one of those concepts that is common in Japanese but never seems to get properly picked up in English (leading to the common but silly view that the Japanese either don't know much or don't reveal much about go theory),

6. The miai relationship on the right apparently did not involve the right and the top, as Robert claimed. There was a curious incident in the post-mortem. When they were playing over the game, they got to move 31 and then boobed (a photo shows them both craning over to look at the game record, apparently having been alerted to their boob). Judging by the photo, what seems to have happened is that Cho played 32 on the right centre and Yoda played Black 33 two points left of 4. This, therefore, seems to be the true miai situation on the right. It seems to indicate also an alternative line of play that both had considered and therefore still had in memory. It may also be indicative of the uncertainty induced by 31 in Cho. 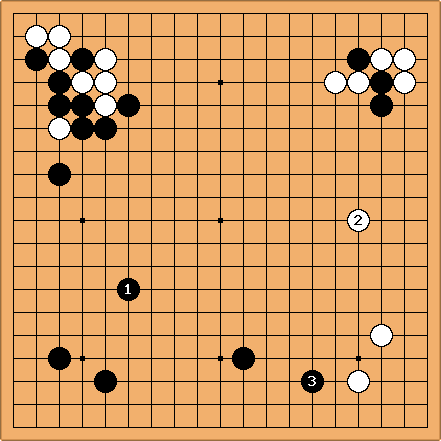 7. I haven't read the whole commentary - just as much as I could manage on the short train journey home from work - but Cho's loss seems to have been caused by the sealed move 82, out of kilter with his solid 70. 114 was indeed a mistake - 119 instead would have meant he could still fight on.In general it was seen that Cho lost the game for himself - in an unsual way, it said. Maybe 31 had a psychological effect?

Charles Well, it's interesting. The left-side formation of Black might be a bit suspect, by pro standards; I think that is part of the import of John's commentary. 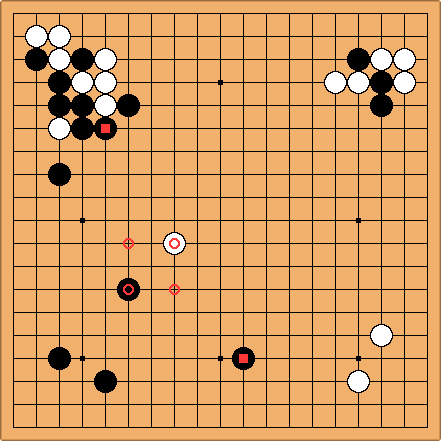 My intuition about it: after

, the two circled points are miai, in a sense. Why

points. Anyway there is some geometry here, but it seems not so connected with the lower left enclosure.

John F. Charles, I'm not clear where this red move comes from. If you are suggesting it as a play, I'd say it looks like a thank-you move, allowing Black to enclose the left for free. But if it's your inference from my previous remarks about "two points above Black 31", I meant two points straight up, where the little red dot is. 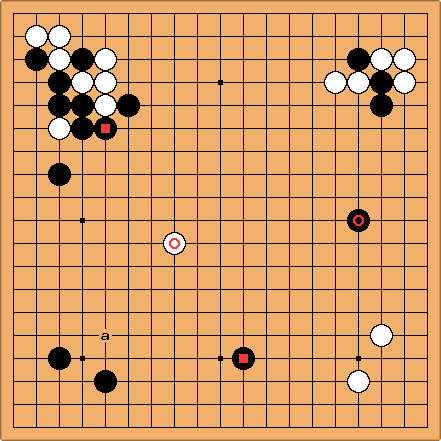 , just for the sake of argument,

follows the 'mid-point rule', of the Bruce Wilcox heuristics. That is, regarding the framework as defined the line from

This heuristic is discussed in Chapter 9 of Shape Up!, and I wouldn't say it was reliable. I just don't know any better one, in general, that applies to choosing a reduction play.

Anyway, the point of my comment is that Black 31 has one clear effect, of making

dnerra My immediate reaction in this situation as White would be to play at a. The marked move looks fuzzy to me. You are getting attacked without really destroying much terriotry. Needless to say, Yoda's

game at gobase. Tip: Try replaying the game up to move 31, using this page as a cheat sheet. (You don't need to be a gobase member for this game (yet?))

"Yoda did not treat it as a moyo-building move - at least in the sense meant here - he switched to 33 on the right."

No comprendo sennor. What sense of moyo-building are you referring to? -- Bill

John F. I thought I'd indicated that he was focusing on the centre-right rather than the left. And it's my sense that the sense meant here was the left. Right? Does that make sense now? Exit stage left as men in white coats appear...

dnerra: I think Yoda does treat it as a moyo-building move. Of course, he cannot play one-sided and just enclose the territory on the left, go (at least among pros) just isn't like that. But he plays

on the 4th line; and

makes it obvious that he is emphasizing the centre. Locally,

is slack in territory. It is just that the

is a moyo-building move that does not need an urgent follow-up. (I.e. I mildly disagree with Robert's assertion that Black planning to play around tengen very soonish.) Playing a move without urgent follow-up for either side is good strategy when there is a big miai left otherwise.

Charles Oddly enough there is an old game of Yoda's from 1986 in the Oteai where he also makes this shape - but there he is using it to limit White's central power. Maybe he just likes the idea.