For about a month I was in a bit of a funk, where I was losing just about every game I played. This of course tanked my rating. During this time I was also taking Black just about every game. Then I started playing White with this counter-opening and I've been scoring enormous success. I'm not sure what it is, but I've only lost a couple of games as White in the last couple of weeks on the internet, and none in person. Needless to say it broke my funk. Here it is. --BlueWyvern 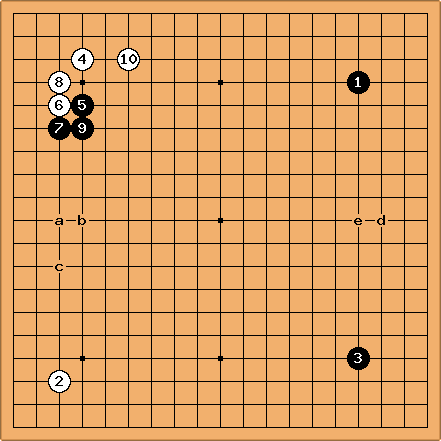 Here is the basic pattern. I've mainly just used this against influence based Fuseki patterns, such as SanRenSei and the ChineseOpening. The theory behind this opening is that it gives you two solid corners fast, and you can immediately commence destroying your opponents influence, without worrying too much about counter-attacks. I've found that the majority of people seem to like approaching the komoku with a high approach at 5. When this happens, attaching underneath and pulling back works perfectly well. You gain good profit and sente, and Black is virtually forced to play low at a, an influential loss. If Black plays at b, White c becomes a nice checking extension, threatening to invade and make massive profit along the side.

One possible continuation is to play the splitting move at d, then wear down the influence of the star stones to the point where you can invade at the three-three point. I've found that if I can get all four corners with this opening, the game is mine. Keep in mind if you follow this strategy, you will need to have a couple of big corners, and reduce the center a bit. Having all four corners is no guarentee of winning, especially if your opponent controls the rest of the board. :-)

KarlKnechtel: I like the wedge here too - but if you're aiming to 'wear down influence', why not play for it yourself on that side of the board (i.e. d at e instead)?

Scartol: I have a question about that black group in the upper right.

splice: I've actually been using the same type of opening. I started off with san-san and non-facing komoku, but I think I prefer facing komoku. It was iffy at first, what with a totally new opening (I was previously using either nirensei or hoshi and komoku, mostly, with once or twice omokuhazushi). But I levelled off, won some 10-15 straight games, lost once or twice, and started winning again. It is a very interesting opening to me.

HolIgor: Having no understanding of the opening, I'd like to comment on this idea anyway. I've played quite a lot of san-san myself and was quite content with the results at the moment. But, it is not a universal solution or recipe for a win. As usual it works against the guys that don't know how to counter the plan. But with the stronger players you will be pressed down easily. 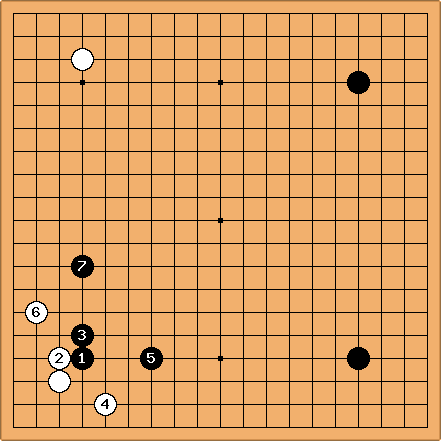 Do you have a plan how to play in this situation? Since san-san is so territorial and robust the one thing that the opponent does not want to allow you is to make a moyo based on it. So, the first task for Black would be to eliminate this possibility creating at the same time a huge framework of high stones. The fight in the middle will be favourable for black.

At the same time you have to remember that White's territory on the first diagram is too small yet to win.

Anyway, this is my understanding and experience. I am weak at fuseki though.

BlueWyvern: Actually, people do play this quite frequently, the problem is, pressing down straight away can be premature. The stones doing the pressing down are without any base or eyespace whatsoever and can turn out to be quite heavy. I on the other hand have a solid position underneath which I do not have to worry about that holds quite a bit of profit. Several times I have been able to successfully attack the pressing-down group, building me enough strength in the center to combat the star stones' influence in the process. In my experiance, almost no one at my level gets the timing of the press-down right, and by the time people do, I also feel like I'll have improved.

Anyway, if you are aware of how Black has to play, you can take measures to counter it. Incidentally, I've always like an influence-building strategy more, but I find that this is perhaps helping me understand influence a little better.

kungfu I may not be up to date with the modern lines, but I believe either 5 or 7 above is a space too far (7?)

SAS: Why do you believe this? They look like the usual moves to me.

Kungfu The magic is not limited to nirensei, as Nie Weiping showed in his book. Here are some moves I remember: 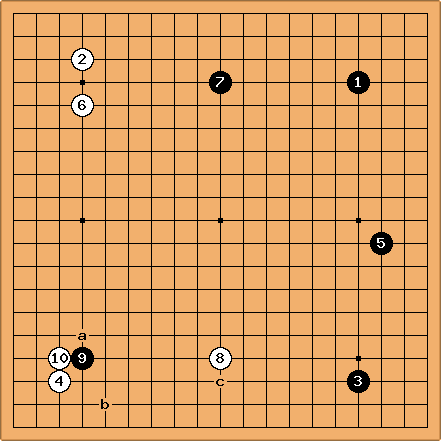 Black 11 at a, White 12 at b. I think I forget the true position of 7 and 8, but this is the basic picture as I remember it. 7 and 8 or around there are miai, I think. DaveSigaty - Nie Weiping vs Iwata Tatsuaki (Black) 1976-04-17 in the Japan-China Go Exchange. I corrected 8 from the original position at c. 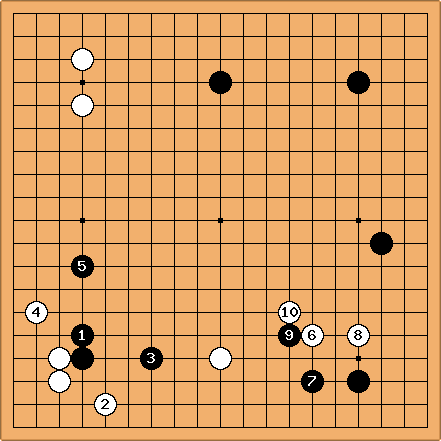 Statistics for this pattern.