On the page 3-4 point with parallel 3-3 point, BlueWyvern posts a diagram of the following opening: 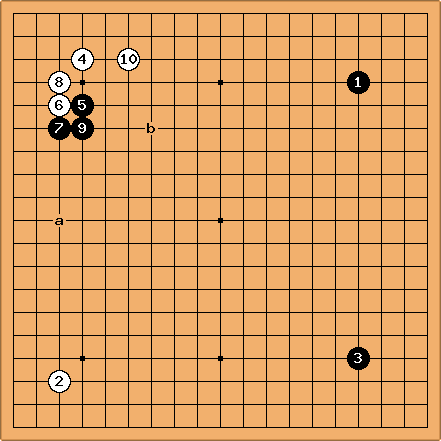 My question is this: Is there any alternative to Black 11 at the area around a? The connection at

, while necessary, feels very small for the ninth move of the game. Since it serves to primarily build influence, it feels like a white play at a would crush the power of those three stones (and make it imperative for Black to start running).

I haven't played this exact sequence, but I've had a number of similar scenarios, and after White a, I'm stuck for a response. Thanks in advance for any feedback you can offer.

This type of questions needs one answer: your repository at gobase. I'll have a look myself. --Dieter

is not necessary. Your instincts are good. Even though this is joseki, it favors White on an empty board.

around a. Then, if White played a pincer around there, they would make a two space jump to b.

However, on this board I think it would be unwise to allow W a - B b. 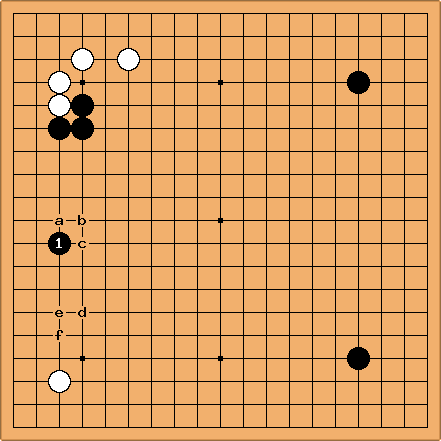 Charles Matthews Once you connect solidly, you really have to stabilise a group on the left side. If you're unwilling to spend that time, better to omit

One can extend to

here for greater efficiency: the other plays at a, b and c are good too. It is also possible to play in the direction of d and then extend back next play. Any of Black a to f seems reasonable. 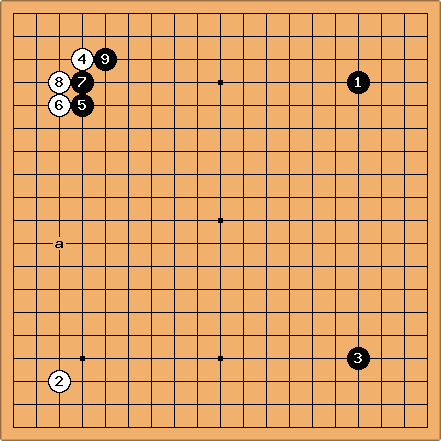 Stefan: This is not exactly an answer to your question, but one thing you could consider is going for a nadare variation with

instead. This joseki fits well in the overall context: Black has something working with the

nirensei, and the low position of

makes any white or black play around a less interesting.