Respond to attachment with hane

The proverb recommends to respond with hane to an attachment. 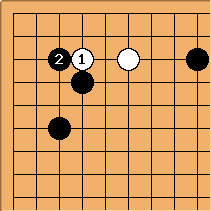 White 1 intends to settle up quickly here. When you are weak and the opposition is strong you should play closer to the opponent's stones. 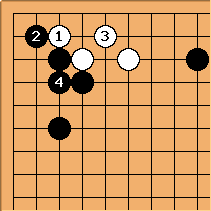 Before playing 1 (or even before the attachment) white should check if the ladder is favourable for him. 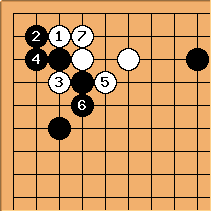 unkx80: I think not so good. White ends up in gote instead. 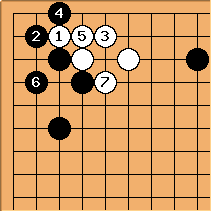 bud1027: This is a standard sequence. 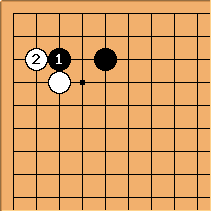 is joseki, even if the hane is on the second line! 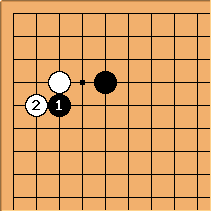 is just the right move! 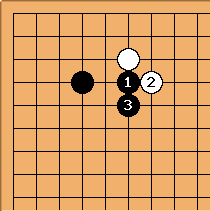 Most of us will know this one... 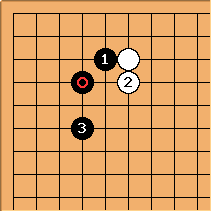 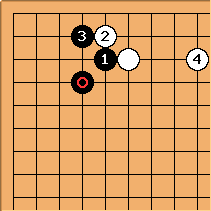 An attachment in to the corner stone early in the game is bad for the side that attaches. Discussion about how uncomfortable things go if such an attachment is made could be found in /Discussion.

BobMcGuigan: Like all proverbs this one has exceptions. Often one should respond to an attachment with an extension (stretch). Doing this often gives less help to the attacher, making him/her work harder, and gives the attacher fewer forcing moves.

Charles Matthews That's quite true, but if one looks how pros play it depends rather on the specific situation.

is more common as an answer to

than White at a, according to a database search I've just run. The advantage of

is that it takes away Black's possible sabaki techniques here: we can assume Black is defending, or

is more commonly answered with

than with White at a, though both are frequent in practice. Black will presumably continue now with

is at a then

at b is expected. The motivation for playing White at a is often explained as 'not giving Black momentum'. It is actually when White is in a position to attack that one expects to see the heavier response at a from White.

So in both these cases it seems that avoiding the hane answer is connected to a wish to attack with a free hand, by not leaving cutting points.