Respond to attachment with hane / Discussion

FCS: If your opponent attaches with a stone which is relatively unprotected, a hane is recommended.

MortenPahle: I don't think that the example is very good here.

will (or should) never (?) attach in this situation. Also, the white stone, is not really unprotected - it's on the third line in the corner and is quite strong. Attachments are not used for attack - the hane or extension both strengthen the 'attacked' stone a lot more than the attacking stone wants. Attack is done from afar. When attachments are used, they are often already attached to an existing string (i.e. they are extensions themselves) or they end up being used as sacrifices. I think that the distinction betweeen playing an extension or a hane when attached against will always depend on the surrounding situation, and that a general 'respond to attachment with hane/extension' is of little use. You should find a good example for both these cases. Generally, I think a 'Don't ever attach' proverb is more likely to be useful :-) 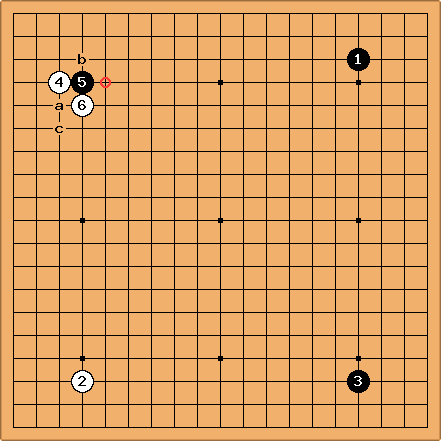 FCS: If Black cross-cuts at a, White has sente and can respond at c.

MortenPahle: No. See crosscut then extend. In this case, Black will answer the atari with an extension and it is White who finds herself with weak stones.

FCS: If Black extends to b, White can drive him to the edge and claim the corner.

MortenPahle: More likely, he will play at the circled point and extend on the fourth line. This is not really what he would ideally like, but that is his own fault for attaching to the white stone to begin with. Even a black hane (next to 6) is better - invite a cross-cut, extend and start an interesting battle. Black should never play b - it doesn't make a base, doesn't create influence, doesn't attack White and doesn't take territory; and doesn't really even strengthen his own stone ;^)

FCS: If the attaching stone,

, has other stones to help back it up, then a hane is not the best option.