Path: <= Special Properties of the Corner =>
Sub-page of UglyDescent

unkx80: Previous contents of ugly sagari page here. Most of the discussion is obsoleted by the change of example.

HolIgor: I would call this ugly sagari tesuji. It appear with two unfriendly stones that cut off our forces and there is some shortage of liberties. The following diagram is just a general scheme. But the move is useful to remember. 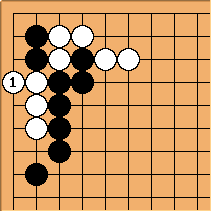 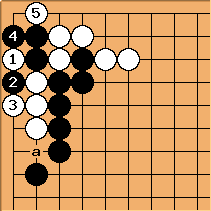 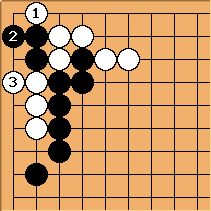 , White makes the ugly sagari all the same. Isn't this better ? 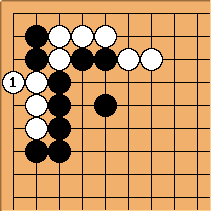 unkx80: I believe this is an instance where the "ugly sagari" is the only correct move.

John F. Excellent name! And like the ugly duckling it can turn out to be a beautiful swan.

AYHAL? Another alternative to consider which is often useful: 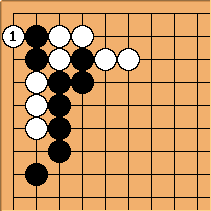 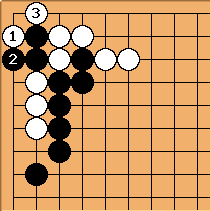 unkx80: However, this results in a ko when the "ugly sagari" tesuji wins the capturing race without ko. 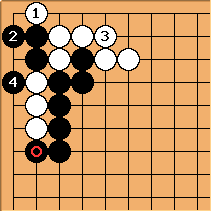 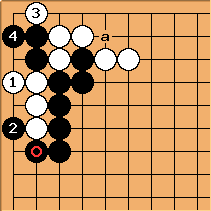 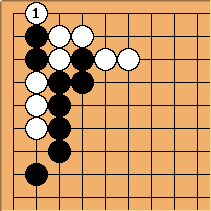 Neil: Is sagari really necessary? Isn't there an English term for dropping down a line like that? Gratuitous use of Japanese just makes the whole site harder to read.

unkx80: I realised that this appears to be an instance of the descent tesuji. Time to merge the two?

Bill: Merge? Maybe. Cross-reference, certainly, but the other one is not ugly. ;-)

But go is an international game, and even though there is an English term, descent, that we could use instead of sagari, the latter term is also well known among English speaking go players. On SL you will find English, Japanese, Chinese, Korean, and even Dutch and French go terms. Yes, there is some difficulty and confusion associated with that, but on the other hand it perhaps helps to make non-English speaking go players a bit more welcome.

Besides, one problem with trying to enforce the use of English terms is that there is not always agreement about them. Go is relatively new to the West, and Western terminology is not yet settled. That is part of the problem you perceive. There are a lot of English speaking go players who learned the term, sagari, when there was no commonly accepted English term to learn. At my local go club, where nearly all the players are native English speakers, if you showed them a descent and asked them what the play was called, most of them would say, sagari. That's what they learned.

All of this does not mean that I am not in general agreement with you. If one knows a generally accepted English go term, I think that it is usually best to use it, especially for page titles. Use the other terms for alias page titles.

Bob McGuigan: Even descent has a technical meaning in go and can be confusing for beginners. For example, in printed game commentaries referring to a diagram a descent play might appear to be one space above another stone in the diagram. Because we have to learn a new meaning for "descent" I'm not sure it's so bad to use sagari.

Neil: Well, it all depends on how much Japanese you expect a person to understand before being able to make use of this site. Will readers be able to focus on the game concepts, or will the concepts be obscured by the foreign jargon? Wiki hyperlinks all over the place are not a substitute for clear writing.

Bill: Well, knowing the go term, sagari, gave me more of an idea about the page, Ugly Sagari before seeing it than if I had not known the term. After seeing it, I don't think that fact matters much. If the page had been called Ugly Descent, and I knew the English word, descent, but not the go term, descent, I'm not sure it would have helped much. Hard to judge, since I knew all of these terms beforehand. ;-)