The correct answer is 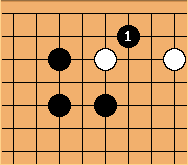 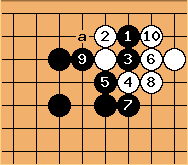 at a is normal here. 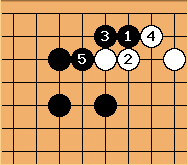 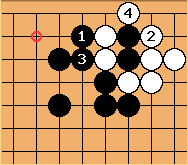 Charles The timing of

may be a little difficult - but probably not yet. I think playing

first changes some aji around the circled point. Anyway, it seems that the pros play this way.

Dieter: Possibly. What is certain is that Guo Juan teaches in levels.

FlorisBarthel?: How do you mean Dieter?

Dieter: Firstly I was guessing that you learnt this sabaki technique from Guo. Moreover, I'm getting a little suspicious of our SL habit (which I contributed to) of evaluating every single technique by looking at what the pros do. I think that some sequences may be slightly less effective than what the pros fancy, but still way good enough for us to apply. I suspect that an established teacher, when she is taking a three month newbie to the level of 5k, may settle for techniques which are stylish and easy to visualize, rather than stick to the (newest) pro variations. Generally speaking, we may just have swung a little too much towards the pro database here at SL.

Stefan: ...and what is also certain is that Dieter is saying this because he's very busy looking at the fancy, funny-looking, recently researched moves by the Korean pros, but generally prefers to keep things simple rather than go for the arcane variation with 1/7 of a point better aji. ;-)

Floris: Yes, I understand now. Indeed Guo does teach in levels. During her lessons she also ponders whether to teach a certain something this lesson or the next. But she does not teach bad habits, she will just teach keep it simple and shapish until you are ready to comprehend more complex variations.

Charles We can discuss what the pros do (why not?), and we can also discuss what Guo Juan teaches (why not?). But I obviously have a problem discussing why she teaches what she teaches. I'm just about strong enough to do that - and I teach too, in my way. But if I guess 'that's a Guo Juan lesson' there comes a difficulty for me of making an authentic comment.

I think her teaching is very useful; but she doesn't say that there is just one way about anything. In fact I thought she rather disliked this attitude. 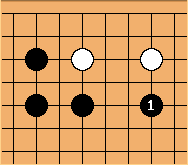 When I did a database search on this, the other main candidate move was

So, this is an attacking play, not just a defensive, shape-making move. I knew the shape move, indeed: but this

was a new idea to me. Of course in a classroom the teacher should say 'shut up, Charles', because today's lesson isn't about that.

Floris: I guess this move really depends on the surroundings and whole board context. Cause' the extra stone in the problem could also be at other positions nearby. The problem is also to make shape, and this move still leaves the aji of a Tower Peep