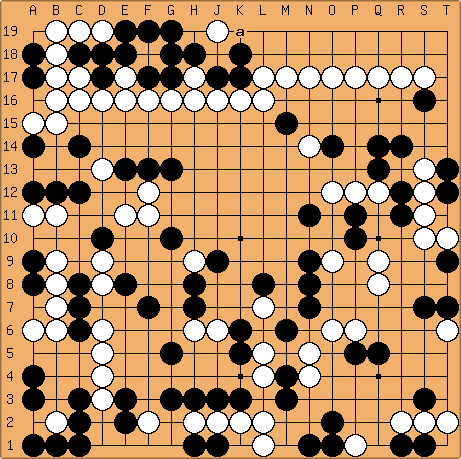 Because the solution is very long, and Sensei's Library only allow ten moves per diagram, you can make an attempt by writing the color and coordinate of the last move, or by providing a finished diagram with only the last few moves. 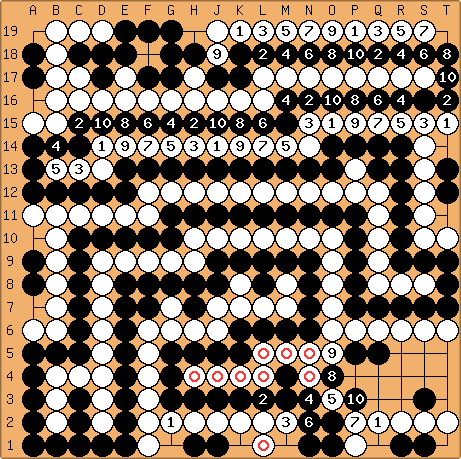 hmm i don't see the solution from here, it seems I lack one white stone for instance on a or b, however I could have made a mistake somewhere.

Herman: Sorry, a stone was indeed missing! Stone added at

(the a you mention)

ThorAvaTahr: Still I don't see the solution. (black will make an eye and white cannot even approach, but even if white could approach, the temporary seki will lead to white's destruction. The problem for me is that the marked stones are too weak, a possible black atari at c gives black too many liberties. maybe I failed to connect them earlier in the ladder.

Herman: As far as I can tell, the problem is now correct, so you must've gone wrong somewhere ;-)

unkx80: I know I have no hope of reading it all out, so I played it out using a SGF editor. One move in ThorAvaTahr's attempt is wrong. =)

ThorAvaTahr: Yeah, hmm I allready doubted the part where I went wrong, but it seemed ok at the time. Solved it now

Tasky: I tried the problem and got to an apparent solution... the last white move is t4... anyway I have a problem, what does w do if b playes atari at o5 when w playes p3?

Anon- Though it is not a great solution, would numbering this long solution in the manner here be acceptable? It's not the best solution, but most moves are directly next to eachother, so the flow of the problem should be easy to read.

StephenM: Yeah, if black plays atari at O5 then white is doomed. This is because the sequence around M8 is incorrect. White M8 appears to work by leaves N5 and O6 separated. The correct move is M9. See my solution at the end of this page. 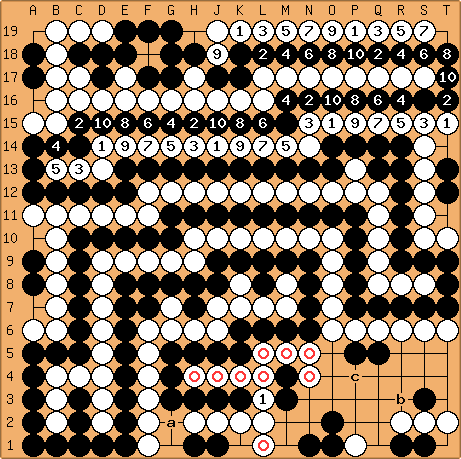 Bass: There's an atari at a. 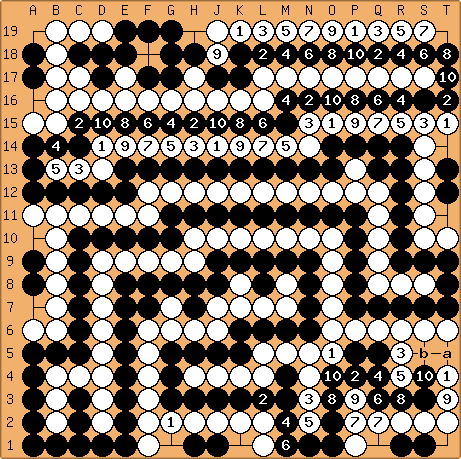 a and b are miai.

StephenM - if black plays a, isn't it a snap-back? It is a loose ladder so black isn't in atari, yet. 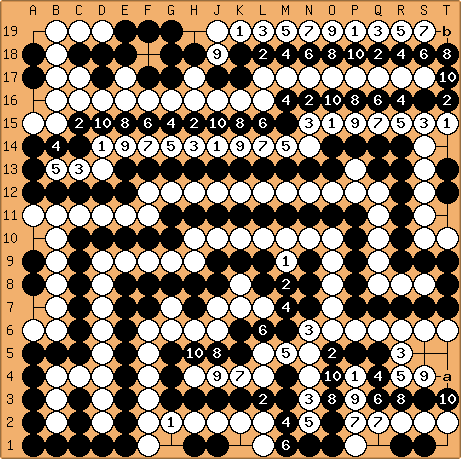 StephenM This sequence (numbered where necessary) solves all the problems I found with the sequence, above, and leaves white to play atari at a and then capture at b.