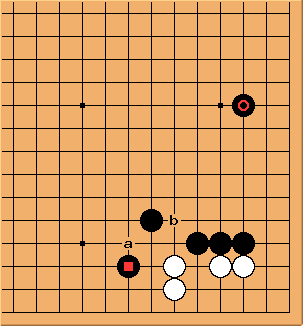 In this familiar result of a 3-3 invasion White has taken territory in the corner and Black has created a group, consisting of a wall with an extension at

plus an extra stone at

. The black configuration influences the center and the right side.

However, the configuration has two keima shapes which can be cut at a and b. Therefore ... 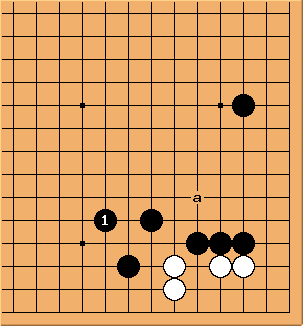 ... if White plays elsewhere, Black can remove the threat of a cut with

. This creates a thick position, and is the kind of play seen in games of Takemiya.

Even so, White has a possible forcing move here, at a. 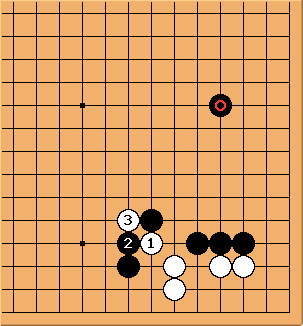 Without the thick move, White can certainly cut bluntly with

Black in fact normally reacts by running back at

, instead of blocking at

. Therefore it is quite usual, in this case, for White to be allowed to cut right through.

By the way, it would be more usual to see

on the fourth line, as shown here. Otherwise Black's framework can be reduced quite easily, by a shoulderhit. 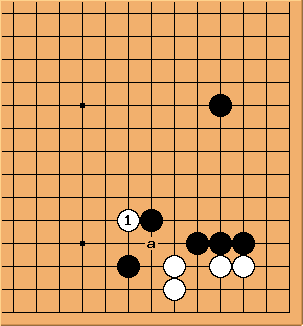 Another interesting way available here is the contact play

White will only play this when a solid answer such as Black a looks passive: i.e., when White is happy as long as

is kikashi. This move has been used by top players.

It has been used as a ladder breaker. (cf. Go Seigen's book A way of play for the 21st century) 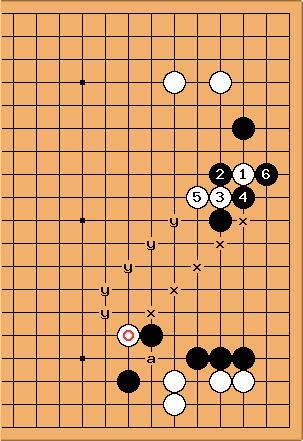