This page gives an overview of shapes on the side in relation to life and death. For fuseki patterns on the side see side patterns and for joseki occuring on the side of the board see side joseki.

There are a lot of shapes on the side which occur regularly. To save yourself the time of reading out their status every time, it is useful to study these basic shapes and remember what their status is.

On this page we want to give a comprehensive overview of all common different side shapes.

Feel free add links to other common side shapes.

An overview of basic shapes outside the side can be found on the life and death page. And on the corner shapes page that can be seen as a sister page of this page.

On the second line Six die but eight live, seven are unsettled.

On the third line Four die but six live.

The term notchers was invented by James Davies. it doesn't matter where if the notch is at an end or in the middle of the group. Also groups where one or two of the corners are missing are discussed on the page. 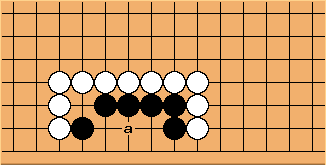 Three-space notchers are groups that consist of a chain on the second line, interrupted by a notch of three empty spaces on the second line and three stones above them on the third. The rule for a three space notcher is either "Four die, Six live" or "Five is unsettled". Verify for yourself that Black can live and White can kill by playing at a in the diagram. For this reason a is called the vital point of this formation.

The comb formation is alive, so long as the

points are both liberties. The points a and b are miai. If either

is not a liberty, the shape is unsettled and can killed with snapback after a placement at b. 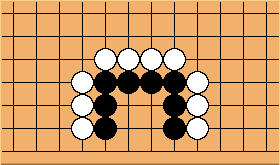 This black shape is the door group, as it stands it is dead. 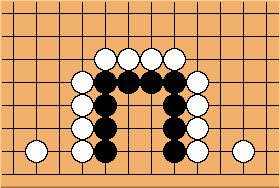 Compare with the door group, the tall door group is one line taller. It is alive. Although White can make a seki of it.

Also more esoteric shapes can exist on the side. Here an example of Eternal life. Who wins and loses depends also under which set of rules the game is played. For example under Japanese rules it is a no result game. 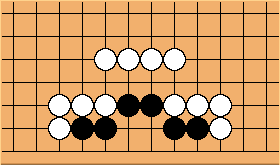 The flying saucer shape is dead