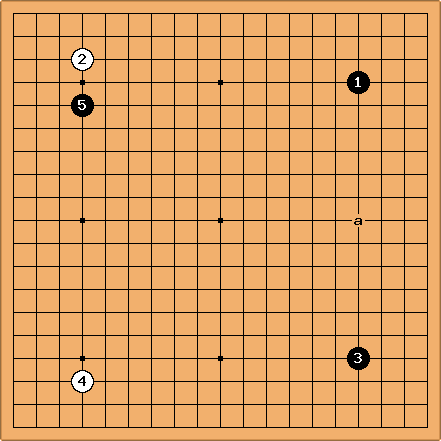 kb: Why wouldn't Black play the Sanrensei at a? Is it too slow? (Of course, related discussion at BQM321)

Dieter: For one thing, it doesn't matter, not even at pro level I think. For another, it would certainly not be slow, since a stresses the development of the area, whereas

tackles the stability of

, while making itself prone to attack. If anything a would be too fast, but not aggressive enough.

Andy Pierce: Also, a black approach in either the top left or bottom left are miai. A symmetrical play by black like a is appropriate. If white can be forced to break the symmetry of the position, black can make a more effective choice of approach.

Charles I don't think you can really argue that way. And a database search shows it 5 to 1 in favour of the approach move, over the sanrensei. Remember that many pros don't think of sanrensei as really sound, strategically. Takemiya has shown that it can't be written off, but other top guys don't get the same results with it.