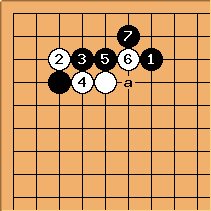 from beneath (rather than at a) is given superficial treatment in Ishida - just two diagrams. See 3-4 point high approach one-space low pincer for those. There is a ladder question, but this joseki occurs in pro games even when the ladder is good for White.

That is, the following development is sometimes seen: 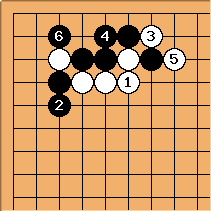 Naturally with a bad ladder

will prepare for a net instead. 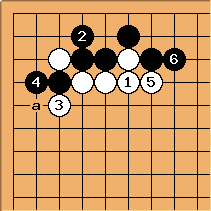 is correct shape to hold everything together.

as shown is now joseki: Ishida gives White at a (Sakata Eio-Fujisawa Hideyuki 1961-03-08) which appears now to be obsolete. The issue now is whether or how White continues to push along. There is some curious aji in the corner. 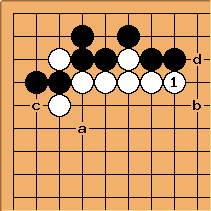 here is normal, with a and b also having been played. Black responds at c or d (but not hane [1]). White in the latter case then closes off the open skirt or gets ahead with the knight's move. 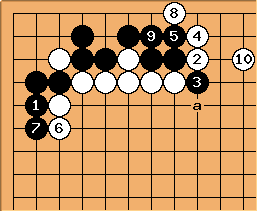 Hashimoto Utaro-Rin Kaiho 1974-05-02 continued in this way, with Black 11 at a for a fight in the centre. Omitting 6 was tried in a recent Korean game.

[1] Black hane in response to

was played by Christoph Gerlach 5d against Hans Pietsch in the 1996 Fujitsu Cup. White cut immediately. 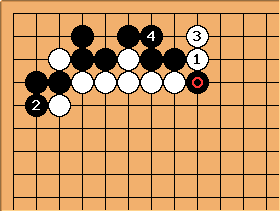 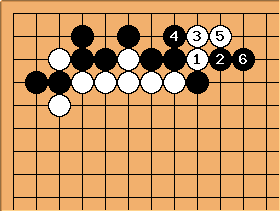 Seong-june Kim 6d gives this variation. This looks bad for White, unless there is some corner aji to use.

Pushing Battles in Joseki 8 Corner Aji Discussion: what can White do in the corner now?

togo: It should be noted that the three white stones don't have to survive to be useful. They can be aji themselves or can be immediately sacrificed. 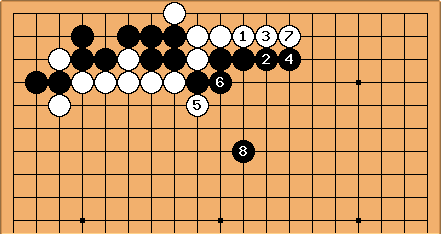 A Korean book considers this possible situation, with

avoiding being shut in rather than attending to the corner.

Go to Pushing battles in joseki 9