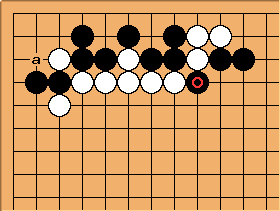 This position arose for consideration on pushing battles in joseki 8. Here

may well have been an overplay; but how does White show that, from this position? White at a is naturally an important resource.

Those with the Korean version of the Igo Daijiten handy will be able to turn quickly to variations 6770 and 6771 of volume 2. 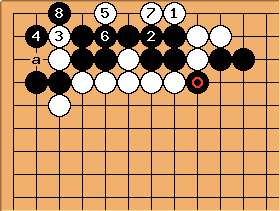 togo: Not only a is interesting. There is useful aji for the other direction. Note, that

are all forcing plays. 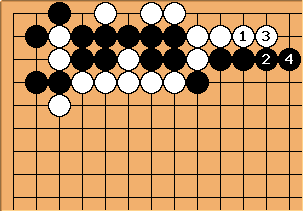 The "aji with the other extension" is nice when White crawls and survives. ... 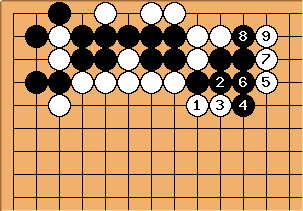 in this example has some endgame sente. 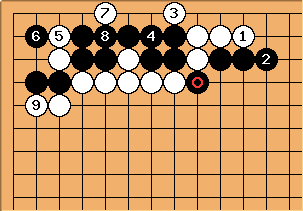 togo: There is also benefit for the regular closing-the-skirt play:

make it very much more sente. If Black had crawled one move more instead of

, this would only be about the corner, not the whole group.

Note, that not all moves before

have actually to be played; but without 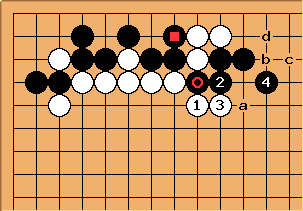 togo: Anyway, already the necessity of

Also the resulting black stones are in bad shape, exploited by White in this example (

in the given example is better than

Note, that with playing the aji sequence first White at c or d later are sente moves. 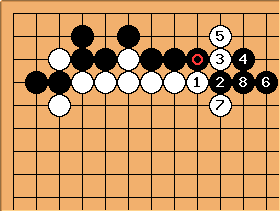 togo: ... this similar situation with different

. What is important, is that Black here has one move more and better shape (In addition to White not having that big aji).

Extension instead of hane 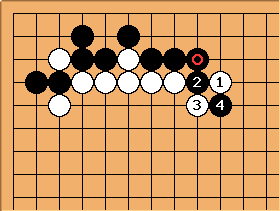 does not hane. The jump-ahead

can be thought of being prevented by the early hane.

here is on the same position as the original

. As with the original situation Black has played another stone to prevent capturing of important stones.

has somewhat the same role as the original

is already in place. Nonetheless this situation seems better for Black. 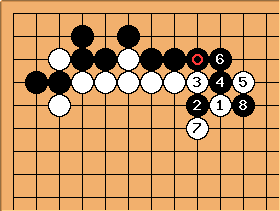 is not the early hane.

White's keima can be cut. This sequence again follows roughly the idea of the original early hane. And again Black has played another stone to prevent capturing of important stones.

has a similar role as the original

is already in place. Nonetheless this situation seems better for Black. 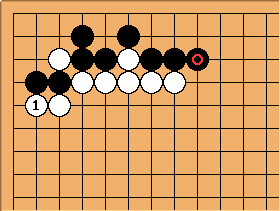 togo: The skirt close is not that sente without the extra aji: Only the corner now, not the whole group.