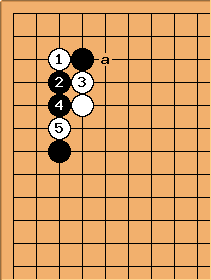 When Black crawls with

is tesuji. Without this move, the attachment

in the corner would not be playable for white.

White should not atari at a with 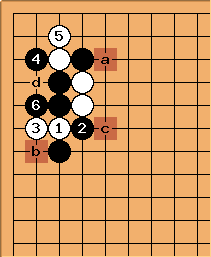 If black plays atari on the outside, the move up to

follow. Now, white has a choice. The normal continuation is the atari at a, but depending on a ladder, white can also bend out at b.

The atari at c is a mistake.

can also be played at d. 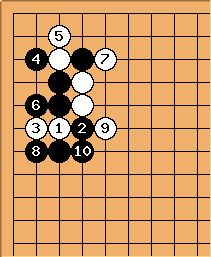 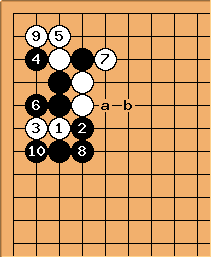 If black goes wrong with

, White gets a better result. White has sente and much more of the corner. The atari at 'a', for Black, is no longer as good a move. 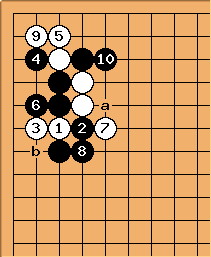 xela: I'm baffled by the amount of space given to this "trick play". First, shouldn't black just reply at 'b' instead of

, then white has to come back to 10 and loses sente? Second, all the variations given claim that black is better: where is the example for how black can be tricked? 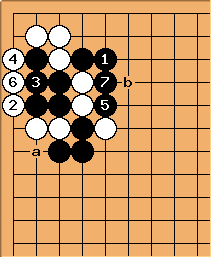 This is one possible continuation. White's play is inconsistent and presumably bad -- the lone white stone on the outside was presumably played to obtain influence. If White moves out with the two stones, for example 'b', instead of allowing 5 and 7 then Black can save the inside stones in a variety of ways, for example, 6 or 'a'. A fight then proceeds on the top side, one possible variation involves a ko fight. 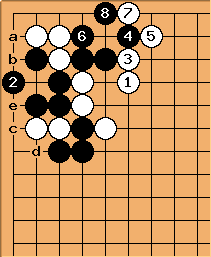 Note that the 'a'-'b' exchange is bad for white. White can never play 'e' because Black has 'd' to shorten the liberties on the two white stones (i.e., if 'c', then 'd'). A ko-fight results up to 8. If White loses this ko, White loses everything in this quadrant of the board. If White wins the ko, Black still has a perfectly fine wall on the left side and loses only a few points compared to the main variation. One presumes Black will win the ko ;). 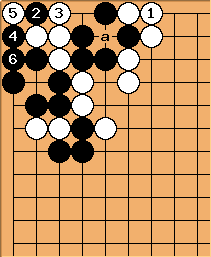 White cannot back down from the ko; if 1, then the tesuji at 2 kills White via double-ko. I.e., Black will either have the extra liberty at 'a', or will have a black stone at 5, threatening capture. 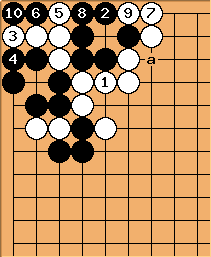 White cannot achieve a good result this way either; White dies in the corner and is left with a serious cutting point (i.e., gote). Playing 'a' first leads to the same followup sequence, only Black can delay answering 7 at 8 until White plays 9 or 1. White at 6 should be answered by Black at 8.

Black, however, can avoid the ko fight. 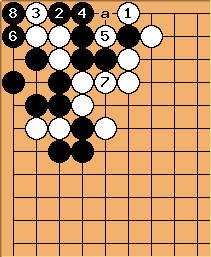 The result is better for Black than in the joseki, but not nearly as good as Black winning the ko. Note that white still lacks eyes, unlike the joseki. A move at 'a' would fix that immediately, but Black can aim at forcing White to actually play such a worthless move. 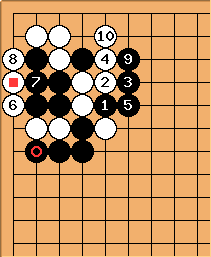 Black can also choose this way, if influence is more important, and the ko fight is hard to win. The circle-square exchange isn't terribly urgent, as it is essentially Black's sente. This result is similar to the first variation given for answering White's trick move; white has a bigger corner, but the open-skirt is now on the top side instead of the left side. This is probably good for black -- to have arrived at this variation in the joseki, before the trick, white ought to have influence on the top, and black on the left. 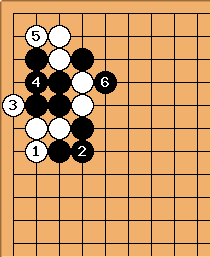 in the previous diagram, White can turn at

here. Everything depends on the ladder at 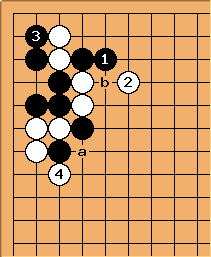 If the ladder doesn't work for Black, instead of playing a he must extend at

, there is a peaceful play for Black at b and a fight at a. 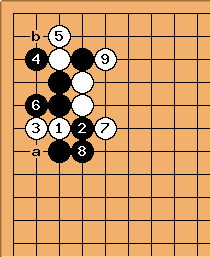 first is the wrong order of moves. Now,

is not sente since a is not necessary for Black to preserve the position.

So, White loses the initiative here. As a minor plus, she has b in sente later. 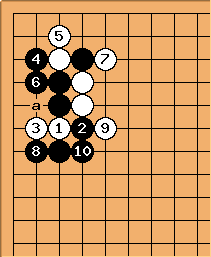 instead of 'a' is an idea proposed by Lim Yoo Jong. It leaves White no scope for variation (in the main line White can play

depending on a ladder), and White has fewer ko threats. On the other hand Black's eyes are a little less well defined. Click here for more analysis/discussion. 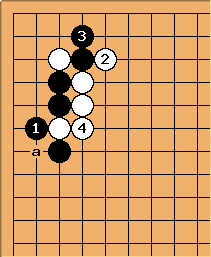 Here, it depends on whether White can cut at a and capture the black stone in a ladder. See pushing battles in joseki 8 for a fuller treatment. 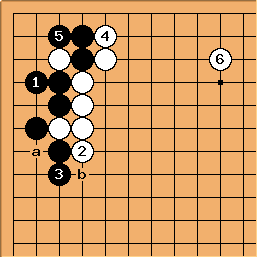 If the ladder works, Black submits with

, getting a low position but keeping sente.

to play 4; White cuts at 'a' and gets a ponnuki on the outside, or captures the 4 black stones in the corner. More importantly, and for the same reason, Black cannot answer 2 at 'b'.

are played in the wrong order, Black can double-hane, at 'b'. 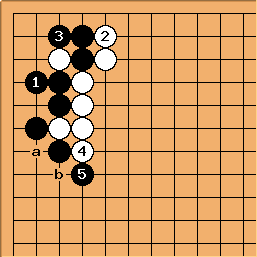 The cutting point at 'a' goes nowhere after the 2-3 exchange. It is usually impossible to severely attack 5 after the cut at 'b'. Indeed, the white cutting stones ought to come under heavy attack, considering black chose a pincer on the left side (so it shouldn't be dominated by white influence).

Guo Juan commented that an additional push is joseki. 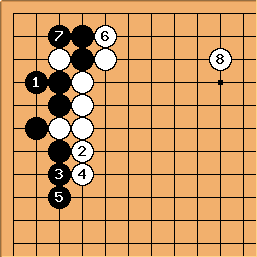 (to play 6) are not analyzed here. Presumably

should in fact be one line further away, since the wall is one line higher. One also hopes that it makes sense to play

in the prior variations) on the 4th line, since a wall this high is somewhat silly if there is black influence further down the right side (a reason to play 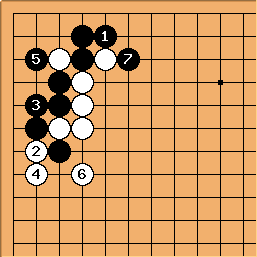 If the ladder doesn't work for White, this is joseki. 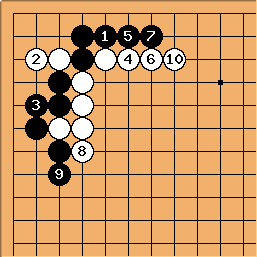 Black crawls on one side but gets ahead on the other. 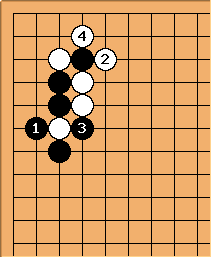 This variation occurs in the 11th Tianyuan title match, game four between Ma XiaoChun and Chang Hao. Locally, White's profit is considered better than Black's influence along the left side but Black takes sente.

Atari instead of tesuji 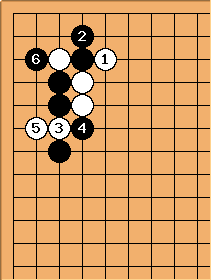 , then Black can play

and gain considerably compared to the joseki. This is a mistake 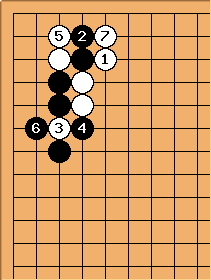 This has been seen in pro games, and ... 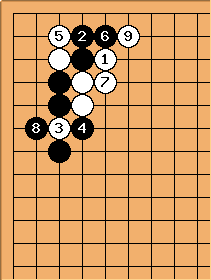 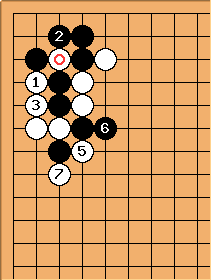 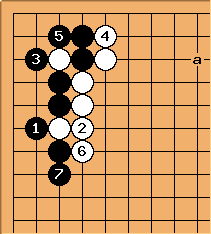 and this too! This is favourable for White, if there is an extension possible next in the direction of a