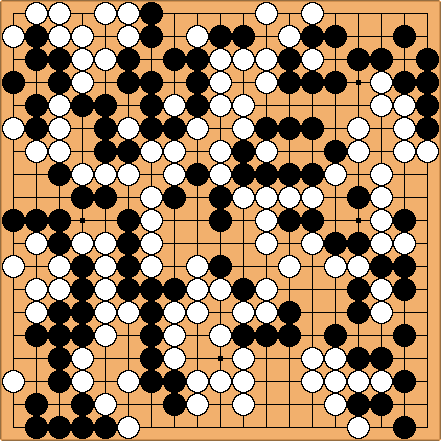 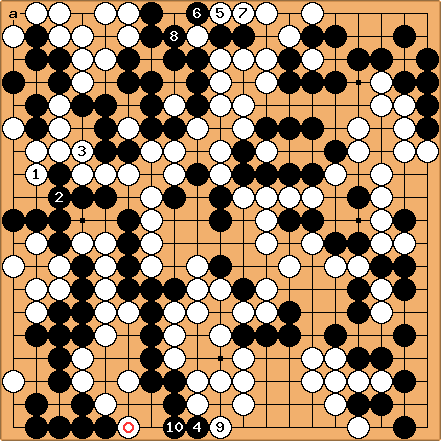 Black threatens to cut off a white group and White has to take defensive measures.

White 1: White has to connect at 3, of course, but this intermediate atari gives additional points and is sente.

White 3: White connects, otherwise the cut off group would die and the dead black group in the top corner would return to life.

BillSpight: If Black cuts, White can win the semeai in the corner with a reply at a. However, White loses 3 1/2 points in the corner and quite a bit in the center and top side, as well. The connection at White 3 is big.

Black 4: The move prevents White from saving a marked stone. It is interesting to compare the value of this move with the value of White 5 in the game. The most interesting question of the position is who wins a ko at the top.

It is a good place to note that most weak amateurs are afraid of ko. We see an example of quite a large ko here that both players try to avoid. But, naturally, one of them is able to win it. Thus one of the players is wrong.

Black 1 on the diagram threatens to capture four white stones at the top. White has to answer 2 and start a ko. This ko is fairly large. Playing at a, Black could force White to connect at 1 in sente, but this will probably give him 1 point more than what happened in the game. But that would be a safe variation if Black did want to fight it, becaue White could also force ko.

White 5: White threatens to capture two black stones, taking some territory from Black. At this point of the game White was behind, so, perhaps descent at

with following ko was a better move. White avoids ko as Black did on the previous move.

Black 6: This move saves two black stones. But is this the largest move on the board?

It is worth three points by miai counting. The right side is bigger, as is the bottom. --Bill

White 7: White connects her stone and threatens to take two black stones. Thus this is a local sente play.

Yes, but play the right side and bottom first. --Bill

Black 8: Captures White's stone and saves one of his own.

White 9: Having got sente at the top, White defends her territory.