One of the great properties of Go is that its rules are so simple that it is tempting to believe there can't be any game with simpler rules. Unlike other go variants, this page does not try to enhance Go by inventing new rules, but rather investigates if Go can be further simplified, and how its character changes in the process.

One-Eyed Go follows the same rules as go (e.g. Japanese Rules) with the exception that it is never allowed to place a stone such that your own group has no liberties[3], even when they would capture other stones. This renders the ko rule superfluous.

So how do these rules change the game? Obviously, there is no ko nor snapback[2]. But in other respects, One-Eyed Go remains remarkably close to Go. There are alive structures, which, however, require only one eye to live - hence the name. Counting of liberties and even many shape preferences remain the same. As unkx80 pointed out, there even can be oiotoshi[1]. Originally, I intended One-Eyed Go as an easier version of Go, to be taught to beginners before they learn all the rules. It came as a surprise to me that the game actually did not get significantly easier. The biggest surprise (although understandable in hindsight) was that there were many more seki situations than in regular Go.[2]

does not threaten to take

since White can not play inside the eye. 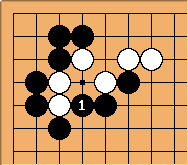 Karl Knechtel: Interestingly enough, when I was reading the introduction to this page I was thinking "there must be a lot more seki positions this way" a couple sentences ahead. I wouldn't have found it surprising at all. DominGo allows for a lot of seki positions for similar reasons.

This diagram is similar to "a little Game", with the exception that White has a ponnuki. It is a nice example for seki and snapback:

is a mistake - she should have played at a.

does not set up a snapback, because White can not fill the one-eye at a. Moreover,

is safe because White can not fill at b, either. Nevertheless,

was a mistake because her eastern group now only lives in seki.

[3] Thanks to DougRidgway for pointing out the misleading wording.

Evpsych: Are false eyes real in this?

(Sebastian:) Not always. the circled points are a false eye for W. But if it's White's turn, he can easily turn this into a true eye. Not sure if there are any examples that are irrepairable.

Evpsych: I wonder if the inventor of Go considered this variant, and if so, all the reasons why it was abandoned in favor of Go.

(Sebastian:) Good question. Maybe it just grew this way - it certainly wasn't designed on a drawing board. So it developed in a similar way as the letter "P", which was written "Π" by the Greek. At some point, some people just could get along well with this convention.

(Sebastian:) I tried a few with an absolute beginner. For me, it was a good challenge, because I had an additional handicap by having to relearn my conventional go wisdom. But it wasn't strategic enough to answer your question. If you like, we could play some games as an ongoing game. It should also be possible to play it on a go server (I'm Bashan on KGS), because the set of allowed moves in One-Eyed Go is a subset of the ones for regular go.

BobWhoosta: I would expect the original deviation from 1-eye go to 2-eye go came when the first person captured the first stones by playing in a place wherein he had no liberties... The conversation would be quite heated of course, and it seems our 2-eyed go had the better salesman/lawyer at the time. History was altered forever.

Bass: I am not a firm believer of the better lawyer theory. In this game living is easier (by several orders of magnitude) than in go, and even in go the moyo strategy is often questionable because it is too easy for the opponent to live. I do kind of like the fact that in this game, the 2-2 point is so high, that if there are no nearby stones, you can safely invade under it :-)

kolt? Couldnt this rule/variant have some situations where the only possible move would be a pass one?