A go variant I thought up (probably already exists, in which case please just link to the page in question). This was in an attempt to simply the rules. The whole ko-business is one of the most unattractive features of Go, I think. Esp. in Japanese and similarly complex rulesets. I think the superko rule is a very elegant solution, but what about eliminating even superko?

When a group's liberties is exhausted, that group just changes color (like in Othello/Reversi) instead of being taken off the board. Thus kos do not exist and there is no need for a superko-rule (or similar). Naturally, this variant would use area scoring (or just equate score with number of stones of your color). Superko or any similar rule is not needed because the number of stones on the board is strictly increasing (except for pass), so positions do not repeat themselves. This game seem to turn into an advanced form of Reversi.

Suicide is not allowed: this is the variant I originally thought of and will discuss below.

Some clarifications, due to Bill:

Color change: If a player fills the last liberty of an opposing group of connected stones, those stones change color.

No suicide: A player may not play a stone such that, at the end of the move, after any color changes, it has no liberty.

What are the effects of this rule change?

For one, it becomes a lot harder to live: 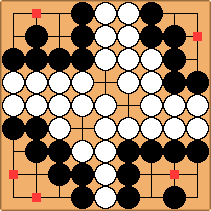 If White moves first he can kill either of these four black groups by going at the marked points.[1]

I am confused by the diagrams in the footnotes and I wasn't too clear about suicide and such, so here are some diagrams that shows how the killings would proceed: 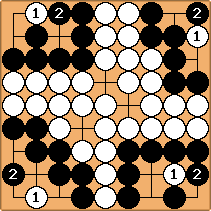 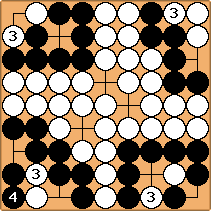 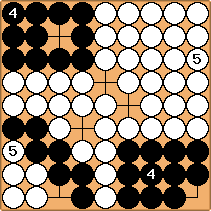 Black could not play in the upper left so he was forced to pass as Black 4. If Black had played 4 at

here, then it would be suicide which is not allowed. 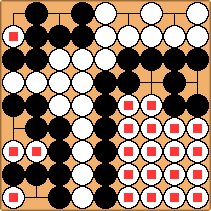 None of the dead-looking white stones can be captured, they all live in seki.

Large and empty eye-spaces now also start to look very killable because capturing stones do not help form eyes (rather, it takes them away). Because of this, not getting surrounded would seem even more imperative than in normal Go. At the same time, actually capturing stones might be less attractive (unless as endgame play) because it does not form eyes, and thus capturing a stone solidly will not bring the strength to weak group that it once did. For example, the value of capturing a stone in a ponnuki is reduced.

One interesting thing is that the empty triangle might have some value (or at least it might be more efficient than in regular Go), because it is more beneficial to get "solid" and square eyes, and not eyes made by diagonal connections. 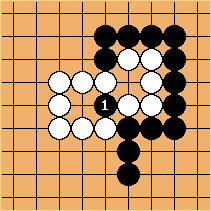 reduces the White's group to one eye!

Without ko the game should be easier for computers to handle.

I haven't thought enough about this to develop higher level strategy, but it'd be interesting to see how opening theory would change.

My guess is that playing into the center would happen much sooner (in the quest to surround quicker). Splitting play in fuseki will both be very valuable and dangerous, so one would probably use much tighter and more solid extensions...

This game does not seem as deep as Go because all of the complexities involving kos are eliminated and life and death (esp. l&d in corners) is vastly simplified.

(I'm not actually proposing we start to play this Go, I just think it is interesting.)

The second variant where suicide is allowed:

This game has to be played a little differently, because: any eye can be filled and life does not exist! The whole board turns into one big semeai that Black will "win" (?)if there's an odd number of intersections ... by filling the entire board with black stones! (And thus suiciding!)

So a special victory condition must be set, for example that if the entire board is filled with only one color then the player of that color wins.

But I don't think this variant would be a very interesting to play and think about, so that's why I don't elaborate on it that much.

An example of Reversi Go with suicide:

This move wins the game for Black.

It turns into this, which is (necessarily) a special exception from the "color-change on liberty exhaustion"-rule.

Bill: I like it! :-) And thanks for the clarification about life and death. It makes the following interpretation wrong. (I'll delete it soon.)

However, White cannot kill all these groups. 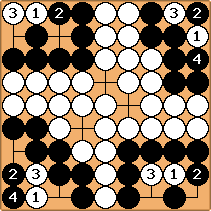 The top right corner stays Black, with no dame (!), when Black captures with

. The other corners become seki.

fractic: I'm not sure I agree Bill.

in the top right corner looks like suicide to me since the black group would have no liberties after the capture.

in the top right corner is played, somebody's stones change color. Since White is captured in regular go, I suppose that would be White' stones, not Black's.

fractic: And we need to rule out moves that allow making a group without liberties because if we do not we'd get something like this:

is a pass. So we get

Bill: Indeed. Perhaps, as I thought, a stone may not be played that leaves itself with no dame unless it changes the color of an opponent's stone. And, as in reversi, stones may remain on the board even if they have no dame.

captures the White stones, and wins by 9 points.

OC, it is a new game, and I have no real preference between these differences.

fractic: Moreover I think that the topleft can be killed since 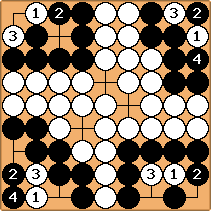 fractic: White gives atari in the top left and if black captures it ends in a kind of snapback.

fractic: Looking at this again I think black can make seki if we allow captures leading to groups without liberties. 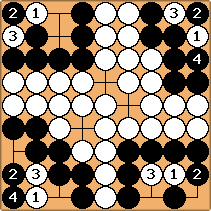 fractic: If it would be allowed to capture stones and live without liberties then

would lead to a seki. Other moves for

would also lead to a seki but with less points for white.

okvonnegut: I'm not sure I understand. The top left would go like this:

How do I indent diagrams? :) Just place > in front of all the lines?

Now what, for Black?

White plays in the eye and all the black stones are lost.

White can play this 2 because after black changes color,

will be connected to the surrounding white group which has liberties (two eyes).

fractic: Also the bottom two groups actually depends on whether moves like

in the top right are allowed. If so then it's seki indeed. But if not white kills. 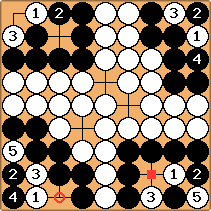 black wouldn't be allowed to play on the square.

Bleedo: This is a very interesting Go variant, although I'd really be scared to play it.

luigi87: A more interesting variant based on this idea is Steven Meyer's Conversion Go (

http://home.fuse.net/swmeyers/conversion.htm), in which a group of stones that touches at least two different sides of the board (corners belonging to sides) can't be captured, and so is alive.

Another idea: in Reversi Go, it might be interesting to never allow to place a stone such that your own group has no liberties, even when it would capture other stones. Making life would be easier that way. Update: I've tried it. It's very similar to One-Eyed Go, but maybe slightly better because it gets rid of the slightest hint of a cycle. Making life is much easier than in Go.