An idea I had for a variant while looking up some pages on SL about the various ideas people have had (UnusualGobans, SpecialStones and what not).

The premise is simple: Every stone played on the board is a domino, i.e. it covers two orthogonally adjacent intersections. You could play this on a goban either with several sets of actual dominoes (turned to show the dots for white stones; but I don't know how dominoes compare in size to traditional Go stones - you might have to make a custom Goban or something) or by enforcing the rule that each player must simultaneously play two orthogonally adjacent stones on his/her turn. All the other basic rules are the same; i.e. orthogonally adjacent intersections to a group are liberties, fill all liberties to kill, simple ko rules.

The original idea in SpecialStones for adding one or more 2x1 stones to a normal game was that they would be "useful for cutting or escaping"; this is still true when all the stones are 2x1, I think - that is, cutting and escaping have different properties. I imagine that ladders would be much less common in DominGo games.

In my opinion, however, the effect on life and death is far more interesting. A single one-space eye gives life! Naturally, since there is no way to play there. Meanwhile, a 2x2 eye still does not give life, as in normal go.

Below, please find my initial discussion of life and death in DominGo. I've included one puzzle and one unsolved problem so far. (Unfortunately, I'm not creative enough to come up with any interesting "tsumedomingo". ;) ) In the meantime, anyone up for a DominGoOngoingGame? I propose a 13x13 board for a first trial. Reason: it's customary to test new variants on 9x9 (cf SlidingGo), but since the stones are double the size in DominGo, we should double the board area - 13x13 does approximately that.

Here are some DominGo big eyes: (squares and circles are used in places to indicate adjacent stones composing a domino; this is just to verify that the positions can be legally obtained.)

A 1x2 shape fails to give life. Any 1xn shape is unconditionally alive - in some cases, even if several corners are missing - since there is no way to fill that space with dominoes. The 1x4 shape depends on sente: Here white can reduce the eye to 1x2 by playing ab or cd, while black makes life with bc. Notice that here the concept of a "VitalPoint" runs somewhat errant: the play that enables white to kill the group is not the same as the one that lets black preserve it. (A white play at bc would be seki instead.) The 1x6 shape also depends on sente, but this time white must play in the middle to kill. (In this case the situation is analogous to a 1x3 big eye in normal Go.) 1x8 and larger spaces are unconditionally alive: the circled and squared points are miai for Black to make a 1x1 space which gives life.

In general, any space of odd size will give life, but the opponent can place stones within that space for seki - and this is difficult to prevent. (Possible issues: how should territory in seki be counted for DominGo? Maybe we should use area scoring?)

The example of a 3x3 space is instructive:

In the middle of the board, white must play on every point except the centre of the space in order to capture; hence black is alive as soon as the centre point is occupied (the remaining space cannot be filled with dominoes). The same is true on the side. Other plays by black will also give life, since they reduce the space to one which cannot be filled or surrounded. However, in the corner (so these distinctions still do matter) there is a subtlety: after the 1-3 sequence shown, bc by white kills with outside liberties filled, so at some point black must play there to live. Either ab or bc will work, though of course ab is better. (Note it's not that much better, as white can replace one of the captured stones for seki.) In fact, the play at 2 does not help to save the group in the corner, but any other play inside the space in response to 1 (I lie. Can you find the exception?) will give life immediately. (With the exceptional play, black is still alive in gote.)

(Incidentally, another consequence of the domino properties is that the attacker has an easy time of making life for placements, and can fill outside liberties later if it proves necessary at all.) 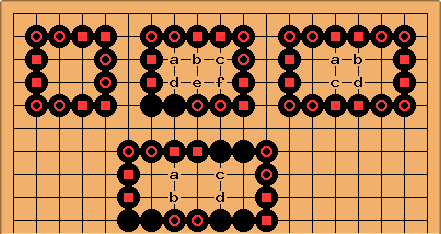 2x2 is a dead shape. 2x3 is killed by be; be also allows black to make life. Other plays by black result in death; other plays except ad or cf by white result in seki. 2x5 obviously is alive; ab and cd are miai to split the space in two parts. I'm not sure about 2x4; if there's a killing play for white it must be either ab or cd, since otherwise either ac or bd will be possible for black. Here the plays are equivalent; does it matter if the group is on the side whether white plays on the first or second line?

More to come. In general it looks like seki becomes much more common in such a game and invasions will more often be successful. Perhaps it's not even appropriate to speak of these as seki situations: a 1x1 space on the board cannot be occupied even if multiple and-or different colour groups surround it. It behaves more like a double eye for each surrounding group. Think of it - up to eight eyes from a single space!

I believe the 2x4 big eye is seki, no? White 1 is answered by black 2, thereby creating a point a such that nobody can play.

(Yep. Attempting to prevent seki proves suicidal. This is contrary to my original analysis, which had white continuing to play, making a throw-in and getting seki anyway. But it turns out that white doesn't need all that. :) )

Another question: how much territory does black have in the position below?

Just half a point!

(Again, yes. Well, if you use rules that split points in seki between the players, I suppose black has 3/4 of a point here. ;) )

Tas: Do you call this seki?? I'd say both black and white is alive and that a is dame.

[Ralf Gering:] An almost identical game was invented by the American R. Wayne Schmittberger in the early 1980s. He named it "Domino Go", which is a variant of his "Omino Go Family". The game was described in his bestseller "New Rules for Classic Games". The only difference is that in Domino Go you may also play single stones. Other interesting variants of Omino Go are Tetromino Go (play 1-4 edgewise connected stones) and Pentomino Go (1-5 stones). I love Tetromino Go most which could be called "standard" Omino Go. Black may only play up to two stones on his first turn to diminish his first turn advantage. In my opinion, Tetromino Go leads to very aesthetic shapes (especially, if played with quadratic pieces on squares as suggested by Schmittberger) and is, in regard to this, even superior to normal Go. The orthodox game is played on a 15x15 grid. The Chinese counting is used.

(Sebastian:) Would you have an example for what it looks like?

KarlKnechtel, coming back to this idea years later...

It occurred to me the other night that it would be interesting - in the category of "asymmetrical" games - to have Black play dominoes and White play single stones. This seems not to be the huge handicap that one might initially assume, because White only needs to make single eyes*, Black nakade are more easily compromised, and almost everything that looks like seki or ko is actually won by White.