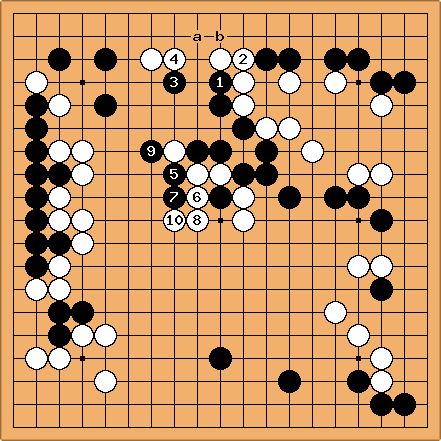 Lucky: White 90 - White is a little behind but not desperate.

HolIgor: Black 87. I am not sure if this, second push is necessary. Black is looking for a sente connection here before playing large moves.

Lucky: Sorry to say so but White 84 is a mistake in direction. See here a better play NYR2002 - W84 variation.

ChessWhiz: White 84, good enough for me.

dnerra: White 82 - did I mention I like to grab the obvious plays? By the way, Black 81 gives up some options exploring the weakness of the white diagonal connection, e.g. by playing Black a or b. Maybe the additional strength Black got is not worth this investment?

HolIgor: Black 81. Three days have passed. Since nobody is playing for Black, I will continue with my plan. 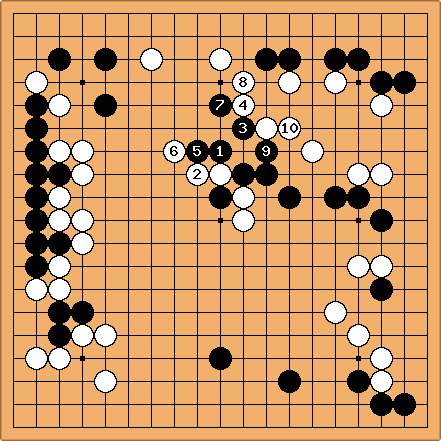 HolIgor: Black 79. As promised I play moves for Black, if nobody plays for days. If somebody wishes to change the move before the opponent replies, then, please, do it.

Black takes a shape point. White's move there would be painful and sente.

Lucky: White 78 is the only move. It's a move you want to play even if the opponent doesn't force you. In this respect Black 77 may be questionable; Black can try something else, waiting for the chance to play 78 himself. It is very good to connect weak groups: now the resulting big group is alive and so can be considered strong for the time being.

AvatarDJFlux White 78: I know it may be not severe enough, but it is sort of shapeful, it connects two weak (?) groups - so now we have one, big, weak group... ;-) - and, I hope, it keeps sente. Waiting, as HolIgor is, for your critics!

HolIgor: Black 77. I believe that this point is shapeful. I could not see a way to cut White, so this move gives at least a hint for an eye. Criticize, please.

Lucky: White 74. I don't think that Black is so bad. After all he has more territory. If he can handle this fight the game should be OK for him.

HolIgor: Black 73. As promised in order to end this game by New Year 2003, I'm making a move for Black when nobody replies for a while. This is my second move in the row. Black's position is quite difficult as taking the territory along the loser's line (second line) leaves too much power to the opponent. But it is not hopeless yet.

ArnoHollosi: looks to me like this is another turning point. Depending on my mood I would either connect the cut with 73 or storm abead and initiate an (unreasonable) death battle by trying to save the cut-off black stone. If Black plays 73 he cedes the center to White.

On the other hand, maybe there is an effective attack against the white group on the upper right? If so, then the connection would be sente and Black could storm ahead. If the connection is gote and White expands her center, can Black still win?

Hm, looking at it again, the connection seems sente. After all, White has two lonely stones at the top to look after as well. 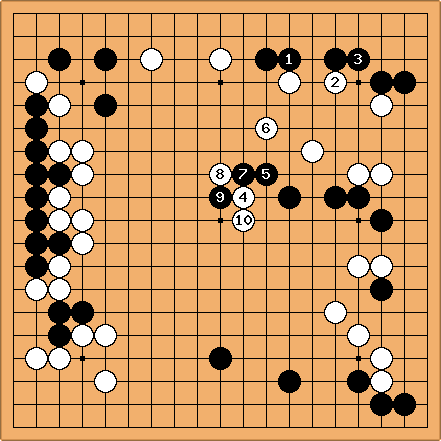 AvatarDJFlux: hmm, nobody wants to play for Black? :-)))
(Either my move is so hideous nobody wants to continue or it is so clearly a winning one to have the same effect... ;-))) Most probably it is the first of the two!)

: What to say, I'm playing for White, but I'm just too b....y afraid of making stupid mistakes... ;-)
Luckily there's Lucky to mend things%%% Now, I'm not able to see anything else than this move...

. Cut then think :). I played for White last two games.

, hmm, nobody wants to play for White?

: Just to get the game going.

-- now we have top play here, after all this effort...

, let us see where White is going with this. Black stays strong in the upper right and secures his territory there. If White wants sente in the center, I think that she can not completely fix up the shape of the upper right White group. 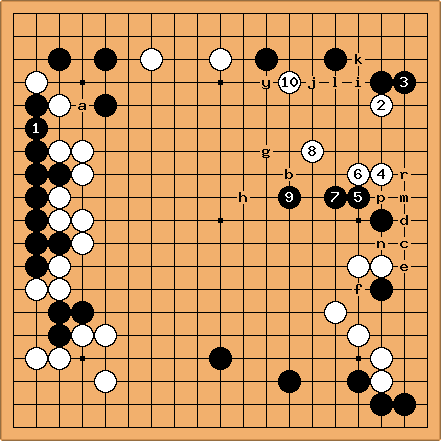 Lucky: I also think this is a very interesting position. I would like very much to play h with White. I think White should find a way to do this with good timing. I start with White 60 to see how Black will answer.

AvatarDJFlux: Lucky, after this exchange is over, would you mind saying something about the choice of White 60 compared to y or y+j? (The moves I (3k) would have chosen...)
If I were to play White 60 in an actual match, I would fear a particular black answer... We 3k are full of fears... ;-)

dnerra: How about discussing White 60 a little before we play? One thing I wonder is whether the White c, Black d exchange would be good for White. (It prevents the sequence starting with Black e that Arno has discussed -- it would steal the white territory on the right and create a extremely bad cutting point.

The natural flow would be to continue with White g, Black h. But once the black group in the center is settled, this would mean that the influence of the white wall might get wasted. I would like to play at h instead, and hope that the white group in the top right can still make life with something like White i, Black k, White l. But it still looks like a bad overplay, and so I didn't quite dare play it...

DJ What about d as an alternative to c?
Is the sequence White d, Black c, m, n, e plausible? Or any good?
From the other side: White d, Black m, c, p, r: as Black already has 53 there maybe it is not too serious that he has also p and m... Then White could play kikashi maybe at j and y as an alternative to i...
Also, I wouldn't mind Black playing h: isn't a wall supposed to lie there, waiting and threatening? ;-))

dnerra: As for the aji of Black at 'e', I think Lucky has clarified this a bit. With respect to your sequence starting at White d -- I think after White d, Black c, White m, Black would play at e himself -- let's look at this in NYR 2002 - move 60 White underneath.

About Black playing h -- yes, it should rather be for the opponent than for us to worry about our wall, but on the other hand, a move like Black h is just about ideal to devalue the effect of the white wall...

JoeSeki OK, this comment confused the heck out of me. Probably because I don't understand how to use thickness properly. It was my understanding that you don't use a wall to make territory in front of it. A wall or thickness makes territory by attacking a group. Thus running Black into the wall is a good thing. It uses the wall properly. Territory for White should develop naturally from the resulting attack. The real question to be asked is: Where is this territory going to happen for White? Chase Black in such a way as to make that happen. So where is the developable area for White? I think it's in the lower middle or bottom side. Is my thinking all wrong here? Shouldn't White be using that wall, and love to see Black rushing headlong at it? As Black bounces off the wall White steers the floundering stones in such a way as to develop another attack (splitting) or take territory. If I don't even have this concept right, I'll never get stronger :)

Arno: I don't think that White can use her wall for attack right now. Sure, Black should be careful in its presence, but right here, White should use the wall to build territory. Do you really think that White can chase Black effectively? Black has rescue stones at the top and at the bottom, and White can block the way only in one direction.

Building thickness and influence is nice, but there comes a point where you have to "cash in" on your influence and make it territory. Most of the time this is done while attacking another group. Here, White caps (=attacks) Black from the center, thus building territory in front of the wall and cashing in. Draw an imaginary line from the upper border of White's wall to h to the lower border. If White can enclose this much territory, she makes 40+ points in the center.

Can you show me another attack strategy that allows White potentially to gain that many points? I don't see any. If you think of White's wall not in terms of thickness, but in terms of a moyo, you will agree that extending one's moyo while attacking is very beneficial. That's exactly the case here. Of course, White has to keep an eye on her weak groups on the right side as well, otherwise Go would be too easy a game ;o)

dnerra: Oops, now Arno already posted a good comment while I was editing the page, too... Anyway, I think Arno's and my explanation may well add to one another, so here is what I was going to say:

I think you got the concept right! It's all about details, just too unfortunate they are so important... :-)

I think I explained a bit badly. Let's rephrase it a little: The exchange White at g, Black at h feels a little like pushing from behind. The point g is pretty neutral, while h is useful for both sides. (And if we are attacking, it should be the other way round! We should play useful moves, while the opponent is running away on neutral ground...)

The question is: If there is no effective attack against the black center group after White h, Black g, then the white wall is wasted. So it is all about how weak the black center group is after the attack. My comment above assumed that Black isn't very weak anymore after Black h . This is certainly debatable. (Note also that the white wall isn't that magnificient either. There is a peep at s and a cut at t.)

And about walls and not making territory with them: Don't forget you are allowed to create moyos with your walls. And walls do like to have extensions. The worst that can happen to a wall is a not-too-close and unattackable opposing group sitting in front of it.

Lucky: Arno and dnerra explained wonderfully the situation. It is not always good to chase an enemy group into your zone of influence. If the group is not weak enough you won't be able to gain anything. It's like running the opponent in a ladder that doesn't work: although he is in atari at every move it's you who lose more. I think this is the case here.

Hint :) The upper right side white group is quite weak, White should strengthen it before playing h. A leaning attack against the upper right black territory is called for. White must keep for a while the option to play g, depending on the attack's result.

Warranty :) This is only my evaluation and in no way can be considered absolutely correct. I already decided for a move but any other idea might be better.