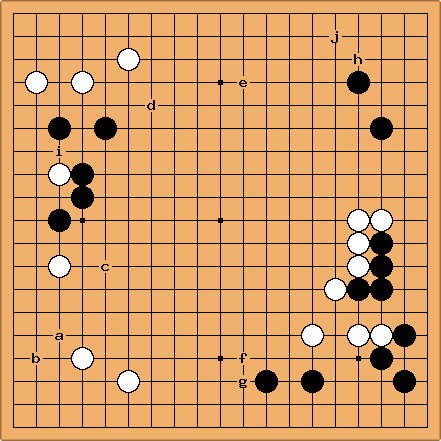 Dieter: What is the largest move here? (White to play). I know how Lee Chang Ho continued and I have an analysis of my own, but first I want to know what you think.

zinger: At a quick glance, I think I would add a move to wrap up the bottom left corner - perhaps a or b. There doesn't seem to be anything else too urgent going on.

JoelR: That's very interesting. I find it hard to remember that sometimes the best move is a passive one, locking up a corner. a looks bigger than the other quiet area, the lower side.

A move I considered is c, which is at the boundary of two structures, so might qualify as a focal point. It reinforces the stone to its left and threatens to make extending on the bottom worth more.

The upper side is the last wide open space. Is d useful? Which approach to the upper right is best?

Andrew Grant: I'd play e. The upper side looks most important. Black is ahead in territory so a defensive move at a or b seems too slow. And c and d are too close to Black's strong group on the left side.

Alex: I kind of feel like leaning at f, try to make miai of blocking with g and taking the lower side, or else building a cental moyo. But e looks okay to me too.

Andrew Grant: The problem with f is that Black's position in the lower right is strong and solid. Black doesn't need to answer locally (not even after White follows up with g), and would probably reply at c to erase any potential moyo. The lower side generally is non-urgent.

Andy Pierce: How about the contact play at h? Neither continuation on either side looks that great for black to me.

Herman Hiddema: I'd find several of these moves reasonable. One thing to consider is the fact that white can play i, thereby undermining the black group on the left. That way a play like a becomes a double purpose move.

Bill: My thought was j, to get something from White's thickness on the right. 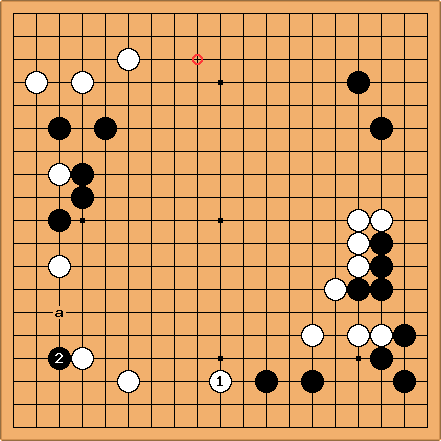 . The move surprised me because it is so close to Black's hypersolid one space extension on the third line. Alexandre proceeded to invade at

, but Lee said a was the right place to invade.

would have been way down my list of candidates, if I considered it at all. On the bright side, one of two pros seems to agree with me that the bottom left corner is big. Too bad it wasn't Lee :)

Velobici: Go4Go has the game record. It is the first round game from the 3rd Toyota Denso Cup between Lee Changho and Alexandre Dinerchtein. Tournament pairings are often (always?) designed to protect the strongest players until the final rounds so that the semi-finals and finals are (hopefully) the most exicting games. See Group Pairing.

Link to game record in Java applet. There is a lot of play in the bottom left. Eventually white ends with sente and plays at the marked

in the above diagram seems to be to force black to invade the lower left immediately. 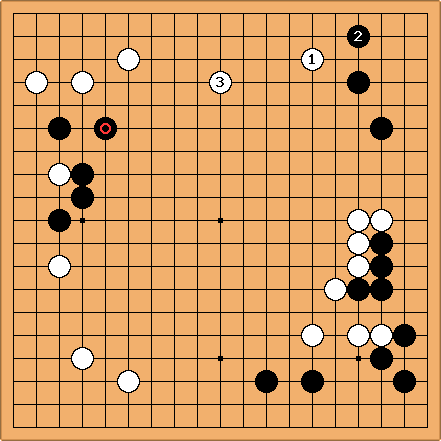 Dieter (ctd): The largest open area seems to be the upper side. But it is indeed hard to find a good move there.

provokes securing the corner with

and the marked stone makes it difficult for White to construct something at the upper side. 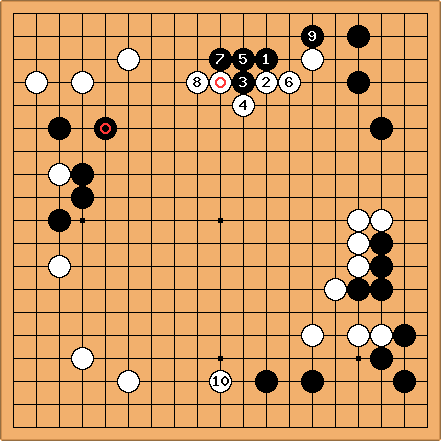 Dieter: (analysis ctd) Black invades and gets the territory. Next White will play on the lower side (

) anyhow. So perhaps it is best to play there in the first place, and leave the choice to Black on how to handle the upper side.

Bill: I think that the invasion is a refutation of

. (How about a two space extension?) It shows the pall that

casts on the top side.

Andrew Grant: I think this problem is a good example of the pitfalls of playing through professional games. While I won't deny that Yi Changho's move is good (who'd believe me if I said otherwise?), I only accept this because Yi played it. It can't be denied that it violates a fundamental principle of Go - "Don't play near strength". To be honest, I'd still play e in a game, and if I lost, I wouldn't blame that move for the loss.

I think that it's more important for amateurs to learn the basic principles of Go than to worry about clever exceptions.

Bill: I do not know if there is a professional consensus on White's best play here. If Lee Changho's play is the pro choice, that's important information, at least for amateur dan players.

Velobici: the pro choice ??? Certainly its a very strong professsional's choice in this particular game. I would want to hear the opinions of other professionals before considering it to be the pro choice. Could this really be the only move? 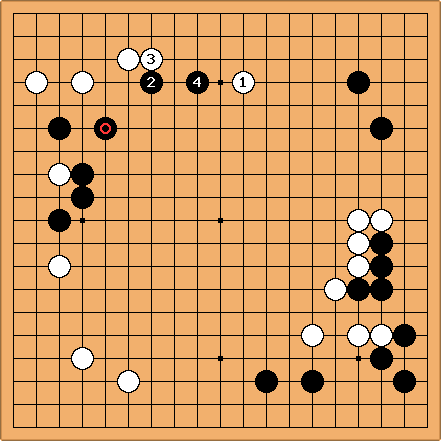 here. It leaves open the possibility of

, I don't really know what

Bill: To second that, this again shows the power of

George Caplan This is a really good example of how strong pros are. As we apply principles, it is hard to for us to justify this move. Hopefully, there is nothing wrong with our principles, the pros know them as well, but their reading, and understanding of miai is far beyond us. We may see moves that seem bigger than this one, but Lee may be reading miai trees moves into the future - and reading - that down the line - he can trade bigger moves but this move - smaller than some miais, is bigger than the next move and so finds a path to play it now.

Dieter: Well, I agree to disagree with that. The point of this BQM to me is not that pros can disregard principles because they outread them, but that pros apply the same principle (do not play close to strong positions) in a different way. Let me return to the position 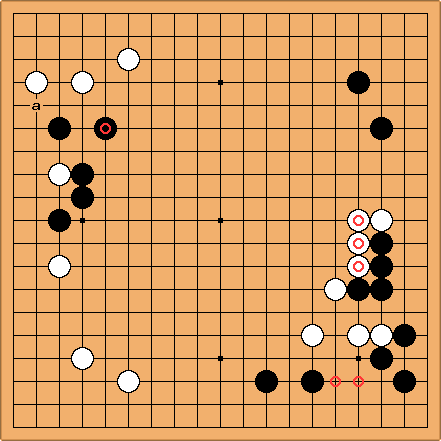 As to the pro vision. Nowhere in his commentary, Alex seemed to be surprised. Later, a was just as obviously still bigger than the upper side. 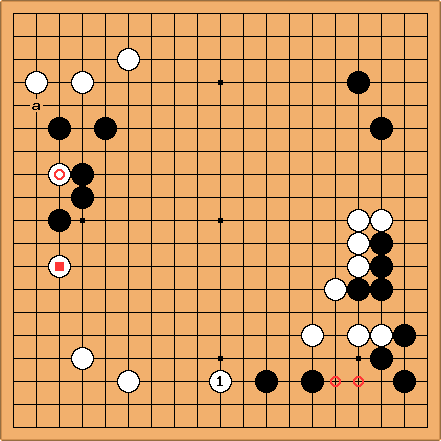 Andy Pierce: I wonder if white's thinking process could be as simple as: