No, I don't think that the bamboo joint is bad shape ... but.

This was triggered by a discussion on shape and was also discussed on rec.games.go (Autumn 2000, I think).

The 'but' above comes from the fact that a bamboo joint has several 'defects' and is therefore often not the best shape to play in a given situation. (See bamboo joint for examples of shapes to which it obviously is superior.)

These defects (as I see it) are:

(See the bamboo joint may be short of liberties, and look

here for an example.) 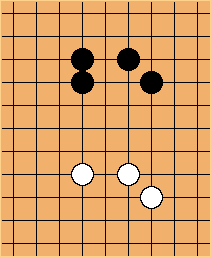 The black shape at the top is an alternative which, in almost all cases, is as connected as the bamboo joint but at least is slightly lighter and has a slightly better eye potential.

The white shape at the bottom has lost some connectivity but gained speed and flexibility.

I am not trying to say that the bamboo joint is bad, but merely that there are sometimes other options which are better.

(I think this is a controversial statement and have added it to that list. --Stefan)

Anonymous: This is actually a shape called Trapezium Shape.

Bamboo shape on its own, without the opponent's stones, misses the point. And the point is that it gives a safe connection and at the same time creates more influence and a wider base for escape.

Of course, it has disadvantages, amongst which the obvious is a ko threat. The fact that you can sacrifice part is an advantage, though.

Another disadvantage is that sometimes you regret that you did not take that liberty from your opponent.

But if White plays

here instead of at

or the bamboo joint, she is usually better (a weakness remains though). --HolIgor

This had to happen: I have exactly the same remark and wrote it simultaneously with HolIgor. #:-7

There is a problem with the shape you suggest: 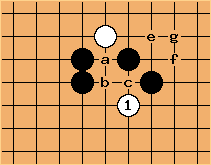 attacks the shape of this black group. Black has to connect, but in any of the three options a, b, c, Black is left with an empty triangle.

I agree with all your comments - like I said, I just wanted to warn against always playing the bamboo joint.